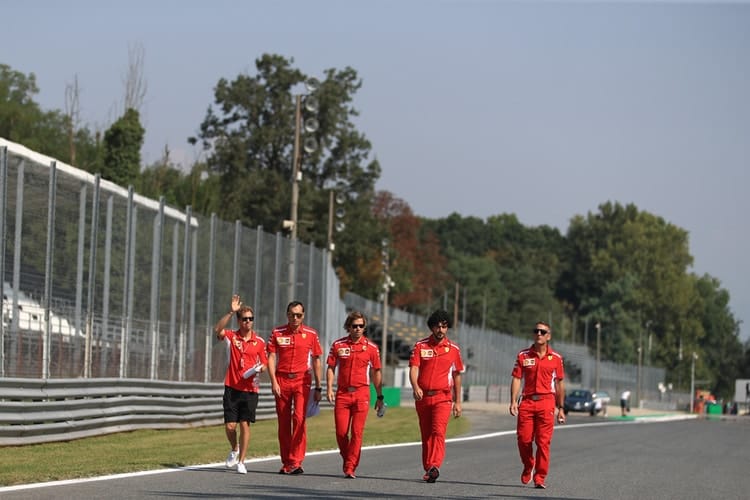 Eight years ago was the last time the Autodromo Nazionale di Monza witnessed a victory for one of its own in Formula 1. Fernando Alonso‘s dream home debut in 2010 proved to be one of five Alonso victories in an ultimately trophy-less season for Scuderia Ferrari.

Wind the clock forward to this week and Sebastian Vettel is in the wake of celebrating his own fifth win of the season, with a further eight rounds of the 2018 championship to go. He has experience of winning at Monza in a Ferrari powered car; the rain-drenched 2008 edition of the race proved to be arguably the greatest drive of his career in the midfield-running Toro Rosso STR03.

A repeat of that pole position and win will surely satiate the German a decade on and close the gap to championship leader Lewis Hamilton by a further seven points, at the very least.

And, once again, you sense there is an air of expectation amongst the perpetually demanding Ferrari fanbase. During their peak years, Monza was locked down as Ferrari territory. Between 1996 and 2004, David Coulthard for McLaren in ’97, Heinz-Harald Frentzen for Jordan in ’99 and Juan Pablo Montoya for Williams in ’01 were the only non-Ferrari drivers to have won at the ‘Temple of Speed’.

They arrive in northern Italy as the favourites after Vettel’s commanding win five days ago in Belgium. Mercedes AMG Petronas Motorsport seem to be stumped by the speed found by Ferrari and are desperately scrabbling around for answers. They haven’t been helped by the media frenzy whipped up by Hamilton’s “trick” comments about the SF71-H, which turned out to be much ado about nothing. 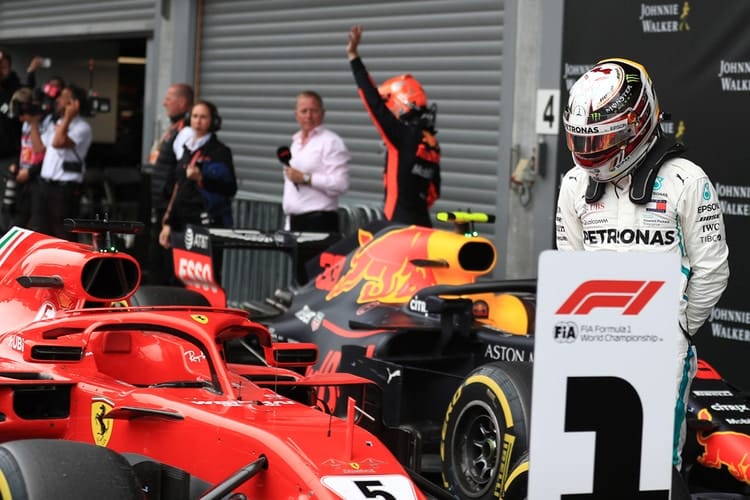 For the first time in the V6 Turbo Hybrid era, Mercedes-Benz are no longer the benchmark in terms of engine performance. Ferrari have found pleasing reliability whilst conquering their dual-battery system to make the car the punchiest of all out of the corners and, thanks to Shell‘s special ‘rocket fuel’ additive, their straightline speed proved to be too much for Hamilton and Mercedes at the Circuit de Spa-Francorchamps.

For all the positives, questions still remain about the car’s wet weather performance. Despite my waxing lyrically about the skill shown ten years ago, Vettel will be hoping for a firmly dry weekend in Lombardy or risks ceding another pole position or – worse – a win to Hamilton, Formula 1’s undisputed ‘rainmaster’ of the 2010s.

Torrential rain greeted Formula 1 for qualifying a fraction under 12 months ago. Romain Grosjean was an early casualty, aquaplaning on the long pit-straight and ending his afternoon in the barriers. Hamilton took a convincing pole by over a second from Aston Martin Red Bull Racing pair Max Verstappen and Daniel Ricciardo. Adding insult to Ferrari injury, the result meant that Hamilton overtook Michael Schumacher‘s record for the most pole positions in Formula 1.

However, Williams Martini Racing‘s Lance Stroll was the star of the show taking a provisional fourth on the grid, which was elevated to second after the Red Bull duo’s respective engine penalties. At the age of 18 years, 10 months and five days, the Canadian became the youngest ever front row sitter.

In a gritty race, Hamilton never looked troubled at the front, taking a fourth career victory at Monza ahead of team-mate Valtteri Bottas. Vettel trailed in third, 32 seconds behind the Finn with Ricciardo in fourth. The Australian produced the show for the fans, moving up the field with clinical precision; the highlight being an audacious move on Kimi Räikkönen at the first chicane.

With that, Hamilton moved ahead of Vettel by a mere three points heading into the Asian leg of the season. No one knew at the time, but the season was set to unravel very quickly for Ferrari.

What else to look out for?

The battle for fourth place is just as intense as the fight for first in the Constructors’ Championship. The new Racing Point Force India F1 Team are no longer a serious threat after being stripped of their pre-takeover points, but due to the Renault Sport Formula 1 Team failing to score in Belgium, Haas F1 Team‘s double-points finish has moved them to within three points of the French manufacturer.

Nico Hülkenberg‘s chances for points in Italy looked slim already, due to the lacking performance of the Renault Sport power unit, but a ten-place grid drop for the mistake that led to the horrifying first corner crash at Spa may prove to be the final nail in the coffin for his weekend.

Carlos Sainz Jr.‘s performances have fluctuated in 2018. The Spaniard believes that he is unlucky to be 22 points adrift of Hülkenberg due to varying reasons, but the numbers don’t lie. With fewer retirements in comparison to the German, Sainz Jr. needs a positive end to the year in order to join the McLaren F1 Team on a high.

Haas, meanwhile, have seemingly put the inconsistencies that plagued their first half of the season to one side and gathered real traction. With 76 points, they have equalled the number they scored in their first two seasons combined; a fantastic achievement for a team created and run smartly. Kevin Magnussen would like nothing more than to put one over on his former employers after leaving acrimoniously at the end of 2016. Whilst Grosjean left the Enstone team on more amicable terms a year prior, the Frenchman is keen to make up for a disastrous start to the year and stake a claim for a drive next season.

The Italian Grand Prix 20 years ago produced one of the most unforgettable races of a thrilling 1998 World Championship. Some things fail to change in the modern-day, it was still Ferrari v Mercedes power – albeit the latter propelling a McLaren.

After a controversial and thoroughly wet Belgian Grand Prix, that saw race leader Schumacher smash into the back of Coulthard whilst lapping the Scot in appalling visibility before trying to fight him in the McLaren garage, Mika Häkkinen held a seven point lead over the German.

Schumacher took pole from reigning champion Jacques Villeneuve and Häkkinen, but could not hold the lead on the run down to the old Rettifilo. Häkkinen’s awesome start propelled him to the front of the order ahead of team-mate Coulthard, Eddie Irvine, Villeneuve and a lacklustre Schumacher.

Schumacher recovered out of the chicane to pass Villeneuve and No 2. Ferrari Irvine, before the lightly-fuelled Coulthard swept past Häkkinen, who was now struggling with his brakes. With a nine second gap to squabbling pair behind him, Coulthard’s engine let go in spectacular fashion on lap 16 around the Curva Grande, blinding Häkkinen with oil and smoke going into the Variante della Roggia. Schumacher took advantage of the handicap, braking early and getting a perfect run on the way to Lesmo 1, drawing alongside the distracted McLaren before passing on the inside despite a robust defence.

The then-double World Champion pulled away with a number of blistering laps, Häkkinen trying to respond. With a few laps remaining, Häkkinen’s rear brakes malfunctioned, sending him flying into the gravel trap backwards at La Roggia. With Irvine over half-a-minute back in third and Villeneuve out, Häkkinen kept the car running and recovered, alleviating all pressure from Schumacher who claimed a sixth victory of the year.

Irvine took advantage of the ailing McLaren to take second and a Ferrari one-two, with Michael’s brother Ralf doing the same and completing the podium for Jordan. Häkkinen’s three points for fourth meant that with two rounds to go, the championship was level on points.

WILL IT BE ON TELEVISION?

Alternatively, you can watch the action via F1 TV, but only in selected countries around the world.