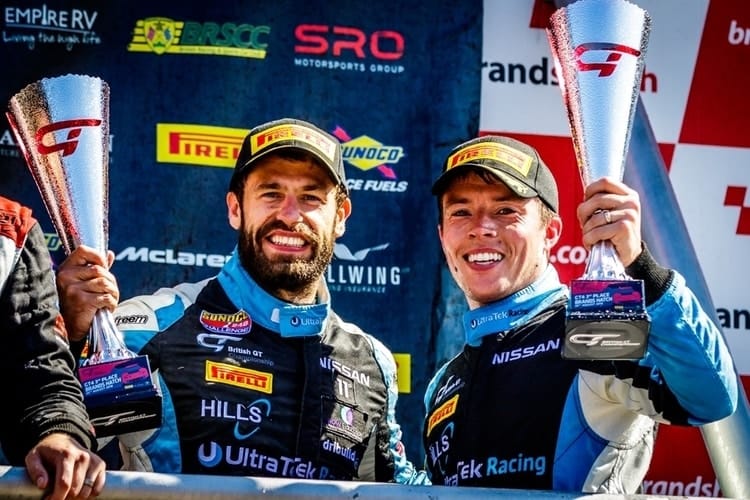 UltraTech Racing Team RJN claimed their maiden GT4 podium in the British GT Championship for the number #53 Nissan 370Z GT4. Kelvin Fletcher and Martin Plowman have closed the gap to the GT4 Pro-Am leaders to just 3-points, making it all to play for ahead of the final round at Donington Park on 22-23 September.

It was a scorching weekend at the Kent circuit, which set the stage for a storming race for the number #53 UltraTech Racing Team RJN Nissan 370Z. Fletcher was first in the car, executing the team’s tyre-conservation strategy to perfection.

After losing places at the start of the race, Fletcher began regaining ground 10-minutes into the race; jumping to fourth in class. And with 15-minutes gone, he closed the gap to GT4 Pro-Am Championship leader, Nick Jones, in the number #66 Mercedes AMG GT4. Fletcher then passed Jones for third place. However, Fletcher’s progress was somewhat thwarted by the deployment of a Safety Car, thus bunching the field up with 28-minutes gone.

And no sooner had the Safety Car been withdrawn than the number #55 Ginetta and one of the Jaguars had a mighty collision on the pit straight, severely damaging both the Ginetta and the barrier. This meant that the Safety Car was required once more to lead the field through the pit lane so the barrier could be repaired.

So by the time the pit window opened, Fletcher was third in class and shortly promoted to second position with the leading number #86 Stellar Performance Toyota GT86 GT4 spinning off track.

A great pit-stop by the RJN crew and a great in-lap by Fletcher saw Plowman emerge second overall in GT4. Plowman had a 7-second advantage over their championship rival, Scott Malvern, just 2-seconds behind the leading McLaren.

With 40-minutes left in the race, Malvern closed to gap to Plowman, which saw his Mercedes loom large in his mirrors. Plowman was able to execute a masterclass in defensive driving and was able to resist the incoming attack from the Mercedes.

Then with 20-minutes to go, Plowman caught the race-leading McLaren, who was starting to feel the pressure and received the warning for track limits.

But with two laps to go, the number #42 BMW of Ben Tuck grabbed second place with a double pass on both Malvern and Plowman in the dying phase of the race. Despite this, the race delivered the first-ever outright GT4 podium for the team to close the gap to the GT4 Pro-Am leaders to just 3-points.

After the race, Martin Plowman commented, “It was an Incredible day for car 53, we closed the gap to car 66 in the championship against the odds. I think it’s fair to say that they were much stronger than us this weekend, so to take points away from them when we were not at our best is a dream come true. It’s all to play for at Donington now, we’re going to have to go all-in to get the best out of our car and strategy as Scott and Nick in their Mercedes will be very hard to beat.”

Kelvin Fletcher commented, “This podium has been a long time coming, it’s a great feeling to be standing on the overall GT4 podium. We’re going into the last round fighting for the championship and with just 3 points in it, it’s going to be a belter. This is why we love racing.”
The duo will now enjoy a few weeks break away from the track before the championship finale at Donington Park on 22-23 September.
Share