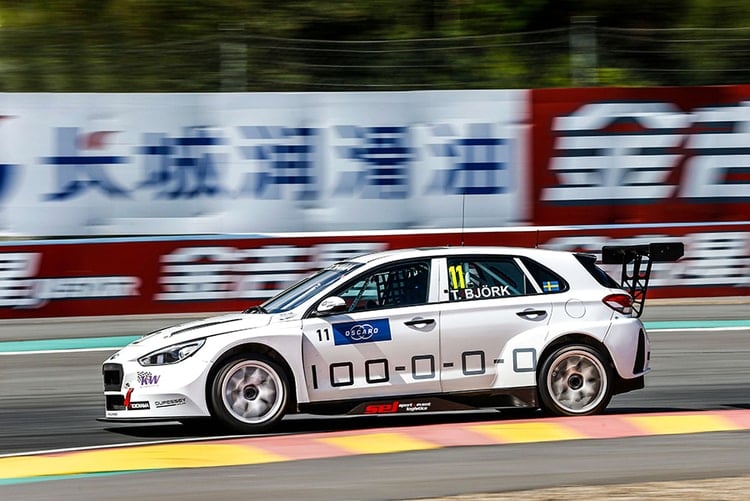 The World Touring Car Cup (WTCR) has returned from its lengthy summer break and arrived at the Ningbo Circuit in China this weekend. A former quarry, the circuit is a relatively new construction, with only a few of the current batch of World Touring Car drivers having driven its layout before.

As such, the friday practice sessions would be more crucial than ever for teams to find the right car set-up in a largely alien environment. So, when Yvan Muller‘s Hyundai suffered a power steering failure very early on into the first session, the Frenchman must have been kicking himself. Losing a significant chunk of track time meant that Muller would then be on the back foot in terms of car set-up, as his fellow championship competitors racked up the miles.

But while Muller was struggling, his YMR team-mate Thed Bjork was on fire. The Swede seemed to be at one with his car and topped the time sheets in both practice sessions. Norbert Michelisz and Gabriele Tarquini also showed strong form in their Hyundais, while the Comtoyou Racing Audi squad seemed to have found a surge in pace.

As the time arrived for qualifying to begin, the form books suggested that the Hyundai drivers would probably dominate. However, in the early stages, it was the Honda of Esteban Guerrieri who was the initial pace-setter. With less than ten minutes gone however, Gabriele Tarquini restored the South Korean marque’s place at the top of the standings, before team-mate Michelisz went even quicker still.

Then, unexpectedly, Frederic Vervisch posted a blinding lap time in his Audi to rain on the Hyundai parade at the top of the table. But, the Belgian’s efforts were sadly in vain. Having left it until late on in the session, Thed Bjork went even faster than he had done in practice, and edged into the top spot.

Not long afterwards, Kevin Ceccon and Yann Ehrlacher had significantly quick lap times thwarted by the introduction of red flags, halting the session with only thirty five seconds left on the clock. The reason for the stoppage was soon revealed to be the fact that Mat’o Homola had binned his Peugeot into one of the sector three gravel traps in an unsafe area.

So, Thed Bjork would be the driver starting the opening race at Ningbo Circuit from pole position, with Vervisch alongside him in the Audi. Michelisz and Tarquini locked out row two, just ahead of Guerrieri and Vervisch’s team-mate Nathanael Berthon. Youngsters Zsolt Szabo and Denis Dupont thoroughly impressed in seventh and eighth place respectively, while Volkswagen team-mates Rob Huff and Mehdi Bennani completed the top ten.

Elsewhere, championship contender Yann Ehrlacher could only manage twelfth place, one position ahead of uncle and championship rival, Yvan Muller. The WRT Audi team struggled unexpectedly, with Jean-Karl Vernay languishing down in fifteenth. Team-mate Gordon Shedden was supposed to have benefited from a new chassis this time out, but could only salvage a lowly 21st place grid slot.

The team most in strife, however, was DG Sport Competition. Both of the Peugeots were inexplicably off the pace by over two seconds – a huge time gap by touring car standards.