Smooth Day in Singapore for Räikkönen sees him End on Top 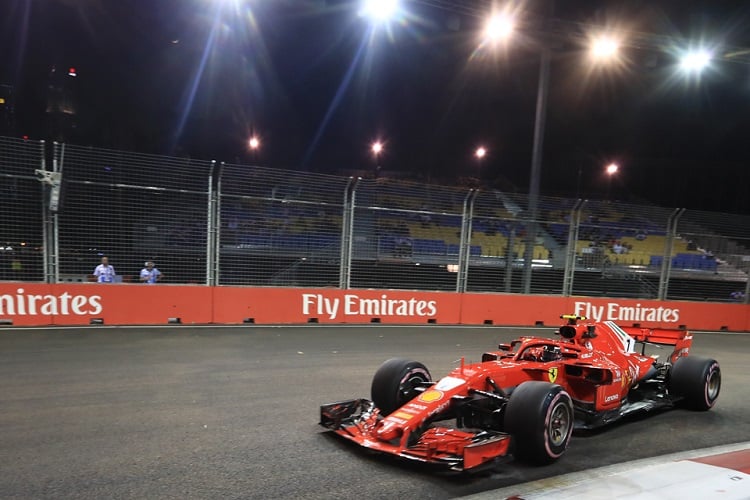 Kimi Räikkönen set the fastest time of the day during free practice for the Singapore Grand Prix, his first race since the announcement that he would be leaving Scuderia Ferrari at the end of the season.

The Finn, who will switch from Ferrari to the Alfa Romeo Sauber F1 Team for 2019, was fourth fastest in the daytime session but when the lights came on he took top spot with a best lap of 1:38.699, 0.011 seconds faster than current championship leader Lewis Hamilton.

Räikkönen felt the day went pretty smoothly throughout and believes the Hypersoft Pirelli tyre, being used for only the third time this weekend, will be good for short runs, although the Ultrasoft and Soft would be preferable when on the longer runs.

“Today everything felt OK and things ran pretty smoothly,” said Räikkönen.  “In the first session we checked many things and made some changes; in the second one everything seemed to work .

“It was a normal Friday, but obviously this track is different to many others and the second session is held in different conditions from the first one. The tyres behaved pretty much as we expected.

“The Hypersoft is the one that provides the best grip for sure, so it is very useful here, at least for the short runs. Obviously they are not going to last as long as the other compounds, but we are aware of that.”

Räikkönen ran with two different floors during practice but found no noticeable difference between the two, although they will likely keep going with the new one as he feels Ferrari would not have brought it to the Marina Bay Street Circuit if they did not think it would improve the SF71H.

“I tried two different floors; there’s not a night and day difference between them, but we wouldn’t use something if we didn’t think it is better,” said the Finn.  “Now we‘ll keep on doing our job and see what it brings tomorrow.

“For sure it will be close”.

By Paul Hensby
2 Mins read
Lewis Hamilton was fastest in the opening free practice session for the Bahrain Grand Prix ahead of team-mate Valtteri Bottas.
Formula 1