Sato dominates from pole to win at Barber 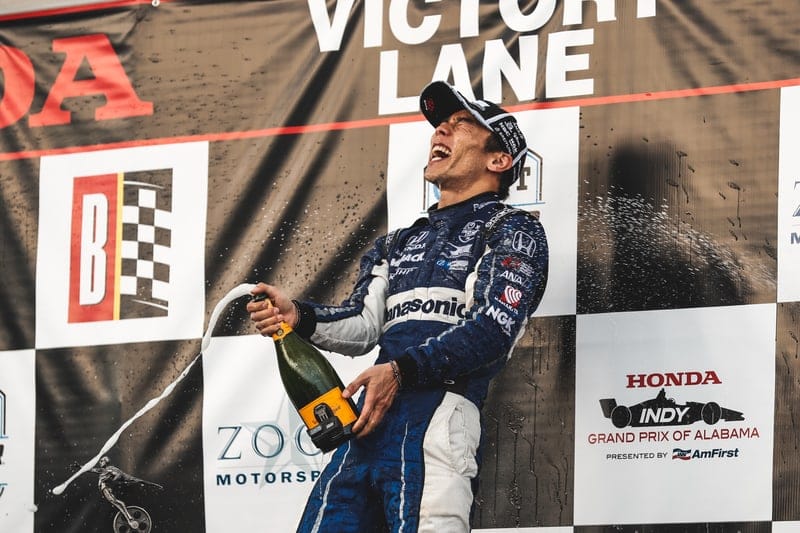 After a front row lock-out in qualifying on Saturday, Sato got off to a great start when the green flag flew, with team-mate Graham Rahal holding off Scott Dixon to remain in second place after the first few corners.

The first half of the race was reminiscent of a game of chess, with teams juggling potential strategies. The main choice was between a two-stop and a three-stop strategy. Due to the ageing racing surface at Barber Motorsports Park, which is expected to undergo a repave later this year, tyre degradation was high. This pushed most of the field onto a three-stop strategy fairly early on, with only Sebastien Bourdais, Spencer Pigot and Jack Harvey ultimately seeing the two-stop strategy through to conclusion.

During the first pit-stops, Rahal Letterman Lanigan Racing had a bit of a tough time. Sato had a slow stop after his left-rear tyre proved difficult to change. He ended up just holding onto his race-lead by a matter of tenths. His team-mate, Rahal, had a worse time though. Graham underwent a twenty-four second stop whilst the team tried to fix a throttle sensor issue; dropping him out of contention for the race win and right into the melee of the midfield.

After his scare during the pit-stops, Sato would soon check out in the lead of the race once again. The only laps he would fail to lead would come during pit-stop cycles.

However, a potential spanner was thrown into the works for Sato with thirty laps to go. His team-mate, Rahal, would stop his #15 Honda out on the race-track after the car suddenly shut-off. Moments later, whilst many drivers jumped into the pits in anticipation of a caution, Max Chilton would crash his #59 Carlin at the pit-entry whilst trying to avoid Tony Kanaan, who was pitting at the same time.

The incidents for Chilton and Rahal would bring out the caution, but series officials allowed the ensuing pit-stops to be carried out before deploying the safety car; thus avoiding drivers being caught out like they had been at COTA two weeks ago.

Every driver would make their final pit-stop at the same time, with Sato leading the field back to green ahead of Dixon and Bourdais; with Sebastien utilizing his two-stop strategy perfectly to jump into contention for the final run to the flag.

Despite having to deal with the caution and the ensuing race restart, Sato would soon re-build his advantage in the lead of the race. The #30 Honda driver looked nigh on unstoppable all-race long. A brief scare came in the last five laps, when Sato ran wide at the entry of the turn seven chicane, breaking off a piece of his rear diffuser in the process.

In the end, however, even his off-track moment would not stop him. Takuma would cross the line at the end of lap ninety to take the victory from pole position, with almost seventy laps led in the process. The win is Sato’s fourth in the NTT IndyCar Series, adding to his previous victories at Long Beach, Indianapolis and Portland.

In the closing laps of the race, Scott Dixon was forced to turn his attention away from the race-leader Sato so that he could defend second place from the challenging Bourdais. In the end, Dixon would come home under half a second ahead of Bourdais. The result means that Dixon has now finished on the podium eight times in the ten IndyCar races held at Barber, but he will have to wait another year to try and score the elusive Alabama victory.

Bourdais and Dale Coyne Racing‘s fantastic two-stop strategy took them to an eventual finish of third place; capping off a weekend where the team showcased a potential return to form.

Fourth place would go the way of Team Penske‘s Josef Newgarden. After qualifying way down in sixteenth place, Josef’s race turned around when the caution came out with thirty laps to go. After the pit-stops, Newgarden would restart the race in ninth place and would use the faster alternate tyre compound to scythe his way through to fourth place; pulling off some fantastic overtakes in the process. The result means that Josef would hold onto the championship lead heading into next weekend’s race at Long Beach.

Andretti Autosport‘s Alexander Rossi completed the top five; a decent result for the Californian who has said many times that Barber Motorsports Park is one of his least favourite tracks on the calendar. Sixth place would go to James Hinchcliffe, with his team-mate, Marcus Ericsson, coming home just behind him in seventh place after an astonishing performance.

Like in COTA, Ericsson put in a fantastic drive to come from the back of the grid into the top ten, but this time he was able to finish inside the top ten as well. What’s more, Marcus went wheel-to-wheel with some of the veterans of the series, pulling off some daring overtakes on the likes of Newgarden, Will Power and many more in the process.

Ryan Hunter-Reay and Simon Pagenaud took eighth and ninth respectively at the drop of the chequered flag, with rookie Felix Rosenqvist coming home to round out the top ten. Rosenqvist put a move on Penske’s Will Power in the closing moments of the race.

It was a terrible race for Power, who struggled throughout with prevalent tyre issues. In hindsight, eleventh was an impressive result bearing in mind that the Australian spun mid-race and ended the event with mere drops of fuel left in the tank of his #12 Chevrolet. He will be hoping to bounce back from the disappointment of the last two races to finish well at Long Beach next week.

Zach Veach came home in twelfth place, a decent finish baring in mind the difficult weekend he had endured beforehand after multiple incidents throughout practice and qualifying. Thirteenth would go the way of Meyer Shank Racing‘s Jack Harvey, who was hampered mid-race after earning himself a drive-through penalty for speeding in the pits. Nevertheless, Harvey and MSR once again showed decent pace.

Further back, rookies Santino Ferrucci and Patricio O’Ward would come home in fifteenth and sixteenth respectively after combative drives. Both put in decent moves throughout the race but were unable to translate their impressive overtakes into a decent race finish.

Another driver who would have been hoping for better in Barber was Ed Carpenter Racing‘s Spencer Pigot. After starting a career-best equalling sixth place, Pigot was one of the three drivers on a two-stop strategy. Sadly, he was given a penalty for an unsafe pit-release that would drop him to an eventual finish of seventeenth.

It was an equally disappointing race for Pigot’s team-mate, Ed Jones. The #20 ECR Scuderia Corsa driver raised eyebrows when he jumped the start and moved from his qualifying position of twenty-first all the way up to fourth place at turn one. Soon after, the Dubai-born British driver would be given a penalty for the start infraction. He would ultimately finish down in nineteenth place.

The drivers leaving Alabama the most disappointed, however, will be the two race retirees. After showcasing great speed in qualifying and early on in the race, Graham Rahal will be desperately unhappy to have failed to finish. The exact cause of his #15 Honda’s failure is unknown as of yet, but the likelihood is that the car stopped as a result of the recurrent throttle sensor issue.

The second and final retirement of the race was Harding Steinbrenner Racing‘s, Colton Herta. After the high of becoming the youngest ever IndyCar race winner back at the Circuit of the Americas, Herta was disappointed after an engine issue cost him a spot in the pole position shoot-out in qualifying on Saturday. In the race, the issue looked to be continuing.

The #88 Honda was noticeably down on top speed compared to his rivals, with Herta falling through the order before retiring later on with a fuel pick-up issue. He will want to be back in contention for the race win in just a week’s time in California.

With three races of the 2019 NTT IndyCar Series in the books, Penske’s Josef Newgarden continues to lead the championship, with twenty-seven points separating him from Ganassi’s Scott Dixon. The championship will continue in a week’s time, with the 2019 Grand Prix of Long Beach taking place on Sunday, April 14. 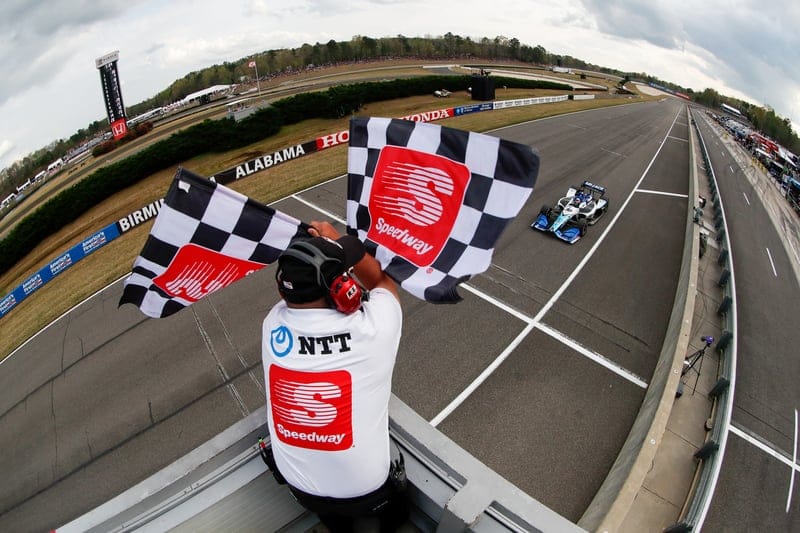