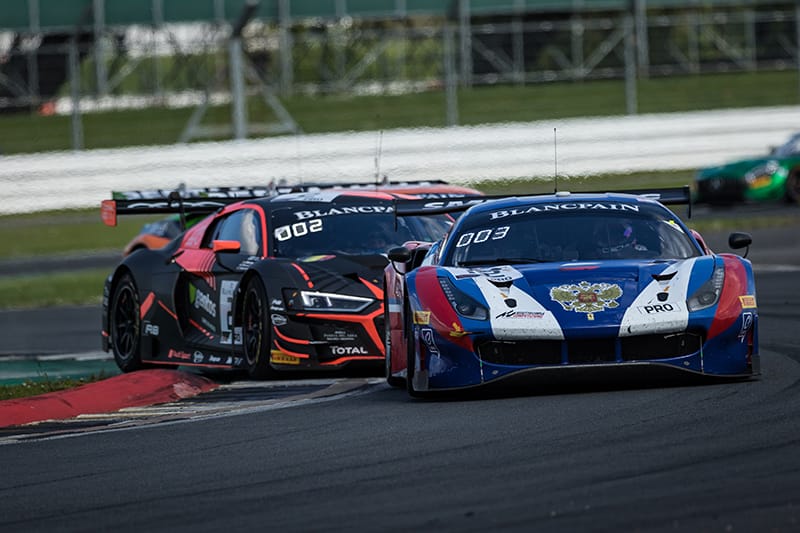 SMP Racing stole the win from the Lamborghini horde at round 2 of the Blancpain GT Endurance Cup at Silverstone.

Miguel Molina, Mikhail Aleshin and Davide Rigon sliced through the field after starting tenth on the grid. The Silverstone race was drama filled from the drop of the flag at 3 pm.

All 48 cars of the field made it through Copse and kept calm, but as the pack exited Becketts, the midfield began to lose their cool. Nyls Stevenart in the #26 Sainteloc Audi made contact with another car and had a puncture heading through Chapel, sending the pack into a frenzy of avoiding manoeuvres.

The cars were scattered heading down the Hangar Straight, but unfortunately, the #488 Ferrari of Rinaldi Racing, #59 Garage 59 Aston Martin and the #88 Akka ASP Mercedes were all caught up in the accident, taking them completely out of the race before they’d even got through the first sector.

The pack would run behind the safety car for 20 minutes whilst the cars were cleared up and the marshals got to work on cleaning the circuit of the debris from the multi-car accident.

In their centenary year, Bentley was looking strong and had the pace from both the #107 and #108 cars. Bentley never has had the best of luck when it comes to racing and once again trouble struck the #108 Bentley with Alex Buncombe on board. Buncombe came into contact with the #17 Belgian Audi Club car, causing a puncture on the Bentley, dropping them to the very back of the pack.

Back at the front, the Lamborghini trio of the #63 Grasser Racing Team car, the #519 and #563 from Orange1 FFF Racing Team car were just driving away from the field, the new Evo version of the Huracan was suiting the circuit as all three looked stable through all lines of the circuit.

50 minutes in and the pole position car and leader from the start hit trouble. Coming onto the pit straight #63 GRT Lamborghini had a puncture and was forced to limp a whole lap with the rear tyre carcass flailing around. 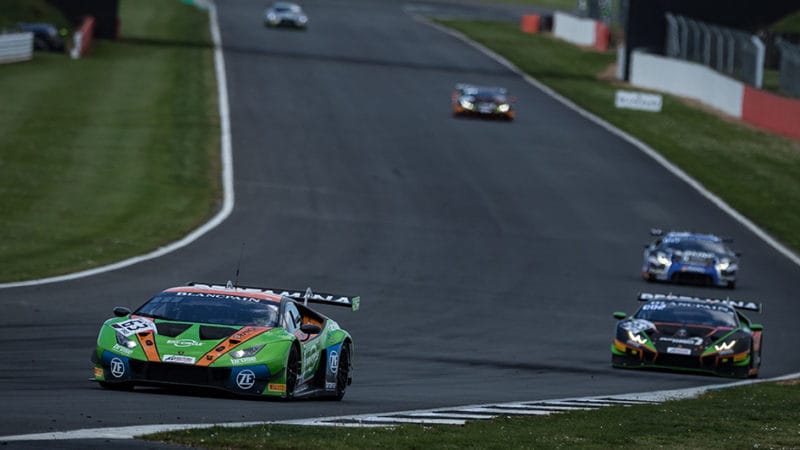 One hour down and the pit stops were cycling through smoothly; The #444 HB Racing Ferrari went off into the gravel at Luffield in the hands of Jens Liebhauser, forcing a full course yellow to be called by the race director. The race would go green again after car was cleared, leaving 1 hour 44 minutes to go.

Just past the halfway mark and there was huge accident on the exit of the pit lane just past Copse. Taylor Proto  in the #555 Orange1 FFF Racing Team Lamborghini was exiting the pitlane as he came into contact with the #97 Oman Racing with TF Sport Aston Martin. The #555 Lamborghini speared off to drivers right into the barrier where the concrete wall starts with no tyre defence. This impact destroyed the cars front end but luckily Taylor Proto walked away with no injury at all.

The safety car was scrambled once again to collect up the field and control the field whilst the marshals cleared up the accident. Whilst behind the safety car the #33 Rinaldi Racing Ferrari ground to a halt just rounding Becketts corner, extending the safety car period further to once again deal with another stricken car on circuit. Racing would begin with 70 minutes still left on the clock.

With the incidents that occurred in the second hour, the race began to feel extremely fragmented, the driver stints became practically redundant due to the amount of time behind a safety car or under a full course yellow.

The third hour saw the cars stopping for their final driver changes. The #519 car now had Giovanni Venturini who was leading Davide Rigon in his #72 SMP Racing Ferrari. Strakka Racing was holding a strong third in their #43 Mercedes AMG whilst Dries Vanthoor was wrestling the #2 Belgian Club Audi Team WRT car around the circuit, catching Jack Hawksworth in the #43 Strakka Mercedes. The #563 Orange 1 FFF Racing Team was delayed with a pitstop error, but was fighting back through the field, managing to pass Vanthoor before moving onto hunting down Hawksworth in his AMG Mercedes.

45 minutes remaining and Venturini was doing a sterling job at holding off the much faster Rigon, but coming out Brooklands Rigon got a better drive out of the corner, taking a dive up the inside of Venturini heading into Luffield, taking the lead of the race with just under 15 minutes left. Davide Rigon would settle in and pull away from Venturini whilst Hawksworth was coming under increasing pressure from Marco Mapelli in the #563 Lamborghini.

Mapelli took an adventurous and rather ambitious manoeuvre coming through Club and Vale with a a late dive resulting in a spin for the #43 Strakka Racing Mercedes and damaging the rear suspension of his own #563.

Mapelli would struggle to hold onto the car for the remainder of the race, whilst Hawksworth dropped down to sixth place after the spin, managing to recover back to fifth on the next lap. All this action had left a stable Vanthoor come through the field and was now sitting pretty in third position.

Rigon pulled away at the front and came round Luffield for the final time on the seventy-sixth lap to claim the victory for SMP Racing in their Ferrari. Venturini held onto second place and brought it home for Orange 1 FFF Racing team, while Dries Vanthoor happily took the final step on the Podium for WRT Audi after starting the weekend absolutely nowhere on the pace.