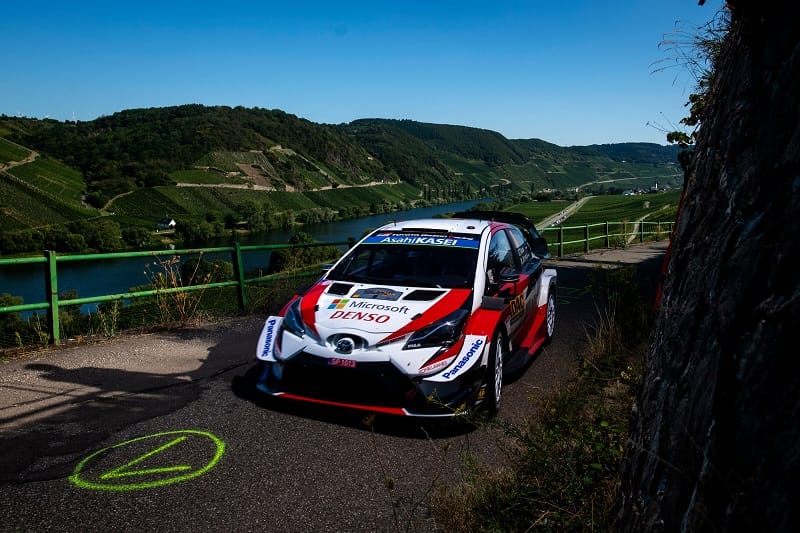 Ott Tänak has just a 2.8 seconds advantage over Thierry Neuville going into Saturday on Rally Germany after a tight battle throughout the first full day of action.

Championship leader Tänak had lost the lead to the Belgian Hyundai driver on the opening stage of the day, but he soon regained his overnight lead and despite Neuville’s best efforts, he remains in front on Friday evening.

Behind the leading duel is the third title contender, Sebastien Ogier, who admitted to struggling with the understeer on his Citroen C3 WRC. He also dropped time after visiting a field during Friday, costing him vital seconds.

The battle for fourth took a late twist on Friday evening after Dani Sordo, who had leapfrogged Kris Meeke into the position on stage six, lost over a minute on the final stage of the day after a gearbox problem dropped him all the way down to ninth.

With Meeke now fourth, he is ahead of Toyota teammate Jari-Matti Latvala by just 2.2 seconds despite the Finn struggling with the Yaris WRC’s brakes. Andreas Mikkelsen, another man to suffer with understeering issues on the German asphalt, rounds out the top six overall.

Esapkekka Lappi survived a spin to sit seventh with Gus Greensmith in eighth on his first appearance on asphalt in a WRC Ford Fiesta. M-Sport teammate Teemu Suninen suffered a disappointing technical problem on the very first stage on Friday and he was forced to retire from the remainder of the days action.

WRC2 PRO is being led by Kalle Rovanperä, with the young Finn ahead of Takamoto Katsuta who sits 11th on his WRC debut in a Yaris WRC. Jan Kopecký trails a total of 17.6 seconds behind his Skoda teammate with WRC2 leader Stéphane Lefebvre in 13th overall and 8.1 seconds ahead of Nicolas Ciamin who is second in class.

By Nick Turner
4 Mins read
Toyota Gazoo Racing World Rally Team are looking forward to what they hope will be another successful asphalt outing.
WRC2

Ostberg returns to WRC2 with upgraded C3 Rally2 in Croatia

By Nick Turner
1 Mins read
WRC and Wolf Lubricants have extended their partnership with a new multi-year deal.