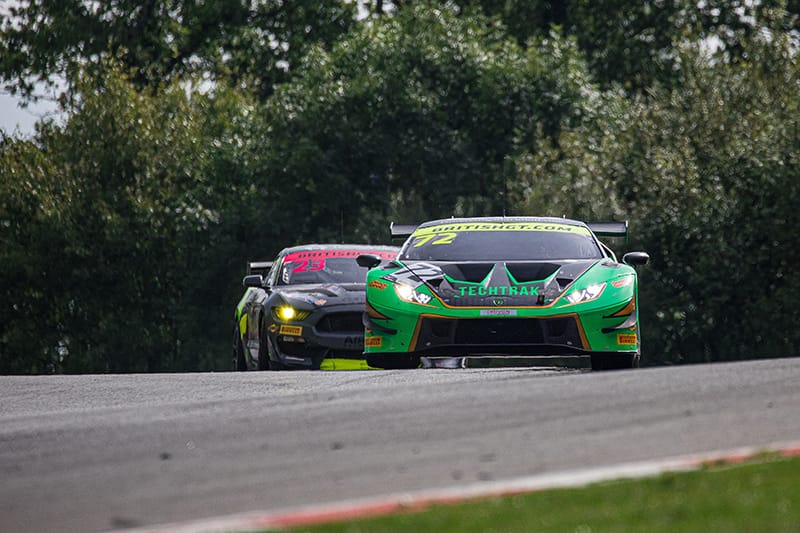 Barwell Motorsport, season long championship leaders and newly crowned winners of two classes at the Total 24H Spa, have continued their strong form, dominating the first practice session for the 2019 British GT Championship at Brands Hatch. Phil Keen struck hard and early to set the 1:25.377 which would stand throughout the session as the unassailable top time in the senior class.

In GT4 it was a similar story as Scott Malvern put in an early flyer to lock out the top spot in the Team Parker Racing Mercedes-AMG GT4 he shares with Nick Jones. The pace of the #66 Mercedes is even more impressive as the pair were hobbled by a binding rear brake through the session which affected the pace of the car.

The first session of the weekend for the GT3 and GT4 cars took place in near perfect conditions with 20 degree temperatures and light cloud as the teams got to grips with the Grand Prix layout of Brands Hatch. Despite the fact that the Grand Prix layout is rarely used, there wasn’t any real improvement in times across the session as the track cleaned up. It made for an uneventful but useful session.

Keen’s fastest lap early on showed that the pro was well in tune with the 2.432 mile circuit, so Barwell Motorsport gave much of the running in the 60 minute session to Adam Balon. The GT4 graduate will be vital if the #72 Lamborghini Huracan GT3 EVO is to keep its championship challenge alive to the Donington Park final round of the championship. Second in GT3 for the session was occupied by the RAM Racing Mercedes-AMG GT3, the time set by Callum Macleod, before allowing Ian Loggie to get in his track familiarisation laps.

Third place however was one of the few late improvements in the session. Tom Onslow-Cole, standing in for Adam Christodoulou who is on VLN duty for Mercedes-Benz, took much of the session to get back up to speed with the big AMG machine. It was in the dying minutes of the session, with less than a lap time on the clock, that Onslow-Cole monstered the #8 machine into third place, knocking championship leaders Sam de Haan and Jonny Cocker down to fourth place in the process.

Almost to a man, the teams sent out their pro drivers for the first look at the Brands Hatch circuit. The GT3 exception to the rule was Balfe Motorsport where Shaun Balfe had first crack of the whip, which left the car a little down the order in the first fifteen minutes. A prompt handover to Rob Bell soon corrected the timing screens though as he had the #22 McLaren 720S GT3 into fifth place soon after taking over. He knocked TF Sport‘s Nicki Thiim to sixth place with the lap, which later became seventh as the Team ABBA Racing machine improved care of Tom Onslow-Cole.

With the #66 firmly ensconced in control of GT4 the improvements, which were more common in the lower class than in GT3, could only trouble the other ‘podium’ spots. Really the order was set in the opening minutes of the session though as Tom Canning and Ash Hand headed the other cars for TF Sport in the #97 Aston Martin V8 Vantage GT4. A late improvement by Scott Maxwell put the GT4 championship leaders into third place, which until then had been held by Steller Motorsport care of a lap from Sennan Fielding.

After starting the season in a very strong fashion, the policy of rotating drivers through the #19 Mustang has not paid dividends for Multimatic Motorsports. Richard Meaden and Jack Roush Jr. share the car for this weekend and managed only 16th in the opening session of the meeting. There is no championship implications for the drivers of the #19 but being so far down the order makes it unlikely that the crew will be able to help their team mates Maxwell and Seb Priaulx who come to Brands with a statistical chance of clinching the title.

The only other real mover in the session was the Invictus Games Racing Jaguar F-Type SVR GT4, featuring Matthew George as normal and Major Steve McCulley, which made steady progress in the first half an hour or so of the session. A metered rise up the order saw the Jag end the session in 13th for GT4 but 4th in GT4 Pro/Am.

The second free practice session for the GT cars gets underway at 12:50 this afternoon, where the teams will have another 60 minutes to finalise their setups ahead of the qualifying session. You can follow all the action on TheCheckeredFlag.co.uk while qualifying and the race will be televised on BritishGT.com.