Nico Hülkenberg: “The car seemed in a reasonable place from the get go” 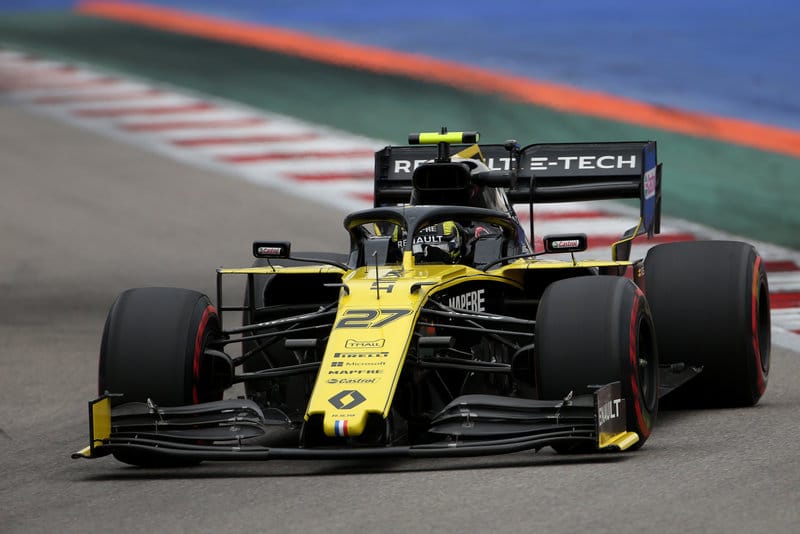 Nico Hülkenberg said it was not a bad opening day at the Sochi Autodrom for the Renault F1 Team, with the German ending inside the top eight in both free practice sessions.

Hülkenberg, who is currently out of a drive for 2020 following the recent announcement that Esteban Ocon will take his place at Renault next season, finished an encouraging seventh in the opening session, the best of the rest behind the leading three teams, and he followed that up by ending the afternoon in eighth, 1.864 seconds off the session leading time of Max Verstappen.

“Friday was okay for us today. I like the track, it’s got a nice flow to it and it was good to be back driving here,” said Hülkenberg.  “Generally, it wasn’t a bad day. The car seemed in a reasonable place from the get go and I felt confident in the car straight away.

“I wasn’t as happy in the afternoon, we changed a couple of things on set-up, which we’ll review and look to improve. But, overall, it wasn’t bad and I’m feeling positive.”

Team-mate Daniel Ricciardo ended the morning eighth fastest but blotted his copybook by spinning into the turn ten barriers as the session drew to a close, which meant he missed out on some track running in the afternoon as his mechanics fixed the rear of his car.

He was able to resume his running and ended fourteenth fastest, but the Australian has confidence that Renault can be competitive this weekend, particularly looking at Hülkenberg’s pace.

“It started pretty well today, but having the incident at the end of FP1 meant we lost a little bit of time in the afternoon,” said Ricciardo.  “The mechanics did a really good job to fix the car so quickly.

“We have work to do but we’re not in a bad place with just a few things to clean up. I think I can improve in some areas so there’s more to come. The rears have a hard time here and we’re figuring out the right balance.

“I’m not too concerned, Nico had decent pace and I think we’ll be alright tomorrow.”

Alan Permane, the Sporting Director at Renault, said the day pretty much went to plan, apart from Ricciardo’s spin into the barriers, but there is still some work to do on both cars in order to improve the balance for the rest of the weekend.

“It was a fairly standard Friday and, with the exception of Daniel’s little excursion this morning, everything ran to plan,” said Permane.  “We’ve got a bit of work to do on the balance – we were happy with the car in the morning and made a few changes; some worked and some didn’t.

“We have some work to do overnight to assess what we can do to improve it for tomorrow. Overall, we’re generally happy with things.”

By Nick Golding
2 Mins read
Haas Team Principal Guenther Steiner, is excited to have Haas’ team members families at the British Grand Prix this weekend for the first-time since the pandemic.
Formula 1

"Silverstone has some good and bad memories for me" - Mick Schumacher

By Nick Golding
2 Mins read
Both Mick Schumacher and Kevin Magnussen are glad to be back in Europe this weekend as the British Grand Prix kicks-off another double-header.