FEATURE: The Champion Formula 1 Has Staggeringly Missed Out On 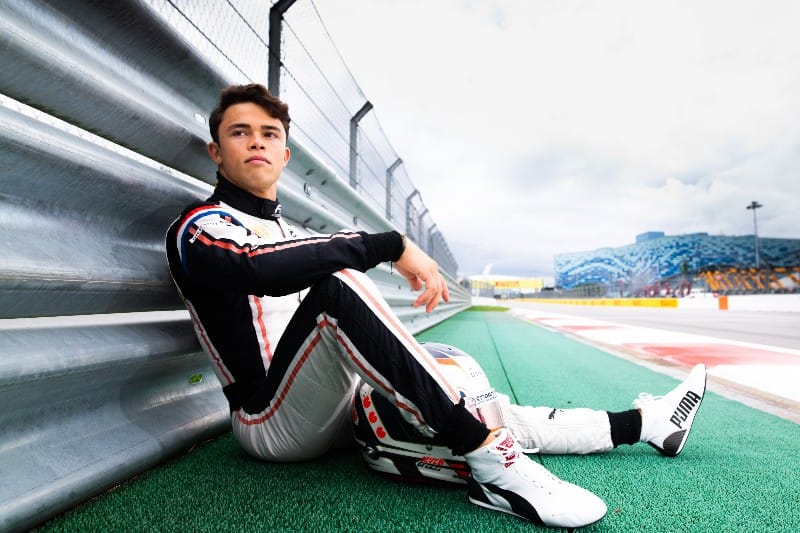 Formula 1 has often been the centre point for talented drivers to step up and race in the pinnacle of Motorsport. Often or not, some have accolades of championships under their belts from the junior categories. Success in a junior career often helps create an impressive image of the driver, which gives teams a reason to approach and sign them for upcoming seasons.

In recent years, the emergence of Charles Leclerc from 2016 in his GP3 Series days, to now with Scuderia Ferrari is an example of a driver who has continued his success everywhere he has gone. Ferrari backed the Monacqesue driver throughout his career, which in turn led to him racing for the Prancing horse in only his second season. George Russell is another who like Leclerc, won the GP3 Series the year after Leclerc did, leading to a seat in F1. Whilst Russell might be in a Williams Racing car is rarely fighting anyone during a race, he has impressed in his rookie season, with Mercedes-Benz pleased with his performances in a very challenging car.

These two have one thing in common: FIA Formula 2 Champion. The accolade both have achieved in their rookie seasons. Leclerc won in the first season when GP2 became Formula 2, winning the series comfortably over Artem Markelov with a round to spare in 2017. A year later, Russell in his rookie year with ART Grand Prix achieved the same as Leclerc, winning F2 in his rookie year in Abu Dhabi, with one race left. Russell had dominated the second half of the season against the likes of Lando Norris and Alexander Albon, which led to him becoming champion with ease going into the feature race as Yas Marina.

In year three of F2, it wasn’t a rookie driver who claimed the title. It was actually a driver who raced in both seasons when Leclerc and Russell won their respected titles, and in the process notch up wins of his own. That driver was Nyck de Vries.

de Vries wrapped up the title with a round to spare at Sochi, Russia by winning the feature race in calm fashion ahead of title rival Nicholas Latifi, who too had raced in both 2017 and 2018 seasons with Nyck. de Vries with ART ran the majority of the season in the lead and never looked back, showing a champions’ drive throughout the year towards the title. But unlike Leclerc and Russell, de Vries won’t be jumping into an F1 seat next year. He will head into a different direction in Formula E, joining Mercedes EQ Formula E Team as they make their debut season.

Formula 2 has often been a series that springboards drivers into F1, but this isn’t often guaranteed a seat in the top tier of Motorsport. Drivers who make the step up into F1, often have connections with teams through their academies. Leclerc had Ferrari, Russell had Mercedes. Meanwhile, Nyck had no way into F1. Since 2010, de Vries has been part of the McLaren junior program and supported his career as he made his way up the Motorsport ladder.

In 2018, de Vries faced competition with Norris in F2, with a potential seat at the McLaren F1 Team on the line. Whoever came out on top, would have a strong chance of obtaining the seat for 2019. That was the case at the beginning of the season, until September when McLaren announced Norris over de Vries anyway, with three months of the season left. At the time Norris was ahead in the drivers’ championship, but de Vries accumulated more wins over the Brit but suffered a run of retirements that hindered his championship chances. At seasons end, Norris ended the season second but with one win, whilst de Vries was 17 points behind in fourth, with three wins to his name. Russell, Norris, and Albon were promoted to F1, whilst de Vries was left behind. The Dutchman felt he had a better year than both Norris and Albon, citing that he should have been promoted to F1 as well.

After the 2018 season, de Vries ended his connection with McLaren and focused on winning it all next year in 2019, signing with ART – reuniting with his old GP3 team he raced in 2016, serving as team-mates to both Leclerc and Albon. de Vries had a simple motive that proved to be a phrase he would repeat throughout the season, even in an interview with The Checkered Flag. “We are here to win.” And win he did.

de Vries was consistent and quick throughout the season. Even when he wasn’t having a strong round, he would be able to collect points to keep his score streak going. At this point in Russia, he remains the only driver competing in a full-season to finish in the top ten in every race. He collected the title with a win in Sochi, rounding off a successful season. But unlike those before him, F1 isn’t his next destination.

Often or not, F1 teams would try and sign GP2/F2 champions or drivers at the top of the series as test or full-time drivers. This was the case for Leclerc, Russell, Norris, and Albon. But strangely enough, not for de Vries. The 2019 F2 grid might be weak compared to previous years, and top drivers in the standings having over two years worth of racing in F2 under their belt, but they still showcased their talents and what they can do.

Was it because F1 teams were turned off by the weak F2 grid? No. F1, whilst not looking likely to sign any of these drivers for 2020, still used them for test and practice sessions. Latifi took part in Free Practice sessions with Williams and is favourite to sign with the team in 2020 alongside Russell. Other than the Canadian, only Jack Aitken, Sérgio Sette Câmara, Callum Ilott and Mick Schumacher have taken part in in-season testing with F1 teams.

But even then, F1 teams are exploring F2 drivers in private tests. Renault with their strong academy has done multiple private tests with old F1 machinery. Drivers such as Guanyu Zhou, Max Fewtrall and the late Anthoine Hubert have been given tests behind a wheel of an F1 car to get some experience before making potential tests. However, testing opportunities will be very limited going forward, as F1 has ruled out in-season testing for the 2020 season and beyond to reduce cost.

de Vries has never tested a modern F1 car in recent years with McLaren, so we wouldn’t have an indication of what he would have been like behind a wheel of an F1 car. A champion never got the test or the attention deserved by other teams. Instead, he heads into a different direction in Motorsport with Mercedes and its new team in Formula E.

Whilst de Vries isn’t racing in F1 in 2020, it isn’t necessarily game over for de Vries and for F1. GP2 champions Pierre Gasly, Stoffel Vandoorne, and Jolyon Palmer all didn’t make their full F1 season debuts a year later. Whilst the likes of Gasly and Vandoorne did race in F1 the following year after the GP2 success, it wasn’t planned due to injuries to Fernando Alonso and the unexpected dropped for Daniil Kvyat. All three were assigned to test driver roles before they were given drives in F1. Out of the three, only Gasly remains in the sport as Palmer is now a regular commentator, whilst Vandoorne has moved to Formula E, coincidentally partnering alongside de Vries.

But even winning the support series title isn’t enough to earn a space in F1. Fabio Leimer and Davide Valsecchi won the series in 2012 and 2013 but were not handed an F1 seat ever. What might have put teams off was their experience in the series. Valsecchi competed in GP2 for five seasons, whilst Leimer did four years before his big break. But even then, it didn’t stop the likes of Palmer getting a seat in F1, having spent four years before he won the title in 2014. He didn’t last two seasons, being dropped by Renault before the end of the 2017 season.

It might raise alarm bells to F1 teams if a driver has spent a certain amount of seasons within GP2/F2. Why would they sign a driver that’s spent three or five years in a series and has only got to speed with the competition? After the short experiences of Palmer, Marcus Ericsson, Felipe Nasr, Lucas di Grassi and Pastor Maldonado in F1, who all have raced in GP2 for over three seasons, why would they? It’s probably why the likes of fan-favourite Artem Markelov will very unlikely never race in F1 ever. Because it took him too long for him to be relevant and get picked by an F1 team, even though his talent right now is exceptional.

But unlike Markelov, de Vries in F2 has won in every season he has competed in. He had the connection with an F1 team, and all his wins were convincing to be considered for F1. He has delivered pace, consistency and top results. Yet this isn’t enough for F1 teams to consider. But Latifi, who has 31 more starts and fewer wins than de Vries, has a shot of a drive in F1. He might carry more money than de Vries, but his 2019 season was his breakout year. de Vries meanwhile, has been winning since the start of F2 in 2017.

There weren’t many options for de Vries for a potential shot in F1. The only realistic shot was at Haas F1 Team, acting as a potential replacement for Kevin Magnussen or Romain Grosjean. Instead, the American team decided to stick with what they know and keep both drivers, rather than risking a change to their line-up. The only team that actually made an approach to de Vries was Mercedes, having Nyck do simulator work since this year’s Monaco Grand Prix, which played a role into the Dutchman landing a test with its Formula E team and eventually, signed on to be one of its drivers for Season 6.

Whether de Vries will get a future shot at F1 is an unknown. But his focus now turns to Formula E as the F2 and F1 paddock moves on into 2020. If successful in his debut season with Mercedes, teams may consider him. It would make him the first driver to go from Formula E to F1 since Gasly in the 2016-17 season when he did two races in New York as a replacement driver for Sebastien Buemi.

But the likelihood of this happening is rare, just like Toro Rosso Honda salvaging a last-minute to sign Albon, halting his Nissan e.Dams move before the start of Season 5. F1 might have missed out on a junior champion that could deliver results and help push a team up the field. Whilst they’ve made mistakes in signing drivers from the junior series that didn’t deliver. They’ve might have made a mistake on passing on de Vries. A champion, who will likely never got to deliver his shot in the big league of F1. But F1’s loss could be Formula E’s gain, and if de Vries can continue his abilities from F2, the all-electric series might have a superstar waiting.