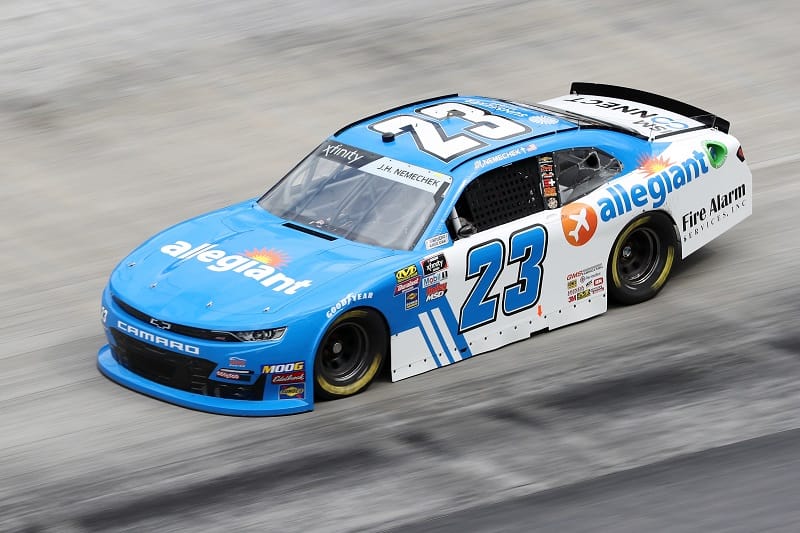 As GMS Racing expands their NASCAR Gander RV & Outdoors Truck Series team, they will contract their Xfinity Series stable. On Thursday, the team announced they would shutter the Xfinity programme after four years. GMS had fielded the #23 Chevrolet Camaro for John Hunter Nemechek in 2019.

“GMS Racing will not field a NASCAR Xfinity Series entry next season,” team president Mike Beam said. “We have decided that in the best interest of the organization we will put our complete focus on our Gander Trucks and ARCA Racing Series programs in 2020. We can’t thank John Hunter and everyone that has been involved in our Xfinity effort over the past four years enough for their hard work and dedication to the organization. We wish John Hunter the best in his future endeavors.”

Nemechek joined GMS’ Xfinity team for his first full season in NASCAR’s second tier. Despite not winning a race, he qualified for the playoffs before being eliminated after one round and finishing seventh in points. His 2020 plans are unknown, but he joined Front Row Motorsports for his Cup Series debut in early November, driving the #36 Ford Mustang in place of an ailing Matt Tifft. With Tifft departing FRM and the #38’s David Ragan retiring, the team has two slots available assuming the cars are retained.

“I’m thankful for the opportunity from Maury (Gallagher) and GMS. I hate to see the team shut down,” Nemechek stated. “As for me, I’m not sure what the future holds abut it’s in God’s hands now. I’m looking forward to what’s next for my career.”

In 2019, GMS fielded the #2 and #24 in the Truck Series for rookie Sheldon Creed and reigning series champion Brett Moffitt. Creed, a two-time Stadium Super Truck champion and the previous year’s ARCA title winner, finished his rookie season tenth in points, while Moffitt reached the Championship Round.

The duo will return in 2020, but the team will also run two more trucks for Tyler Ankrum – who made the 2019 playoffs with DGR-Crosley – and JR Motorsports‘ Zane Smith. NASCAR K&N Pro Series East champion Sam Mayer, who ran three Truck races for the team in 2019, will continue to do so in 2020 with the #21. World of Outlaws star David Gravel is also slated to contest a part-time schedule with the team.

By Justin Nguyen
2 Mins read
Despite starting at the back for a battery change, Justin Allgaier led 76 of 147 laps, including the final two in overtime to win at Darlington for the second straight year.
NASCAR Cup SeriesNASCAR Truck SeriesNASCAR Xfinity Series

By Justin Nguyen
4 Mins read
From William Byron honouring Jeff Gordon to Dean Thompson paying tribute to another Dean Thompson, NASCAR is turning back the clock with throwback weekend at Darlington for the eighth season.
NASCAR Xfinity Series