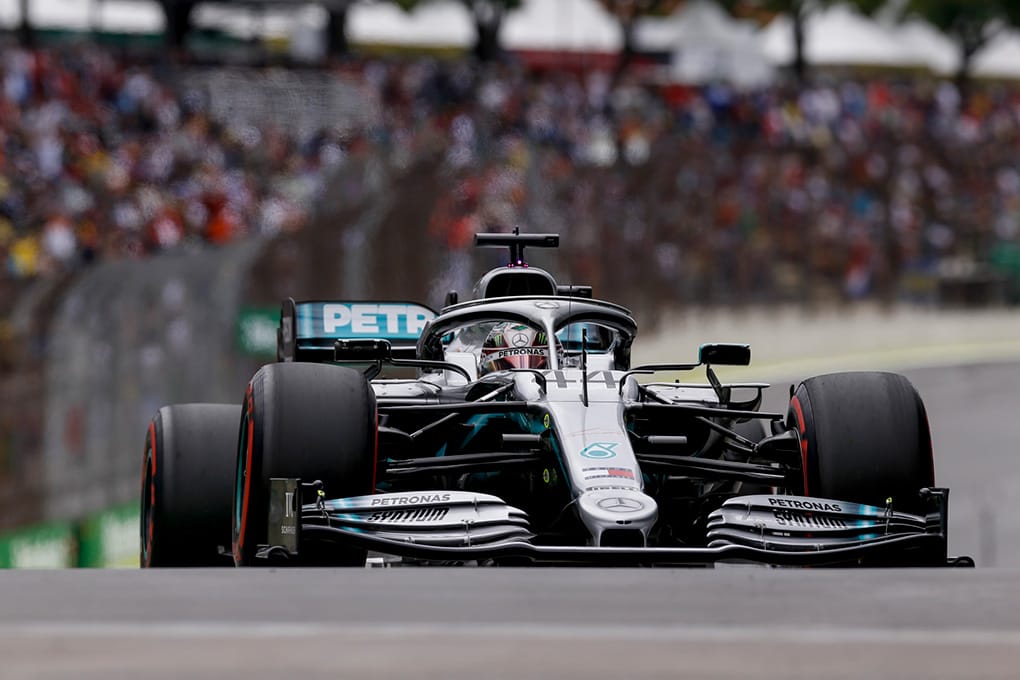 For the first time since 2013, a Mercedes AMG Motorsport car is not on pole position for the Brazilian Grand Prix as Aston Martin Red Bull Racing’s Max Verstappen put an end to the qualifying streak.

After topping the times in the final practice session ahead of qualifying, Lewis Hamilton looked to be on the way to securing the top spot in qualifying

“It was a challenging Qualifying session,” explained the Brit. “We went in knowing that it was going to be very tight, but in the end we didn’t have the pace to be on pole.

Free Practice 3 was really strong for us, but once we got to Qualifying both Ferrari and Red Bull had great pace and we were losing out on the straights by quite a chunk.

“I kept chipping away at it and I think the last lap was as good as it could get for us, I don’t think there was any juice left in the car. I’m happy I got myself into the top three, that makes it a much better challenge for me position-wise to fight for a win.

While Hamilton could only manage third place he is confident ahead of the race, hoping the pace over the 71 laps will help carry him to victory.

“Our long run pace looked strong on Friday, it’s been one of our strengths throughout the year. It’s going to be really hard for everyone tomorrow with track temperatures potentially reaching up to 50 degrees which we’ve not seen all weekend. I’ve been conscious of that with my set-up, so hopefully that works well in the race.

Teammate Valtteri Bottas will start from fourth place on the grid, making it a Mercedes second row after Ferrari’s Charles Leclerc took a ten-place grid penalty for having to fit a new engine in his car, promoting Bottas from fifth place.

“It was pretty close, as it always is here in Brazil, but something was missing today,” said Bottas. “I had a tricky Free Practice 3 and was quite a bit behind, but I was getting closer and closer in Qualifying.

While the pace improved, the Finn could do little to move up the times, “In Q3, it just felt like I couldn’t get much more out of the car. My laps in Q3 actually felt pretty good, there were maybe a few hundreds left to extract from the car, but not enough to challenge for pole today.

“I’ll still start the race from the second row, so it will be interesting to see what I can do from there. We have a good race car, but the Red Bull looked very strong in the long runs as well, so I’m sure it’s going to be an exciting race. Everything is still to play for, so we’ll keep upbeat and look forward to a good fight.“

Technical Director James Allison was disappointed not to be on the front row following the dominant performance of the team in previous years.

“This result is a bit deflating, those aren’t grid positions that we would be happy with.” said Allison. “It’s not completely out of line with what we saw yesterday, but we expected a little more after the decent results in Free Practice 3 this morning. But we didn’t reproduce that form in Qualifying.

“We’ve still got good enough grid positions that we’ve got a fighting chance of a good race tomorrow, where the track conditions will change a lot again. It’s going to be warm and this is not an easy track for the tyres, so we can expect an interesting race with people looking after those tyres, trying to make a decision between one and two stops.

“We were just shading the others on race pace in the long runs on Friday, but that was on a pretty cool track with a pretty manky overhead, so it is not a great indicator of what’s going to happen tomorrow.

Balance Issues for Hamilton on ‘Difficult Day’ for Mercedes at Silverstone

Stroll fastest in second practice after dramatic crash for Albon