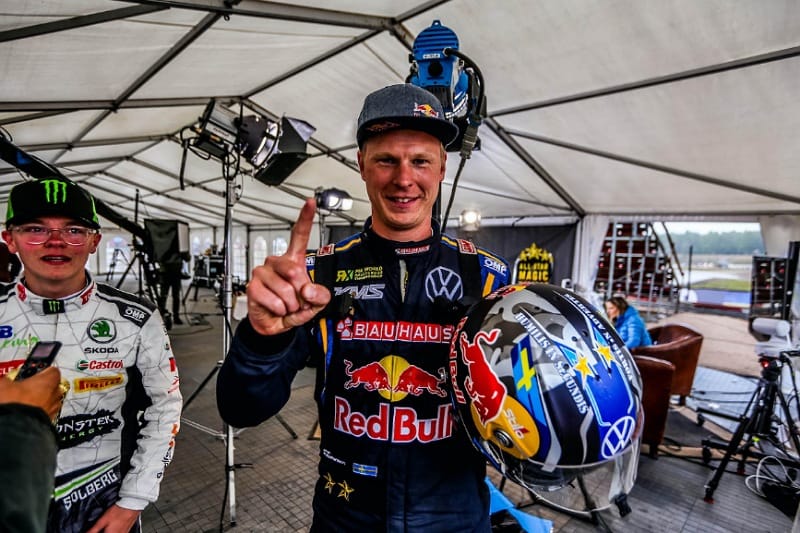 Johan Kristoffersson, often nicknamed The King of Rain’, proved why he is thought of as one of the best wet rallycross drivers in the world after taking the win at Höljes in the second round of the RallyX Nordic series.

Two-time FIA ​​World Rallycross champion Kristoffersson, who struggled in the opening round of the season earlier in the All Star ‘Magic Weekend’ went on to win the second round of the year ahead of weekend-long rival Robin Larrson.

“The rain smooths the strength relationships between the more developed World RX cars and our slightly older homebuilt.” Kristoffersson explained about the wet weather after taking the win.

“I actually thought it would be more slippery than it was. It was really hard, but you have to have a terribly great patience when it’s so wet. It feels very good to go from here with a second place and a victory, a perfect race weekend for us. I have had to make many difficult decisions out on the track this weekend and we have tried a lot with the settings.”

Kristoffersson is set to again compete at Höljes when the World Rallycross championship season begins at the Swedish circuit next month, although is expected to compete in a more developed Volkswagen Polo Supercar than the one he competed with last weekend.

Johan’s father and Team Principal of Kristoffersson Motorsport Tommy added on the weekend: “From start to finish it is very useful, from the preparation to the racing to the test of our team’s set-up here on site. On a dry track we did not really keep-up to the World RX cars, but when the rain came it became more driver related and Johan showed that he has not lost anything as a driver. A very good comeback for us in rallycross.”

By Nigel Chiu
1 Mins read
Magnus Dall is ready to make his debut in the RallyX Nordic next year as he looks to progress from two-wheel drive to four-wheel drive rallycross competition.
RallyX NordicRX2

By Pontus Lindroos
5 Mins read
Four champions were crowned on the final day of the 2020 RallyX Nordic season at Nysum in Denmark. Oliver Eriksson achieved his goal by taking the Supercar title and Henrik Krogstad claimed two trophies in Supercar Lites.