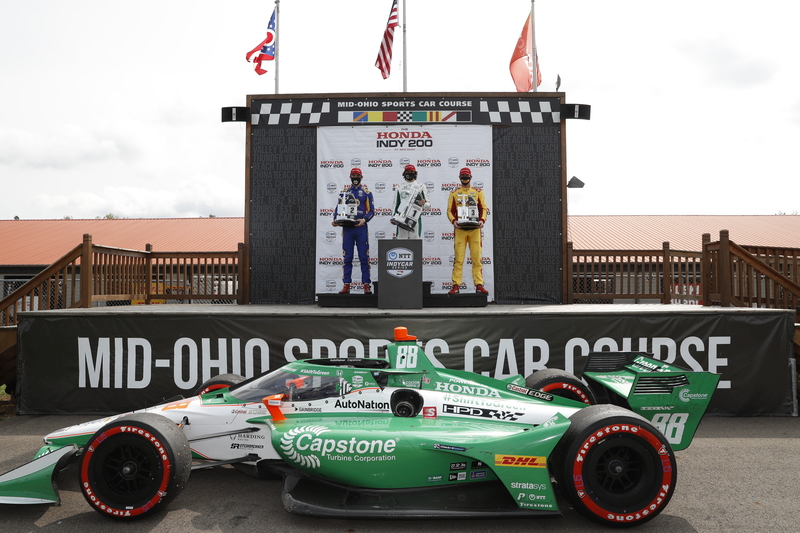 The excitement started early, as Santino Ferrucci got pushed into the grass in turn four on the start, rejoining the track dangerously right at the apex of turn five. Ferrucci would make contact with his Dale Coyne Racing teammate Alex Palou, who then collided with Felix Rosenqvist, bringing out the first caution of the day.

That would be the end of the day for Palou and Rosenqvist, and Ferrucci was handed a penalty for avoidable contact. After starting second, he would finish the day fourteenth.

Scott Dixon made a move to second before all the chaos unfolded, and would be the man to chase down Herta as the restart came on lap five. The five time champ couldn’t catch the youngster, who would have the gap over one second by lap 11.

Another caution would come out on lap 16, as A.J. Foyt Enterprises rookie Dalton Kellett would beach his car in the gravel trap in turn one. The caution was delayed, and almost the entire field came in to pit as soon as they saw Kellett was off track. With no immediate safety concerns for the driver or safety team, race control delayed the caution so as to not ruin races by closing pit road.

The field would remain relatively unchanged, as Herta maintained his lead from Dixon, Ryan Hunter-Reay, and Alexander Rossi. Only Takuma Sato and Marco Andretti would stay out. The aforementioned Andretti Autosport cars of Hunter-Reay and Rossi pit for the softer, red wall Firestone tyres as everyone around them went for the primary black tyres.

The restart came on lap 20, and immediately Hunter-Reay made a move on Dixon into turn four trying to pass for fourth place, but wouldn’t be able to do so as the two made slight contact. Rossi would slip by and then attack Dixon two laps later on his fresh reds to take provisional second place on lap 21.

The very next lap, Dixon made a rare mistake, spinning in turn one. The five time champ went a bit wide on the apex and hit the curbs that were still muddy from rain in the morning, sending him around. He would be able to keep it from stalling and continue, but fell all the way to twentieth. He would charge back late in the race securing tenth place on the last lap.

Herta’s fresh tyres were able to propel him past Andretti before he came in to pit, and on lap 29 Andretti would make his second off road excursion of the weekend, this time in turn one. He would finish the day in twentieth in a weekend to forget for the third generation driver.

Herta would finally reclaim his lead after Sato pit on lap 32. He would hold onto that lead until he pit on lap 46. Rossi would be the first to pit on lap 45 for primary blacks to go to the end of the race.

Herta would make his stop for fresh reds, a choice that all three Team Penske drivers would make in their final stops. Everyone else would agree with Rossi going to blacks to the end of the race.

Rossi would try to hunt down Herta as the laps ticked away, but would be unable to do so as Herta would go on to win. Rossi would hold his second place, and Hunter-Reay would finish third.

Graham Rahal would quietly have another top five finish coming home in fourth, and Marcus Ericsson would have a stellar drive up to fifth after starting fifteenth.

Pato O’Ward and Will Power, who both brought out red flags in qualifying, forcing them to start from twenty-first and seventeenth respectively. Both would make incredible runs into the top ten, with Power finishing seventh and O’Ward ninth. Power’s Penske teammate Simon Pagenaud would finish right where he started in sixth.

Josef Newgarden was able to make another small chip into Dixon’s points lead after finishing eighth, bringing the gap down to 72 points.

Newgarden’s only got three more chances to catch Dixon, the next being the IndyCar Harvest GP at the Indianapolis Motor Speedway road course for a doubleheader on 02-03 October.

By Griffin Schmoyer
5 Mins read
Mixed conditions meant chaos in the GMR Grand Prix, but also provided some rookies with career-best finishes. Let’s see how it all went down in this week’s Rookie Report.
IndyCar

By Griffin Schmoyer
2 Mins read
Scott Dixon and Takuma Sato lead the way on the first day of practice,leading up to the 106th running of the Indianapolis 500.
IndyCar

By Griffin Schmoyer
6 Mins read
Colton Herta navigated the chaos on-track and with the weather en route to his first win at the GMR Grand Prix, the first full-wet IndyCar race since 2019.