“We were keen on having a point” – Mick Schumacher 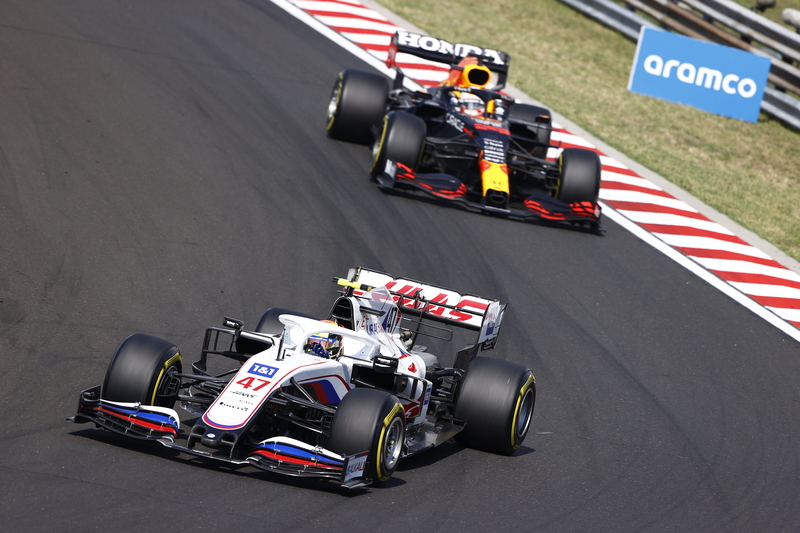 Mick Schumacher survived a chaotic Hungarian Grand Prix to cross the line in thirteenth place, ahead of Antonio Giovinazzi. Team-mate Nikita Mazepin was forced into retirement after being hit by Kimi Räikkönen.

Mick Schumacher continued his run of finishing every single race this season, after making his way through the carnage early on whilst others retired. As the red flag was flown at the end of the first lap to clean up the first corner damage, Schumacher found himself in tenth place.

The German drove superbly all race in tricky conditions and even battled with a wounded Max Verstappen. In the end the rookie didn’t have the pace for a points finish but does go into the summer break on the back of a positive race at the Hungaroring.

“Finishing in front of an Alfa is something that we weren’t anticipating and starting from last and finishing P13 is quite a decent result for us. We were keen on having a point but frankly we don’t have the car at the moment to do so but nonetheless this was great experience as I’ve been able to battle with the top guys and the championship leader.

“For me personally, from a growth point of view, it was very good. We always knew it was going to be tough but today was a very nice day and after having a disappointing day yesterday, we came back on a high. Ending this first half of the season on a high is very positive for everybody – the team and myself – and being able to battle with the top guys brought me so much experience and knowing that I can throw out my elbows, I’m glad I got that opportunity.”

Nikita Mazepin was extremely unlucky, the Russian could do nothing about the collision with Räikkönen, who was unsafely released from the pit-lane and went straight into the back of the Uralkali Haas F1 Team driver.

After surviving the opening lap Mazepin believed there was a real opportunity for a points finish, he will do his best to recharge his batteries over the summer break to come back refreshed.

“That’s one race I really wanted to be in. Not only for me, but this race offers lots of opportunities and my team really needs those opportunities. I saw the carnage in T1 and thought this is our day, and then I drove over debris and the team informed me I had a left-front puncture, I boxed and lost my track position and then boxed again and you saw what happened.

“That’s seriously not the way I wanted to go into the summer break because you want to give it your all and at least leave this weekend tired, with a sore body and sore neck. It’s a lack of laps and a lack of result, it’s very annoying. I’m sure this is just one of those day that is just rewarded later on.”