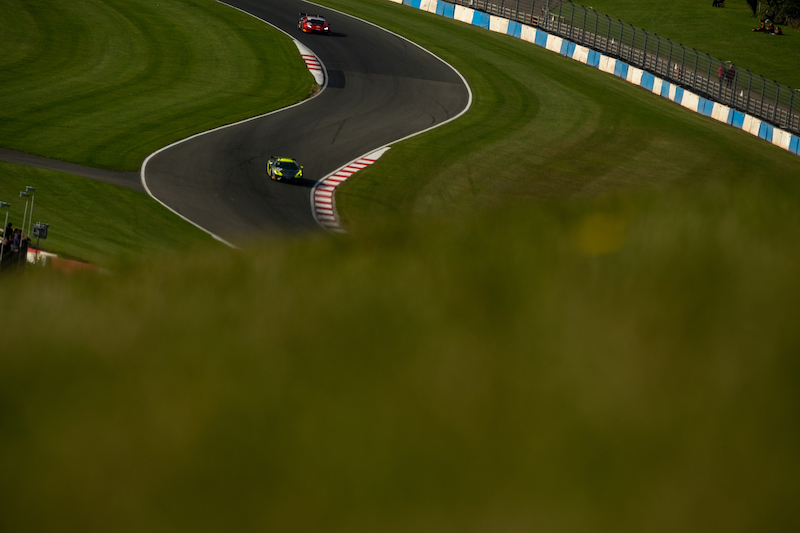 The Lamborghini Huracan GT3 EVO of Michael Igoe and Phil Keen has claimed the final pole position of the 2021 Intelligent Money British GT Championship season. The WPI Motorsport crew put in a combined 2:53.808 in two laps of the Donington Park Grand Prix circuit to take the top spot by over 0.350 seconds over their nearest rivals. The qualifying session went perfectly for the pair who start tomorrow’s race in a potential championship winning position.

In GT4 most of the titles have already been decided but that didn’t stop a hotly contested battle for the front row of the grid. The winners in this fight? Steller Motorsport and the Audi R8 LMS GT4 of Richard Williams and Sennan Fielding whose 3:09.568 puts them almost 6 tenths clear of second place. It puts them five places ahead of the first of the championship protagonists and three places clear of the Century Motorsport BMW M4 GT4 which tied up the titles Steller were contesting at the last meeting at Oulton Park.

WPI Motorsport are doing everything right to break Phill Keen’s curse at the final round of the championship. 2021 is the sixth consecutive year that Keen has entered the final round with a shot at the title and at least this year, he starts in a winning position.

Assuming championship leaders Leo Machitski and Dennis Lind only make up a single place in the race, the title could go to the perennial bridesmaid. Second and third places are filled by cars that are out of the title fight and given that the #6 machine, which is only two points ahead of the WPI Lamborghini, starts in 4th place things are looking hopeful for the #18.

On the downside, both the championship contenders ahead of the leader took podium spots in the second race at Oulton Park they come to the final round with success seconds to serve in the pit lane. Igoe and Keen must stay stationary for 20 seconds longer than the #63 from Barwell whilst Ian Loggie and Yelmer Buurman stay put for five additional seconds over the leaders.

Second went to the Enduro Motorsport crew who impressed during the free practice sessions. Morgan Tillbrook and Marcus Clutton opened eyes on the series second visit to Donington Park and if a second season is possible they could very well challenge for titles next year. Third was a career best starting position for the Team ABBA Racing Mercedes-AMG GT3 of Richard Neary and son Sam Neary. The pair have had great success in GT Cup but have never started a British GT race in a podium position.

Fourth is RAM Racing‘s Championship protagonists, Loggie and Buurman who start ahead of the Adam Balon and Sandy Mitchell driven Barwell machine. Theoretically the defending champion machine would let their team mates, who start sixth, through. However the #1 car carries a defending champion, not an outgoing one and with a sniff of a back to back title in the offing, it’s unlikely that Mitchell, or potential first time champ Balon, will let their team mates get it easy.

And after a qualifying session to forget, the #63 could be in desperate need of an ally. Leo Machitski struggled in the first GT3 session, losing a couple of lap times to track limits before beaching the Lamborghini at the Fogherty Esses. Only a late fast lap saved the potential champions from the indignity of starting at the back of the grid.

The final overall and GT3 Pro/Am title contender is the #7 Beechdean AMR Aston Martin V8 Vantage GT3 of Andrew Howard, with team mate Jonny Adam already out of the title fight. Already a long shot for championship glory, the odds became much longer as Howard and Adam could manage only 9th place on the grid for tomorrow.

Between the #63 and the #7 lies the #66 Team Parker Racing Porsche 911 GT3 R of Nick Jones and Scott Malvern. Jones impressed in the opening session but dropped down the order as the session progressed. With unsettled weather projected for race day, the rear engine Porsche could still come into its own. Team Rocket RJN took 8th place with Mia Flewitt and Euan Hankey enjoying the third of their visits to the championship this season in the GT3 McLaren. The pair might sit ninth, but are invisible for points which makes at least one less car that Andrew Howard will need to pass if he is to keep his title hopes alive.

Last on the grid will start the new Tolman Motorsport Bentley whose trials continued in qualifying. The Bentley looked very sick in places and spent much of the two 10 minute sessions limping around the Donington Park circuit. Ian Stinton and Jordan Witt, both returning to the series after an absence, managed to be within 6 seconds of the pole, and a merciful 10 seconds clear of the GT4 pole sitter.

Jamie Caroline continued his streak of putting in the fastest time in his go at the wheel. Having topped the two free practice sessions earlier in the day the Toyota Gazoo Racing UK man also set the new qualifying lap record for GT4 at Donington Park. A 1:34.671.

Unfortunately the grid is set on combined times and though team mate John Fergusson impressed in his qualifying outing, an Am against a number of Silvers made it unlikely the Toyota GR Supra GT4 could take the pole.

And as it proved, unlikely was right. Steller Motorsport proved the consistent and speedy pair with Richard Williams and Sennan Fielding lapping within 2 tenths of a second of each other aboard their Audi. They outpaced the Team Rocket RJN front runner of Michael Benyahia and Alain Valente who put the #3 McLaren 570S GT4 on the outside of the front row.

It could have been better but Benyahia’s best attempt was disallowed for track limits.

Third was the Academy Motorsport Ford Mustang GT4 of Will Moore and Matt Cowley. Almost a second off the combined pace of the pole duo, the team must be scratching their heads at a circuit where the Pony Car has always run well. They can take solace in the fact that the car which dominated free practice in GT4 starts in fifth place behind them. The Toyota underperforming in the first true competitive session of the final weekend.

Championship leaders in the GT4 Pro/Am battle, Newbridge Motorsport are another team who have to be looking at qualifying and wondering where it went wrong. They at least have the excuse of being post-repair job after an accident in FP2 left them rebuilding the front end of the GT4 Aston Martin and at least they outpaced the Century entered machine of David Holloway and Bradley Ellis which starts the race from ninth.

The guesting Aston will have the back bumper of the #9 machine. Team mates to the newly crowned GT4 Silver Cup and Overall champions, Chris Salkeld will be returning to GT4 next year while Andrew Gordon-Colebrooke is targeting a seat in the recently announced Century BMW M4 GT3. Their championship bid for 2021 was ended when the series reclassified them as a Silver Cup pairing, but honour is at stake in Donington Park.

Likewise 8th place starters Jordan Collard and James Kell are looking for a strong result to round out their troubled 2021 campaign. The top ten was rounded out by Balfe Motorsport with the #90 McLaren 570S GT4 of Ashley Marshall and Jack Brown. Both Ginettas, the third Team Rocket McLaren and the troubled Fox Motorsport McLaren of Nick Halstead and Jamie Stanley all start out of the top ten.

The final race of the season for the British GT Championship gets underway at 13:00 tomorrow with live coverage available on both the British GT website and on Sky Sports F1.