“We got everything we could out of this race” – Kimi Räikkönen 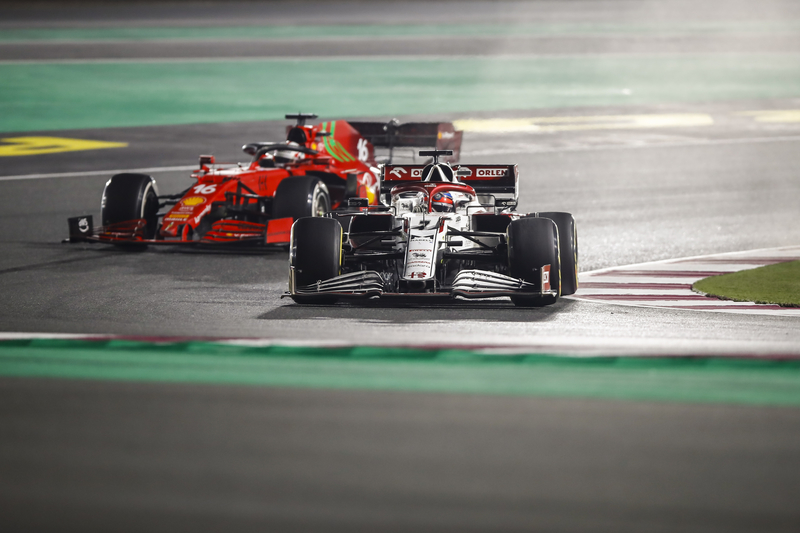 It was a solid weekend under the floodlights for Kimi Räikkönen at the Qatar Grand Prix, after finishing close behind the Scuderia AlphaTauri Honda team. The veteran finished fourteenth with team-mate Antonio Giovinazzi just behind in fifteenth.

It was a good race by Räikkönen at the Losail International Circuit, the veteran made an excellent start to the race and found himself in twelfth by the end of the first lap, four places higher than where he started. From then on Räikkönen who like his team-mate was on a two-stop strategy, spent the majority of the race preserving his tyres to avoid a potential puncture. Four drivers experienced front-left punctures during the race, something Räikkönen managed to avoid.

The Finnish driver produced an excellent overtake on Nicholas Latifi in the closing stages, going around the outside at Turn 1. By the end of the race Räikkönen was catching the AlphaTauri’s in front but with not enough laps to do anything about them.

The 2007 World Champion enjoyed the battles he was involved in and was surprised to be able to overtake at the circuit.

“I was surprised by the overtakes we could do, in the end it was an entertaining race. I didn’t expect much at the beginning, perhaps to be able to race with some people as the car was pretty much the same as yesterday, but we had a good start and then things kept improving as the race went on. I had some good battles and by the end we were catching the McLaren and AlphaTauri ahead. I think we got everything we could out of this race.”

Antonio Giovinazzi also made a great start to the race, like his veteran team-mate the Italian gained four places on the opening lap and quickly found himself in fourteenth. Giovinazzi enjoyed some good battles during the race whilst he too tried to look after his tyres. In the end fifteenth was all the Italian good muster, ahead of both Uralkali Haas F1 Team cars and the Williams Racing duo.

Giovinazzi believed that he got the absolute maximum possible from the race, and that the team has to be satisfied with the result based on where they started.

“We did the maximum we could, I don’t think anything more than P15 was possible today. We had a great first lap, gaining four places, and then we were in some nice battles for the rest of the evening. We struggled yesterday, but we knew with a good race we could finish ahead of both Haas and Williams – and that is what we delivered.

“We went for a two-stopper as we knew the degradation was high and the kerbs were hard, and at the end we were quicker than our rivals. Given where we started, we have to be satisfied with our race today.”

By Nick Golding
1 Mins read
AlphaTauri lost ground in their battle with Alpine for fifth spot in the Constructors’ championship, after neither Gasly or Tsunoda finished in the points at the Qatar Grand Prix.
Formula 1

"We were just too slow" - Pierre Gasly

By Nick Golding
2 Mins read
Pierre Gasly experienced a disappointing Qatar Grand Prix after finishing eleventh, despite starting from the front-row for the first time in his Formula One career.
Formula 1

By Nick Golding
1 Mins read
Mclaren’s hopes of finishing third in the Constructors’ standings are all but over, after a disappointing Qatar Grand Prix for the British team.