Would you believe it, Dungey and Musquin double up again in St Louis!

For the fourth time in 2015 the Red Bull KTM team scored a double victory in both classes of AMA Supercross as Ryan Dungey and Marvin Musquin swept all before them to win both main events in St Louis.

Yet again that master of the gate drop Andrew Short got away superbly on the BTO Sports KTM, but sadly for the veteran it didn’t last very long as he plunged off line in a jump into the tuff blocks lining the course as perennial winner Dungey led away.

The other man often getting good starts this year is Weston Peick on the JGR Yamaha, and he was now in second to Dungey as just behind him and hitting form after a bad run of results recently was Jason Anderson on the Rockstar Husqvarna, no doubt finding inspiration from his MXGP stable-mate Max Nagl and running the best in St Louis we have seen all year, he was in third and pressuring Peick.

After his win last week, Eli Tomac was up there, but unable to make the start and get away with Dungey, but he was forcing past rivals, as was Cole Seely. Another good run here from Josh Grant on the 22 Motorsport Kawasaki, a rider running consistently well all year and getting a good start here to run in top four early on.

It was “Diesel power” up front though, Dungey was doing what he has done all year when he gets a good start, pulling away, not making mistakes and making Supercross look effortless!

The man making the moves was Tomac, passing riders for fun as yet again fans watched him climb through the field after a poor getaway, Anderson certainly was not giving up his position and put Tomac in his place nicely, rapidly slowing the Geico Honda.

Peick started to slow mid race, allowing Tomac and Seely by and promoting Anderson into a season best second, fascinating to watch the differences between the risk taking, aggressive Tomac and the smooth, fluid style of Seely on the same Honda bikes.

Dungey was peerless though and even though Tomac passed Anderson with a few laps left, he could not close and Dungey yet again won when his team-mate in the 250 class did too, the fourth time that has happened in 2015.

Great ride for Anderson though and with a few riders now being absent through injury these sort of rides can quickly propel riders like Seely, Anderson and Peick up into top 5 positions in the championship. 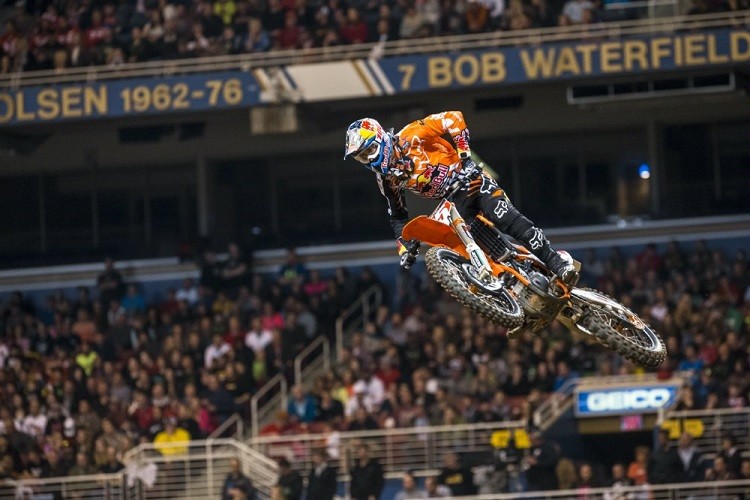 St Louis was the last event for the 250 East riders for a few weeks until both sides of the US come together in Las Vegas for the finale so it was the chance for someone to put one over on runaway series leader Marvin Musquin.

Star Racing Yamaha rider Jeremy Martin has proved he is capable of doing just that, and he did in St Louis after a great start. Musquin quickly block passed the Yamaha man, but Martin was in no mood to be behind and passed the French Red Bull KTM man quickly again. A great dust up ensued.

Sadly for Martin though he is not able to challenge for the title, that challenge falls to Geico Honda rider Justin Bogle who had a terrible start and needed a decent result to maintain any kind of pressure on Musquin who would take the East championship if Bogle finished outside the top ten.

Bogle dealt with the traffic in a cool manner to get into the top four behind the Pro Circuit Kawasaki of Joey Savagty as up front Musquin pulled a decent gap on Martin.

But for the fans the race was over really, Musquin did what he has done all year, won!  His fifth win of the season and one hand and four fingers on the title.

Fenati has First Pole since 2017 taken away after Penalty – McPhee...