Hansen started off his 2016 Euro RX title winning campaign in Mettet and hopes for more this year. Credit: IMG/McKlein

The 2016 FIA European Rallycross Championship saw a dominant display from a young talent with a well known legacy in rallycross: Kevin Hansen.

However, there were plenty of strong challengers during another exciting season of Euro RX who would make the young Swedish driver work hard to earn his first Supercar title, which Hansen secured at the penultimate round of the Euro RX of Spain.

2015 Euro RX Champion Tommy Rustad returned to defend his title by signing up with Albatec Racing, where he joined last years vice champion Jerome Grosset-Janin in a three car squad that saw Team Principal Andy Scott join the action at the second round in Norway. Tord Linnerud made the move from the FIA World Rallycross Championship to Euro RX using his 2015 Kristoffersson Motorsport Volkswagen Polo as he looked to challenge for the title whilst Peter Hedstrom started the season off with the Hedstrom Motorsport Ford Fiesta before making the move to the ex Rustad VW Polo and showing an improved pace in the last two rounds.

2015 FIA European Rallycross TouringCar Champion Fredrik Salsten stepped up to the Supercar class using a Peugeot 208 RX with support from the Hansen Development Academy team that were running Hansen this season whilst Tamas Pal Kiss returned for a second season of competition using the same Peugeot he campaigned with last year. Tamas Karai would return for a full season with his Audi A1 whilst Lukacs Kornel purchased the ex Koen Pauwels Mk3 Ford Focus for his first assault on the championship.

The field was boosted further as Ollie O’Donovan announced his return to the series in the developed Team RX Racing Ford Fiesta prepared by Tony Bardy Motorsport whilst fellow Irishman Derek Tohill began his first full season of EuroRX in the Supercar class after purchasing an ex OlsbergsMSE Ford Fiesta known as Molly and running it under the PFCRX banner.

World RX Team Austria Team Principal Max Pucher entered a Ford Fiesta for the season as Mats Ohman returned for a full season of Euro RX in 2016. Eklund Motorsport expanded to a two car squad in 2016 with Joni-Pekka Rajala joined by ex World RX driver Alexander Hvaal in updated but iconic Volkswagen Beetles which all led to a very competitive field of talented drivers who would duke it out for the title.

2015 Euro RX of Belgium winner Grosset-Janin put his knowledge of the Albatec Peugeot to good use by dominating all 4 qualifying rounds at the Mettet venue to take a perfect score ahead of Rajala and Linnerud. Both Pal Kiss and Salsten suffered a poor starts to their campaigns as Salsten rolled his Peugeot in Q1 whilst Kiss retired in the Semi’s. Grosset-Janin led home Linnerud and team-mate Rustad in SF1 to take pole in the Final as Hansen overhauled Rajala to take the front row spot in the Final as Kornel made his first appearance in a Euro RX Final.

Grosset-Janin was looking good for the win until a late joker saw him passed by Hansen who would take the win ahead of the French driver with Linnerud completing the podium. Kornel survived a hairy first corner to fend off a late charge from Rustad whilst Rajala retired on the first lap with mechanical issues. Grosset-Janin and Hansen left Mettet tied for the points lead after the first round.

The iconic Hell circuit in Norway played host to Round 2 of The 2016 FIA European Rallycross Championship. Credit: Albatec Racing

Hansen came out fighting at Hell in Norway for the second round of the 2016 Euro RX series and he followed Grosset-Janin’s example from Belgium by going fastest in all four Qualifying races to be Top Qualifier going into the Semi’s. There was a unique pattern as the next four fastest drivers were all Peugeot powered with Kiss, Rustad, Salsten and Grosset-Janin completing the top five.

Albatec Team Principal Andy Scott returned to Euro RX in what was now a three car squad for the rest of the season, however the Scot would only finish in 20th place after Qualifying. To match the might of the Peugeot ranks in the Semi’s Hedstrom, Martin Kaczmarski, Krzysztof Holowczyc, O’Donovan and Ohman qualified in the top twelve. 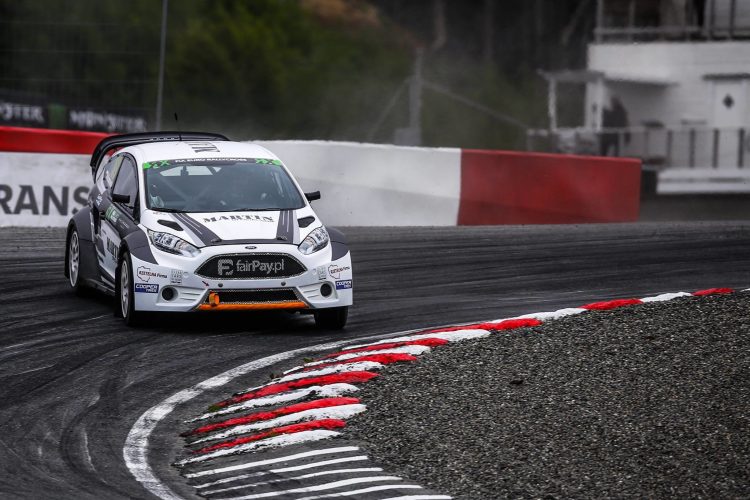 Martin Kaczmarski in his Ford Fiesta at Hell in Norway for the 2016 Euro RX of Norway. Credit: GymkhanaGRiD

After two hectic Semi-Final races that saw home hero Rustad fail to progress with power steering issues, the Final would see Hansen lining up next to Kiss with Salsten and Hedstrom ahead of Grosset-Janin and home talent Linnerud as they fought it out for top honours. Hansen led away from the line with Kiss and a fast starting Grosset-Janin whilst Salsten was left on the line.

Hansen would go to take the win from Linnerud, who jokered on the first lap and Kiss in third whilst Grosset-Janin suffered with visibility issues and would come home in fifth behind Hedstrom.

Hansen led the Drivers Championship after two wins on the trot with a twelve point lead of Grosset-Janin who had Linnerud only two points behind.

Derek Tohill leads the pack at Holjes in Sweden, Round Three of The 2016 FIA European Rallycross Championship. Credit: PFCRX

Round three of the season took place at Holjes in Sweden and the circuit known as “The Temple of Rallycross” provided stern challenge to the Euro RX competitors. For the first time during the year Qualifying in the mixed conditions saw four different drivers set the pace with Hansen fastest in Q1, Kiss fastest in Q2, Hvaal quickest in Q3 and Salsten improving in pace by going quickest in Q4. All four men qualified into the Semi’s as Hansen was led the way being joined by all three Albatec drivers, with Rustad lucky to go through after a gutsy drive in Q4.

During the Semi-Finals, a collision between Rustad and Scott at the Final turn saw Scott out of the running and Rustad progress through whilst Grosset-Janin missed a spot on the Final but one place. The Final saw Hansen line-up with Salsten on the front row, Linnerud and Hvaal on the middle row with Kiss and Rustad completing the grid.

Derek Tohill and Jerome Grosset-Janin battle it out during Qualifying in Holjes for the Euro RX of Sweden. Credit: PFCRX

As Hansen took the lead from Salsten and Hvaal, the pursuing pack of Rustad, Kiss and Linnerud took to the joker on the opening lap which would be to their advantage later on. Hansen led home Salsten in a 1-2 finish for Hansen Development whilst Kiss managed to fight his way through to take the last place on the podium after a race long duel with Rustad, Linnerud and Hvaal.

Hansen led the Drivers Standings as the series took a two month break with a 23 point lead of Linnerud. Grosset-Janin dropped to third in the standings after failing to get out of the Semi-Finals whilst Salsten and Rustad completed the top five.

The Circuit de Catalunya was host to the penultimate round of the season and it also presented Hansen with his first chance of securing the Drivers Title. The Swedish driver started off well by going fastest in the first three Qualifying races, however it was Hedstrom who went quickest in Q4, having replaced the Ford Fiesta with the ex Rustad 2015 VW Polo. Grosset-Janin re-discovered his fast pace as he took second fastest ahead of Linnerud and was the fastest of the Albatec trio with all of them making the Semi’s.

Hansen took the Semi-Final One victory with Linnerud in second and team-mate Salsten making the Final. In SF2, Grosset-Janin dominated the race to take the win ahead of team-mate Rustad with Hedstrom showing more speed in his Polo, however the race saw a lot of contact at the hairpin where a tussle on the first lap between Hedstrom, Rustad, Scott and Karai saw the Scottish driver lose out on a place in the Final.

In the Final itself, Hansen’s goal was clear: Finish the event with a 30 point lead over Linnerud to secure the title before going to the last round in Latvia. A jump start from Hedstrom heightened the anticipation as at the second start Hansen and Grosset-Janin fought for the lead into turn one, however the French driver lost out at turn two after further contact with Hedstrom dropped him down the order.

Hansen kept the lead through out the race and with Linnerud being pursued by Rustad, it looked as thought the title fight was going to Latvia. However the fortunes changed as Rustad took his joker on lap three, forcing Linnerud to counter by taking his joker on the following lap. Rustad carried more speed into turn one and held second place as Linnerud tried to fightback, but to no avail. Hansen took the win and the title as Rustad led home Linnerud with Grosset-Janin fourth ahead of Hedstrom and Salsten who was slowed with a puncture.

The 2016 FIA European Rallycross Championship made its debut in Latvia in difficult conditions. Credit: PFCRX

The Riga circuit in Latvia made its debut in Euro RX this season and to add to the hard task of learning the track as soon as possible, the drivers and teams were met with difficult wet conditions as they fought it out to win the final event of the year. With the title sealed, Hansen completed Qualifying as Top Qualifier for the fourth event in a row with Hedstrom, Grosset-Janin, Rustad and Kiss completing the top five places. Former TouringCar champion Derek Tohill put the knowledge gained during the summer test to good use as he qualified for the Semi-Finals for a second event in a row.

In the Semi-Finals Grosset-Janin took the win in SF1 ahead of Hansen and Kiss. Semi-Final two saw Hedstrom take the lead of the race whilst Linnerud battled with Salsten. An early joker by Rustad proved to be the best tactic as he then chased down Hedstrom as Salsten fought back to try and get in the top three. Contact in the hairpin saw Hedstrom spin and drop down to third whilst Rustad took the win from Salsten on the road. The stewards later penalised the Hansen Development driver.

Tommy Rustad took the win at the final round of Euro RX in 2016. Credit: Albatec Racing

The Final saw Grosset-Janin and Rustad on the front row with Hansen and Hedstrom on the middle row as Kiss and Linnerud completed the grid. Contact in the wet conditions saw Hedstrom slide wide to allow Rustad into the lead as further back contact between Hedstrom and Hansen saw the 2016 champion spun out to the wall and damage the Peugeot. However Hansen charged through the pack to the talent that earned him the title. Rustad took the win from Hansen after a very scary moment with Kiss completing the podium.

The 2017 FIA European Rallycross Championship calendar looks like this:

Once again the Championship showed that it has a quality field of drivers fighting it out for one of the most coveted titles outside of World RX and the 2017 season will be another fine chapter in the history of this great series where the best drivers in Europe are sure to come back and fight it out hammer and tongs to see who will be the 2017 Champion.