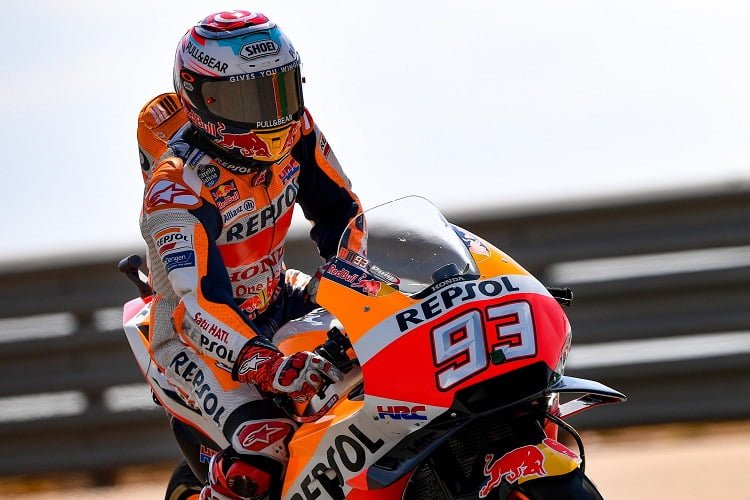 Marc Marquez was one of five riders to lap inside the Aragon race lap record as the reigning champion topped second practice on Friday afternoon. Marquez set a blistering pace on new tyres late in FP2 to edge out Jorge Lorenzo as Honda responded to Ducati’s earlier dominance at Aragon, while Yamaha’s problems continued.

Ducati riders had locked out the top four places in FP1 with Marquez eight tenths adrift in sixth but the championship leader made an encouraging start to FP2. Having run the opening session on a single set of tyres, Marc had new rubber at his disposal and immediately set his quickest time of the day, a 1:48.644. It wasn’t enough to lead the session early on though, with Andrea Iannone three tenths quicker on his Suzuki.

With much of the focus on race preparation, the leaderboard saw very little change until a late scramble saw riders jockey for position ahead of qualifying. Marquez, running medium front and soft rear tyre for the first time, leapt to the top on a 1:48.171, but his time was almost immediately eclipsed by Andrea Dovizioso who used a soft front tyre to go three tenths faster.

Marquez’s second timed lap on his new tyres would prove even faster though and his 1:47.382 lap would ultimately remain unbeaten, despite a late surge up the order by Lorenzo. The no.99 wound up a tenth adrift in second with his team-mate Dovizioso close behind in third while Cal Crutchlow all-but-matched the Misano winner to pinch fourth from Iannone.

Danilo Petrucci was sixth ahead of Dani Pedrosa and Alvaro Bautista while the factory Yamaha riders both had to rely on last-gasp flyers to claim the final two spots in the top ten. Valentino Rossi was ninth fastest, half a tenth clear of Maverick Vinales, but both riders were over a second off the pace and will be forced to defend their spots in Q2 in Saturday’s third practice session.