Lewis Kent – “We’ll be back to improve on last year”

Lewis Kent made his touring car debut in the TCR UK Series last year where he drove the Hyundai i30 N TCR run by the Essex and Kent Motorsport squad.

With the high points of the season being the two podium finishes taken at Brands Hatch and Oulton Park, The Checkered Flag spoke to Kent at the 2019 Autosport International Show.

You competed in your first season of Touring Car racing last year in the TCR UK Series, what are your thoughts about how it went?

“It was a good year overall and we found it very enjoyable with a family atmosphere throughout the year. As one of the smaller teams on the grid, being able to compete with the other teams out there was a great experience,” explained Kent.

“We’re looking to carry on this season, however, this depends on budget. Half of my finishes last year were due to car troubles so whilst it was our first year with the car and its been a learning experience, we look to improve upon that this year.”

Your best finishes during last season were the two podium finishes taken at Brands Hatch and Oulton Park. What are your reflections on these high points?

“The Brands Hatch podium was fantastic to get as it’s my home track so that was great. The podium at Oulton Park was also great but I still feel that we lost out on second place on the last lap,” said Kent.

“It was my error that cost me the place and I’ve learnt a lot since then so all in all, two great performances. It shows that the series is both equal and fair, especially for a team of our size. We’re a more experienced team now so we take that knowledge into this year.”

In December you tested alongside the FIA World Touring Car Cup (WTCR) Hyundai squad of BRC Racing at Portimao. What was it like to work alongside the likes of Gabriele Tarquini, Norbert Michelisz, Nicky Catsburg and Augusto Farfus? 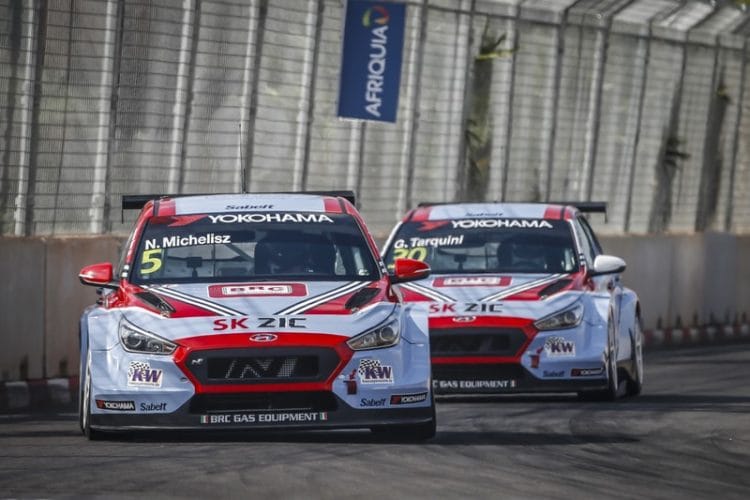 “It was an amazing opportunity! On the second day, I followed Augusto Farfus around the circuit and improved my lap times further. Nicky Catsburg was monitoring my practice times from the pitwall and he was very impressed with how I improved my times,” said Kent.

“To have drivers of this calibre telling me that I have a future in the sport is really awe-inspiring and I couldn’t have asked for more. Working with Tarquini especially was a great experience and I learnt about how to push the car harder and faster as well as work on setup more which is knowledge I can use later this year to be more comfortable in the car.”

Will you be returning to the TCR UK Series this year?

“Dependent on Budget, we plan to contest both the TCR UK Series and the TCR Iberico Series, which has returned for this year and has two races in Spain and two races in Portugal,” confirmed the Essex and Kent Motorsport driver.

“One of the Portuguese races is on the same weekend as the FIA World Touring Car Cup (WTCR) round so we’re looking to learn more with Hyundai Motorsport Customer Racing.”

The 2019 Calendar for TCR UK includes a visit to the Spa-Francorchamps circuit in Belgium. What are your thoughts on returning to Spa and the chance to race alongside the TCR Europe Competitors?

“This is very much a part of a programme where I’m looking to progress from the UK series to TCR Europe so that chance to race against those drivers this year in the same races is fantastic,” admitted Kent.

“I’ve raced at Spa before in both Sports 2000 prototype machinery and also in the Citroen C1 24 hours and I love this circuit. Its one of those tracks that every driver wanted to race on and I can’t wait to get out there.”

The Checkered Flag sends its thanks to Lewis Kent for taking the time to speak with us at the NEC.

By Caitlin Carroll
1 Mins read
Jessica Hawkins makes history as she becomes the first British woman to win in TCR UK. She took her maiden victory on 18 April 2022 at Oulton Park.