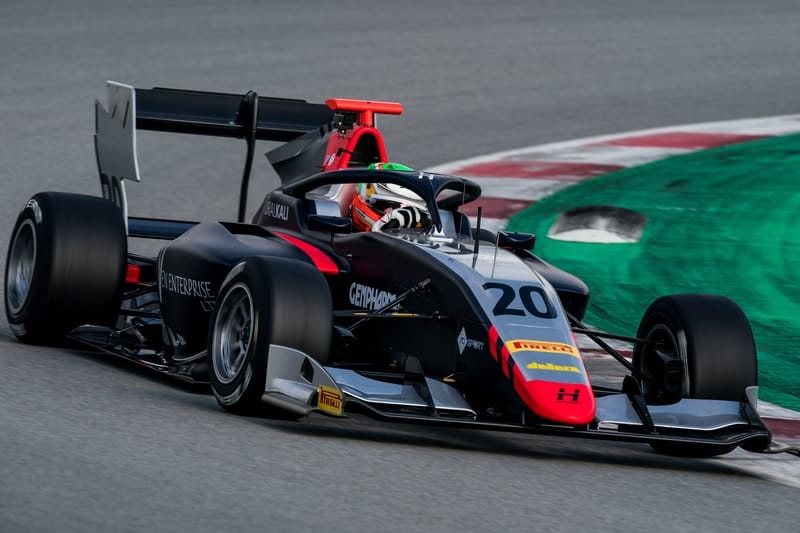 Hitech Grand Prix‘s Leonardo Pulcini set the fastest time in the morning session to top the timings ahead of Liam Lawson and Robert Shwartzman.

American Logan Sargeant hit the track first ahead of the rest of the pack, whilst it was Raoul Hyman who set the early pace around the Catalan track.

Felipe Drugovich went quickest ahead of Lawson, before Andreas Estner brought out the first red flag of the day.

The German had clipped the wall at Turn 8.

Shwartzman claimed the top spot at the re-start, but Pulcini found some extra pace to better the Russian’s time.

Heading into the final hour, it was once agin Shwartzman on top but Lawson went quicker than the PREMA Racing driver’s benchmark with thirty minutes on the clock.

In the dying stages, Pulcini put his head down to go quickest once again.

Lawson and Shwartzman were second and third.

Australian, Lawson was the first to tackle the wet track and set the early pace from Dutchman Richard Verschoor.

In the opening hour, proceedings were halted twice.

Firstly, Niko Kari had stopped at Turn 6; and secondly, Artem Petrov ran wide and stopped in the gravel at Turn 3.

Petrov brought out the third red flag as well, when he span and stopped at Turn 11.

After the third stoppage, Lawson improved further on his benchmark but Shwartzman got the better of the MP Motorsport driver.

The fourth red flag of the session was brought out after Ye stopped at Turn 22, with the fifth stoppage of the afternoon being caused by Teppei Natori in the final half hour who went off track at Turn 4.

With the track drying out, most drivers switched to slick tyres, with Felipe Drugovich claiming the top spot to edge out Max Fewtrell.

Action for the second day of testing gets underway at 9am local time.

Vesti joins Mercedes ranks as he switches to ART

By Joe Ellis
1 Mins read
It’s perhaps about time Vesti was signed to a junior program and he will be considered a title favourite in Formula 3 as he looks to take down his dominant former team.
Formula 3

By Joe Ellis
1 Mins read
A second year with the same team should bode well for Smolyar who will be keen to be standing on that podium on a regular basis.
Formula 3

By Joe Ellis
1 Mins read
The Czech rounds off the Hitech F3 team with Red Bull duo Crawford and Iwasa looking to Staněk for vital experience.