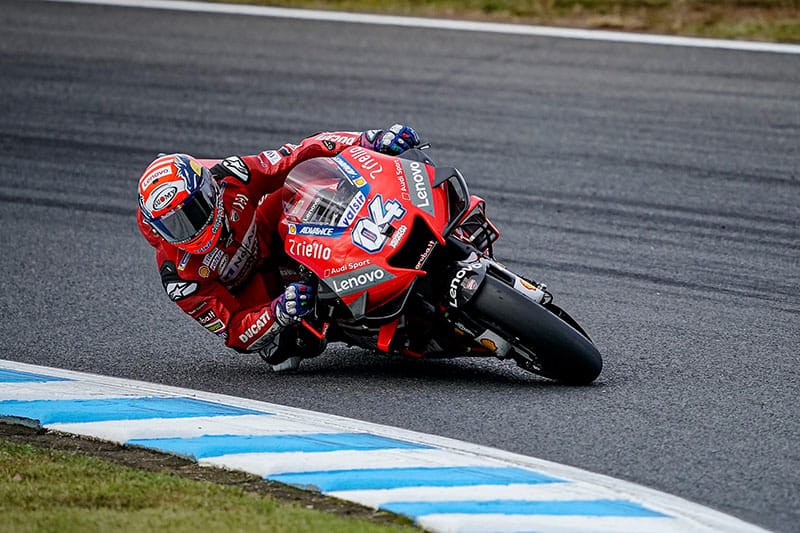 Andrea Dovizioso battled his way through the order to record his 100th career podium at Motegi.

Dovizioso made another fantastic start, from seventh on the grid, and was immediately challenging inside the top five. However, he would struggle to make progress for the first 10 laps.

Jack Miller and Franco Morbidelli were ahead of him on the circuit. Their soft tyres began to lose grip and, as a result, Dovizioso was finally able to move ahead into third.

Despite immense pressure from Maverick Viñales, Dovizioso was able to hold on to his podium spot. The Italian was catching Fabio Quartararo as the race came to an end. One more lap and he would have finished second.

Speaking about his mixed fortunes during the race, Dovizioso commented:

“At the end of the race my feeling with the bike was really excellent, so much so that we did our fastest lap on the penultimate lap. Unfortunately, I wasn’t able to pass Quartararo, who I saw was in a bit of difficulty in the final stages, but I think I could have overtaken him if there had been one more lap.

“I’m quite disappointed with my first part of the race however, because despite having good grip we were unable to be fast enough. We’ll now have to analyze the situation in detail to understand what the problem was and be ready for the race at Phillip Island.”

100 and Counting for Dovizioso

Dovizioso’s podium means that he becomes only the 10th rider to achieve 100 podiums in motorcycle Grand Prix racing. In his 11 years in the premier class, he has only had one campaign where he hasn’t stood on the podium at least once. That was in 2013, his maiden year with Ducati. Since then, he has achieved 37 podiums in six years.

Dovizioso has also taken eight podiums with Tech 3 Yamaha, as well as 15 for Repsol Honda. In his maiden MotoGP campaign, he secured one podium for the JiR Team Scot Honda outfit.

He also secured 25 podiums across three seasons in the 250cc class. His most successful campaign was the 2004 125cc Championship. He took 11 podiums on the way to the title, including five victories.

His latest podium sees Dovizioso close in on second place overall. He has a commanding 55-point advantage over both Alex Rins and Viñales.