Dixon wishes “everybody was here to celebrate” after Texas win 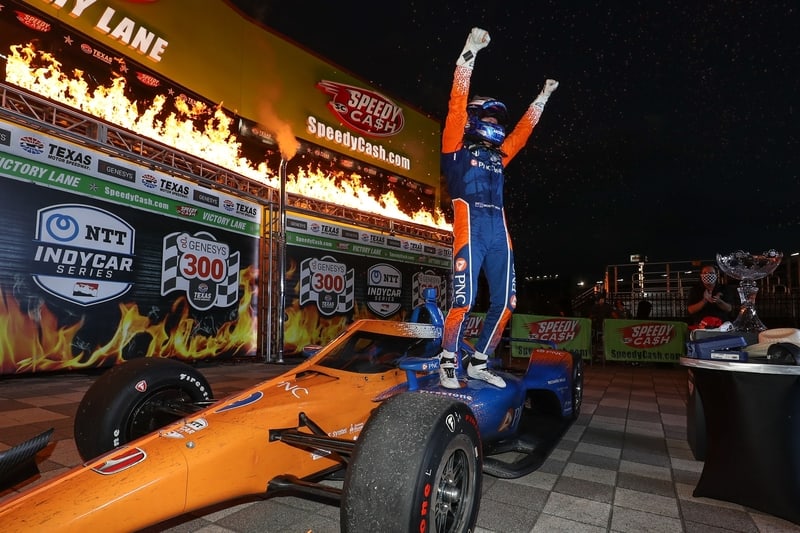 After taking victory in the season-opening race of the 2020 NTT IndyCar Series, Scott Dixon has spoken of his sadness that fans were not able to be in attendance at Texas Motor Speedway for the Genesys 300. Dixon took his #9 Chip Ganassi Racing Honda to the win on Saturday night, but there were no fans in the stands and a limited number of crew members due to the ongoing COVID-19 pandemic.

After several months of delays, the 2020 NTT IndyCar Series finally got underway, with the teams and drivers diving right into the deep end with a single-day event at Texas Motor Speedway; one of the fastest and most intense locations on the calendar. With just one practice session and qualifying to go off of to prepare for the race, the teams and drivers had to work fast to get themselves acclimatized and the setup of the car done properly.

Chip Ganassi Racing seemed to get the setup on Dixon’s #9 Honda to a fast and stable point. The New Zealander would finish practice with a fastest lap speed of 215.995-mph. In qualifying, however, Dixon admitted that he played it a little too safe. He would qualify on the front row in second place, with Team Penske‘s Josef Newgarden taking pole position by just three-hundredths of a second.

Dixon may have missed out on pole position, but he seemed to have a much faster car in race trim. Newgarden would lead the opening thirty-two laps until he started to suffer from numerous issues, mostly related to irregular tyre wear and vibrations. Dixon capitalized on a slow Newgarden to take the lead and would go on to build an almost ten-second lead until a caution was called for debris as the race neared its halfway point.

Dixon would then lose the lead thanks to a slow pit-stop under yellow, with the Ganassi driver also losing second-place to his young team-mate, Felix Rosenqvist, before repassing the Swede on the restart around the outside. With the confidence of a great car underneath him, Dixon dared to try and pass Newgarden for the lead on the outside of turns one and two. The move worked and Dixon would soon begin to sprint away to another ten-second lead.

The only driver able to take the fight to Dixon as the race neared its end would be Ganassi-stablemate Rosenqvist; with the Swede catching up when Dixon was bogged down in lapped traffic. However, with just over ten laps to go, Rosenqvist would spin whilst trying to lap James Hinchcliffe and would find himself in the barrier on the exit of turn two. Felix would retire as a result.

Furthermore, the ensuing caution would come late enough that the race would restart with just three laps to go. With such little time before the restart, IndyCar would not move the lapped cars out of the way of the leaders. Dixon would restart with multiple lapped cars between himself and second-placed Simon Pagenaud, allowing Dixon to cruise home to take the win by over four seconds.

Post-race, Dixon would give his thanks to his team for putting him in a position to win. However, he would express his sadness that he had taken the win without being able to share it with any spectators in the grandstands.

“I can’t thank the team enough, everybody at PNC. It’s such strange times right now, and I just can’t thank the team [enough],” Dixon said yesterday, “It was such a team effort. We had a couple of mistakes at the start and throughout the race, but we recovered. It was awesome. Honda, they were huge with the power out there. It was just so fast. Any situation we were in, we could just go for it. Huge thanks to everybody involved. Bummed that the fans aren’t here. We wish everybody was here to celebrate.”

Dixon went on to speak of the difficulties of traffic during the race. Overtaking was made even trickier due to the traction compound that had been put down on the speedway back in November for the NASCAR Cup Series race. This compound had become ultra-slippery since then, meaning that the drivers were forced to run low through the corners at the risk of spinning out. This made overtaking, especially with lapped cars, very difficult.

“We could check out. It was just when we got to a few people that were going to be a little more challenging to pass,” said Dixon. “That definitely cropped up. Will [Power] was pretty tough, and I knew he was going to be. He was trying to stay on the lead lap. A bunch of those guys were. [Alexander] Rossi, I think, was going two laps down, so I don’t know what he was up to. So, all in all, that’s racing. We had to make some big, bold moves around the outside into Turn 1, especially on Felix [Rosenqvist] and on Josef [Newgarden], which was definitely a nice repay and a nice way to get back to the lead.”

Dixon went on to give further thanks to his team for giving him such a fast car in the race. The Chip Ganassi Racing cars were the fastest of all on the race track, perhaps owing to a very productive practice session earlier in the day as well as successful preparations back at the team’s base in Concord, North Carolina. Dixon would also, again, pay tribute to Honda for supplying him with “huge” power on the track.

“The car rolled off the trailer really fast,” said Dixon. “We’ve also been using the Honda simulator in Indy for the last three weeks, and that was a big help in our preparation. It’s not often you get an amazing car like this. It was a fun night for us and a great way to get started back [racing] after a long break. The Honda engine, it was huge, man, the power out there. Our car was just so fast tonight, in any situation. We had to make a couple of bold moves tonight, and we could just go for it. Huge thanks to the team and everyone involved.”

The 2020 NTT IndyCar Series will continue in just under a month’s time with the second round of the season, the GMR Grand Prix at the Indianapolis Motor Speedway‘s Grand Prix circuit, on Saturday, July 4.

Roger Penske Makes Tough Decision to Not Allow Fans at the Indianapolis...

Pagenaud: “It was a tough, dramatic weekend, but we prevailed”