Maldonado Closes In On Title As Bird Wins

Pastor Maldonado has come to within a point of winning the GP2 Series after both he and nearest rival Sergio Perez retired from an eventful Monza feature race, won by ART Grand Prix driver Sam Bird.

Bird took the lead from polesitting teammate Jules Bianchi at the start of the race. The race started in chaotic circumstances after Rodolfo Gonzalez managed to crash warming his tyres up on the installation lap. Luca Filippi lost control at the second chicane on the opening lap and crashed into Giedo van der Garde, while Dani Clos also spun out, bringing out the safety car. At the restart, Maldonado launched his Rapax car over the back of DAMS driver Romain Grosjean at the first chicane, which resulted in Marcus Ericsson, Brendon Hartley and Luiz Razia tangling further back.

Soon after the restart Perez was taken out of the race at Ascari by Michael Herck, all but ending the Mexican's title chances, also indicating pain in his right shoulder once he was out of the car. Maldonado brought his car into the pits and retired, and began celebrating with his team, thinking he had won the title. However, he has a lead of 27 points over Perez, with 27 points still available. Thus, Perez can still tie on points with Maldonado, but only if he wins the remaining three races, takes all three fastest laps and takes pole position in Abu Dhabi. 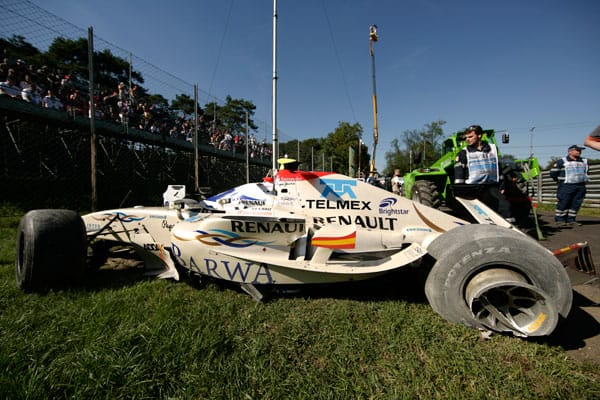 The race settled down after this, with Bird taking his first win of the season. Bianchi repassed Oliver Turvey for second place, while Christian Vietoris finished fourth for Racing Engineering, ahead of Jerome D'Ambrosio. Trident pairing Adrian Zaugg and Edoardo Piscopo avoided the drama to finish sixth and seventh. Max Chilton will start on pole for the sprint race after finishing eighth. Fabio Leimer had been running up in the points when he had to retire late in the race.

Behind, Davide Valsecchi, Fabio Crestani and Alvaro Parente all received drive-through penalties for cutting chicanes, leaving them to finish ninth, tenth and 12th respectively. Parente also had to contend with broken steering for much of the race after contact earlier on. Charles Pic finished 11th after changing his front wing early in the race, while Grosjean managed to finish a lap down in 13th.