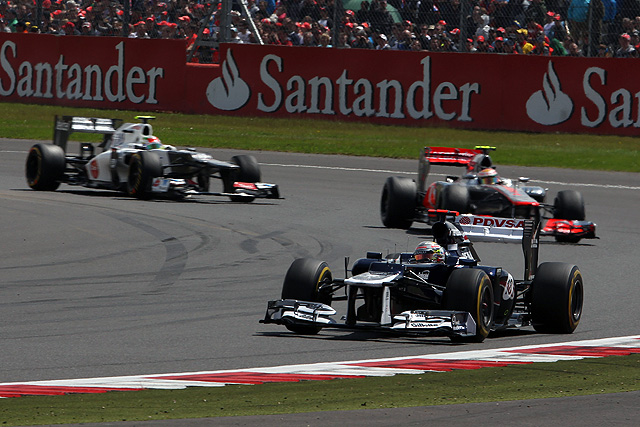 Williams came away from their home race with just two points thanks to Bruno Senna as Pastor Maldonado was once again caught up in a controversial incident.

Senna put a disappointing day in qualifying behind him and finished ninth after starting fifteenth on the grid. He became involved in an entertaining scrap with Force India's Nico Hulkenberg and Jenson Button in the last few laps which he was the eventual victor of.

“It was a good race for us today, despite starting from further back than we would have liked, and we gained a few positions on the first lap. We then had a tough race fighting against the Force India's and the Sauber's. I’m happy with the result though as things are looking up and if we can qualify a bit higher in the next race, we will be looking to push for more points in the future,” the Brazilian said.

Maldonado's day ended in disappointment however. Following a pit stop, he was fighting to stay ahead of Sauber's Sergio Perez before the two collided. Perez retired on the spot, but Maldonado was able to recover to the pits for repairs and finished in sixteenth place after qualifying a strong seventh yesterday.

The Venezuelan was later fined by the FIA for his involvement in the incident and blamed cold tyres for the collision.

“Our race was compromised after the incident with Perez. I’m disappointed because the car was looking much more consistent after the pit stop and towards the end of the race. I hope to get my championship back on track in the next few races and put the team up at the top again” he explained.

“Both Pastor and Bruno had very good starts and were pushing hard in the initial stages of the race. Unfortunately Pastor was involved in a racing incident with Perez on his second stint which lead to a premature pitstop for a damaged rear-right tyre which ultimately compromised his race. After the race the stewards issued Pastor with a reprimand which as a team we accept,” the team's chief operations engineer, Mark Gillan said.

“Bruno ran an excellent race and despite a small spin in the first stint finished in ninth having attacked and then defended his position very well in the closing stages of the race,” he added.

By Nick Golding
1 Mins read
Red Bull Racing have announced an exclusive multi-year partnership with well-known gambling and entertainment company PokerStars ahead of the 2022 season.
Formula 1

By Nick Golding
1 Mins read
With a new name, logo, car and driver line-up for 2022, the Alfa Romeo F1 Team ORLEN are looking well prepared for the upcoming pre-season test at the end of next month.
Formula 1

By Paul Hensby
1 Mins read
Revisions to the Albert Park track are likely to make the circuit around five seconds a lap faster, according to the CEO of the Australian Grand Prix Corporation, Andrew Westacott.