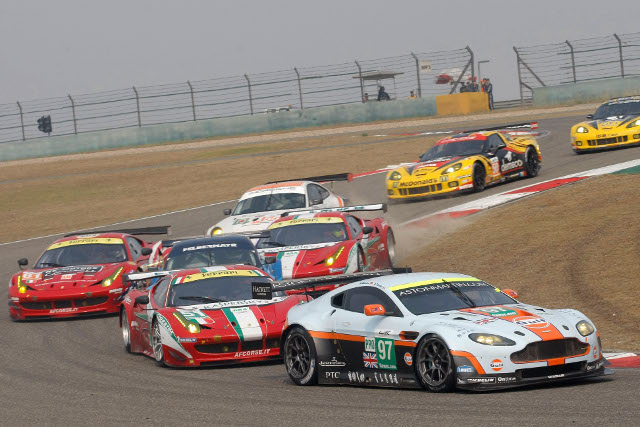 The duo emerged on top of a duel with the Team Felbermayr-Proton, Darren Turner striking the decisive blow in passing the Porsche on track to take the lead in the final hour. The two team had been leapfrogging each other through pitstop sequences since the early laps when Mucke re-passed Richard Lietz for the lead having lost the advantage Turner earned by taking pole position in the class.

Running shorter stints than their rivals throughout the race time after time the Aston pairing had to give up the lead to pit, only to regain the point once the Lieb and Lietz crewed Porsche made its corresponding stop.

A final stop for the Aston Martin team, shortly after the start of the final hour put Turner back on track only just behind the Porsche. The team unsure of whether their rivals would have to follow them to the pits for a fifth stop Turner had no option other than make a pass on track to take the lead – ultimately, the Porsche did need a fifth pit visit to make it to the end of the race.

“We’ve had an amazing weekend,” said Turner. “This result is a great reward for everyone’s efforts. The car has been at the sharp end in every race and the guys here have got faster and faster in the pit stops.  It’s a true team effort and they should all be proud of what has been achieved here.  What a way to end the season!”

The result also secured second place in the class championship for the team on their return to the GT ranks, with Felbermayr-Proton in third. Ferrari team AF Corse won the championship.

AMR team principal John Gaw said; “our objectives for our return year to GT racing were to be competitive and score podiums and we can return to Banbury confident that we have achieved and exceeded these – we’ve finished seven out of the eight races and scored podiums on all of those. Everyone involved in the team this year should be very proud and we thank them all for their hard work and commitment.”