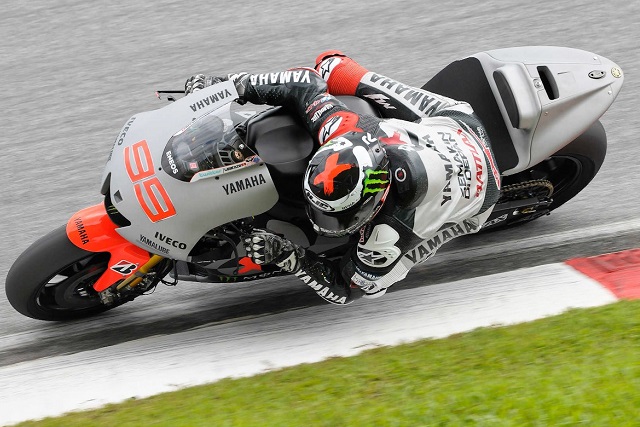 Jorge Lorenzo admitted he wasn’t as comfortable today as he had been earlier in the week after overnight rain left the Sepang circuit short of grip on Thursday. The world champion held onto the quickest time of the test overall but he was frustrated that he wasn’t able to learn more on the final day.

“The practice was wet at the beginning of the day so we exited and tried the bike on the wet. It wasn’t bad, I made the fastest wet time but when the track became dryer it was never the same as yesterday. It was much more slippery and so harder to equal yesterday’s time. We made a complete simulation, it was a little worse than I expected because we had some problems with the front tyre in braking; it didn’t give me much confidence so I slowed my pace a little. The conditions were extreme this time so it was harder to equal the simulation we made in the first Sepang test.”

Despite finishing a competitive fourth, Yamaha teammate Valentino Rossi admitted he wasn’t as comfortable as he had been at the first test but remains positive ahead of the upcoming season with two tests to go for the team.

“This test at the end is positive because we are in fourth place and not so far from the front. We are struggling a little more than the first test though; we were unlucky and suffered a little electrical problem that lost us some time and some other little problems. We tried to improve our performance and we fixed some problems but not all. The balance is positive; we have had another three days with the bike, and ridden more kilometres to take the bike back to the top and closer to the limit. Now we are looking forward to Austin.”