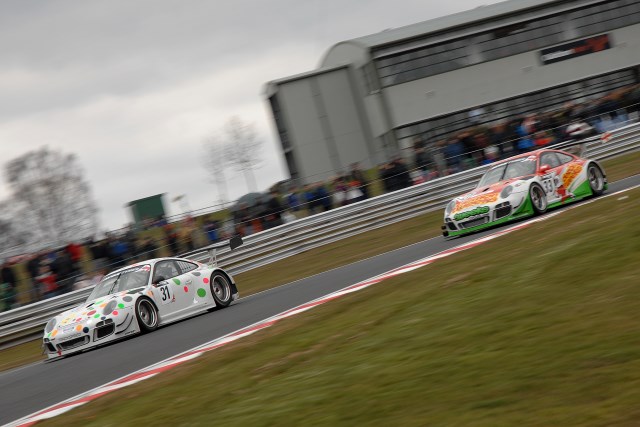 Trackspeed began the Avon Tyres British GT Championship with a 1-2 at Oulton Park with Phil Keen taking the lead from Nick Tandy on the final lap of the first 60-minute race of the weekend.

The swap put Keen in the lead for the first time in the #33 Porsche started from fourth on the grid by Jon Minshaw, who moved into second place on the opening lap past Ahmad Al–Harthy and Jay Palmer. Palmer – starting on the front row alongside poleman Benji Hetherington – had already been off on the first green flag, retaking his position, though with the Vita4One Team Italy car sporting damage before a racing lap had begun.

He was joined in the wars almost as soon as the race begun. Gregor Fisken was caught out by the narrowing track approaching Old Hall, barging into Andrew Howard in the Beechdean Aston Martin, in turn taking out Jason Minshaw in the Fortec Motorsport Mercedes SLS, the team car to the one that Hetherington had taken into the lead.

Howard and Minshaw continued away from the scene of the accident, avoiding the need for an immediate safety car, but both retired soon after as a direct result. Fisken raced on, handing over to Richard Westbrook for the second half of the race. However they would be excluded from their sixth place at the flag.

A separate incident, Derek Johnston spinning the #41 MTECH Ferrari out of Cascades from and early fifth place, did bring out the safety car for a brief spell, before Hetherington was unleashed back into a lead that he pulled out to five seconds over Minshaw before he led the early move to the pits after 25 minutes of racing.

Hetherington pitted a lap later, handing over to Ollie Hancock. Hancock returned to the race in second, JRM Racing’s soloist Jody Fannin leading for two laps before making his own stop and departing the top ten after running in the top five through the first half of the race.

Hancock retook the lead as Fannin pitted but was unable to match the Hetherington’s times and was now being chased by the Pro half of most of the pairings behind, led by Keen and Tandy who had passed both Michael Caine (in for Al Harthy in the #1 plated Motorbase Porsche) and Glynn Geddie on his out lap from the pits.

At the start of a determined defensive drive Hancock held off Keen for a handful of laps but lost out to Tandy, the Porsche works driver passing both Keen and he, on the same lap. Tandy’s move on Hancock, climbing Clay Hill, leaving enough of a gap for the order amongst the top three to turn itself inside out in a single lap. Tandy made good his escape, moving six seconds clear before easing back with reports of a vibration bad enough to let Keen take the lead on the final lap.

Tandy explained his move to the lead to theCheckeredFlag.co.uk; “Phil probably accepted that seeing as I’m not in for the full championship I would probably push a bit harder. I managed to get up the inside of Sam on the run up to Druids but he pushed me onto the grass up the hill, I got the exit out of Knickerbrook which was then the outside for the hill but the inside of Druids. He really tried to ease me out and push me on the grass otherwise we’d have had contact but I kept my foot in and squeeze back on over the crest and kept the inside line and then just to repay the compliment for pushing me off I thought I’d try and hang it him out a bit on the exit of the corner to let Keeny up the inside which he managed to do.”

Struggling with the handling of the beefy SLS, though his lap times improved all the while, Hancock continued to fall back, losing third to Glynn Geddie at Old Hall and then becoming the leader of a furious battle for fourth through tenth inclusive with Caine and Westbrook leading the queue behind the Merc, Ecurie Ecosse’s Olly Bryant, Matteo Bobbi, Dan Brown and Allan Simonsen swapping places between them. 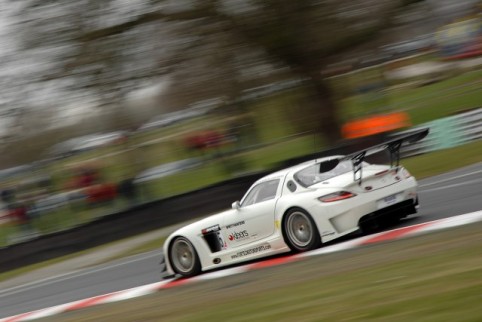 The battle was thinned by contact at Lodge between Bobbi in the back Vita4One Team Italy Ferrari and Brown’s #888 888Optimum BMW Z4. Their problems – both pitted with damage – promoted MTECH’s Matt Griffin and Matt Bell into ninth and tenth at the flag respectively, though both were promoted a place by Fisken and Westbrook’s penalty with John Gaw and Phil Dryburgh taking the final point.

Fortec Motorsport were another to reap late reward as Geddie stopped from third with gearbox problems on the McLaren to give Hetherington and Hancock the podium place their individual performances deserved. Caine finished fourth on track ahead of Westbrook, though it was Hector Lester and Allan Simonsen who were credited with fifth place with Bryant and new Ecurie Ecosse teammate Marco Attard combining for sixth. Aaron Scott and John Dhillon gave AF Corse seventh on the Italian team’s British GT debut.

Zoe Wenham and Declan Jones took the GT4 win for Century Motorsport, Jones taking the lead after Optimum Motorsport were penalised for not meeting the minimum pitstop time when Rick Parfitt Jr. handed over to Ryan Ratcliffe. They kept second place with APO Sport pairing Alex Osborne and James May completing the class podium, though May completed the race trailing smoke.

“We had a really good stop which obviously got us up and then my pace as well,” said Jones. “Then a couple of laps after my stop I overtook second and then was just hunting down first and the team came over the radio to say he’d got a stop-go and that I was first and I just carried on working a gap so that he couldn’t catch me and every time I looked at the pitboard the gap was getting longer and longer so I kept pushing and it got to a point where I knew they were far enough back so I just bought it home.”

Steve Chaplin, who started from pole position in GT4 for Complete Racing, lost the lead to Osborne on the opening lap and retired after spinning at Lodge.