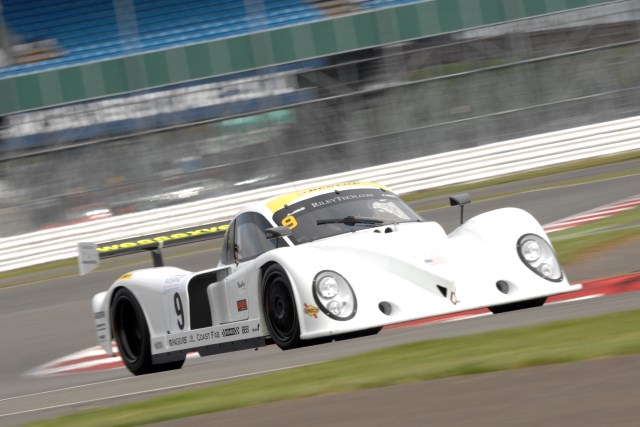 The debut pole was only fitting for the first race on the 1.85 mile track based around the Wing paddock, cutting through between The Loop and Chapel onto the Hanger Straight. Mustill set the lap in the car her shares with Bob Berridge and John Martin only ten minutes into the 45 minute session.

Initially his 1:01.974 effort put the white Daytona Prototype lookalike – actually a track day car – nearly two seconds clear at the front of the grid. At the time second place on the grid was held by the Horsepower Racing Aston Martin of Andy Schulz and Paul Bailey. However, over the remaining half hour the Aston duo were shuffled down to fourth, their track time limited by a split power steering hose, as Javier Morcillo and Nigel Greensall moved ahead, both taking second place at the time.

Morcillo made his move to the front with a quarter of an hour remaining, cutting the Riley’s advantage to 1.111 seconds. The Spaniard looked to have secured the outside of the front row as the session wound down in the final minutes, only for Greensall to put the Rapier SR2 – that took pole for the BEC opener at Donington Park – second on a lap of 1:02.905, nine hundredths faster than Morcillo, but still a second away from Mustill’s pole position.

Their race pace – however – remains unproven though Martin did describe the machine a “bomb–proof” mechanically. Having only shaken down the car on Wednesday with further testing Friday the team has not run the car in the wet and Martin expects as many as five pitstops during the three hour race.

With Marcus Clutton and Jordan Witt fifth in the Class One Chevron GT3 Ian Loggie and Chris Jones were fastest Class Two car in their Team Parker Porsche that not only had to repaired after a testing accident but also recovered from the Club gravel during the session. Jones split the Class One field in the closing minutes, demoting the Intersport Mosler shared by Kevin Clarke, Wayne Gibson and BTCC start Andrew Jordan to seventh

Tom and James Webb were fastest in Class Three, eighth fastest overall in the GTS Motorsport BMW M3 CSL. Tommy Field and Chris Hart were ninth quickest in the Class Two Chevron GR8 with BPM Racing – a team that inlcudes Jordan’s BTCC teammate Jeff Smith – tenth fastest after they have been the early pace setters in the session in the Megane Trophy