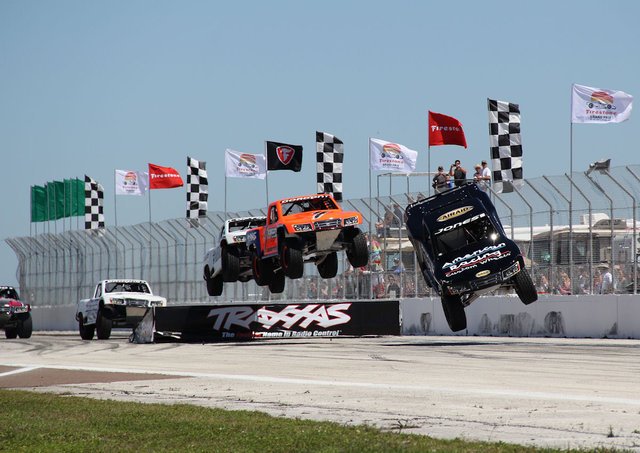 PJ Jones managed to keep Robby Gordon behind him on the closing lap of the second SPEED Energy Formula Off-Road Presented by Traxxas race at the Grand Prix of St. Petersburg to beat the series founder by the length of his truck.

With the first race fought in wet conditions, competitors enjoyed clear blue Florida skies on the second day with Jones looking to make up lost ground after finishing in a lowly seventh in the opening round following a costly mistake.

Jones started the race in sixth place but drove an strong race with a hint of aggression to move his way to the front of the field and hold on for victory.

With Jones and Gordon taking the top-two podium spots, third place fell to Jerret Brooks who proved his consistency after finishing second in the first race.

“We had a really fast truck and kept our mistakes to a minimum, but you do make mistakes in these trucks,” said Jones.

“Robby and Jerett got racing each other behind me which helped, and I had to hold Robby off when he made a couple of late dives on me on that last lap.

Jones added that the crowd helped motivate him throughout the weekend and was impressed with the level of support.

“Best thing is that the crowd was really into it and people have been coming up to me all weekend saying how much they love the trucks and love watching them jump.  A lot of them said we were the reason they came here this weekend and can’t wait to see us race again.  The fans that didn’t know about us already are fans now, I’m sure.”

Round 3 of the SPEED Energy Formula Off-Road Presented by Traxxas will be April 13 at the Long Beach Grand Prix in Southern California.