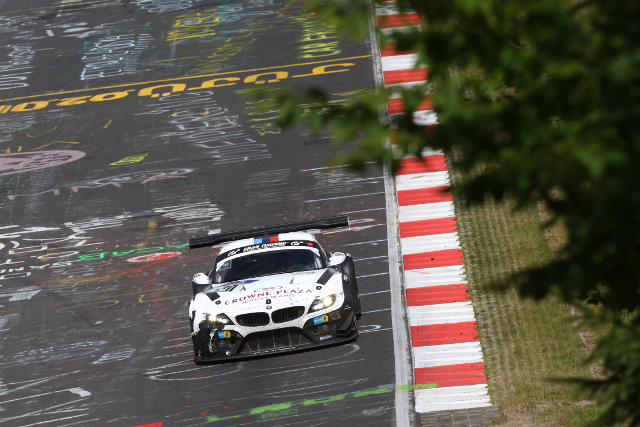 The best of the BMW Z4 GT3 entered for the ADAC Zurich Nurburgring 24 Hours finished sixth, after a dramatic race left all of the BMW Sport Trophy Team cars fighting problems.

The sixth place went to the team of Dominik Baumann, Claudia Hurtgen, Martin Tomczyk and Jens Klingmann. The quartet, in the #20 Team Schubert car were part of a fantastic three way battle with the leading Audi and Mercedes teams, taking the lead on several occasions during the first half of the race.

Baumann became one of the stars of the race, passing the #1 Mercedes around the outside of some slower traffic at Aremburg to take second place and take up the chase of the #4 Audi that would emerge as the eventual winner.

However, a penalty for avoidable contact with a slower car pushed them back out of the battle for the lead before a spin under braking resulted in a bent tie-rod, which needed a time consuming repair, the team having to remove the floor of the car to replace the part in the pits. Baumann took the final stint in the car, trying to return the team to the top five overall. Though he was able to catch the fifth placed Aston Martin in the final laps Baumann’s efforts to take the position where thwarted by slower traffic blocking his path on two crucial occasions.

“The closing phase was exciting,” said Baumann. “I tried to get everything out of the car. Our car was good to drive, although we had just replaced the tie rod. It was also getting quite warm for the tyres. However, I discussed it with the team and we decided I should go on the attack again and try to gain the odd position. It was a nice stint, but I am glad to be at the finish and that it is over. It was a tough race and, unfortunately, there were a few incidents that cost us a top result. As far as speed and durability are concerned, we could have won the race.”

“They had to abandon any hope of a podium following a pit stop for repairs two hours before the end of the race, and eventually came home in sixth place,” said BMW Motorsport Director Jens Marquardt of the #20 team. “Prior to this, the other BMW Z4 GT3 of our BMW Sports Trophy teams had been involved in crashes and had to retire. That shows how ruthless this race has been again this year. Because of this, we are all the more delighted that the Walkenhorst Motorsport team managed to claim a top-ten finish, bringing its number 28 BMW Z4 GT3 home in eighth place.”

The Dunlop shod Walkenhorst team (Ferdinand Stuck, Max Sandritter, Christopher Brück and Dennis Rostek) added their BMW to the top ten, having run consistently through the 24 hours, picking up places other teams were delayed – or worse – by problems.

“We wanted to finish in the top ten – and we did precisely that, coming home eighth,” said Sandritter. “We never expected to be the second best BMW. The BMW Z4 GT3 ran without any issues, and the team did an outstanding job. It was my first 24-hour race in a GT3 car, and I made it through to the finish at the first attempt – awesome.”

The #19 Team Schubert car and both of the Marc VDS run Z4 GT3 were among those taken out of the race by accidents around the famously testing Nordschleife track.

The #19 was put out of the race before darkness fell on Saturday night, retiring as a result of suspension damage after just four hours of racing.

The Marc VDS team, which had finished as runners up in last year’s Nurburgring 24 as well as winning April’s Qualifying Race, began the race as BMW’s highest placed representatives. However, their problems began early with Maxime Martin spinning the #25 out of second place on oil after only a few laps.

A precautionary pitstop would drop the car down the order, passing the Marc VDS torch to the #26 entry, the car briefly taking the lead before throttle problems dropped them back down the order. Worse, though was to come as both of the team’s cars were forced to retire after separate accidents during the night.

The BMW Motorsport entered BMW 235i Racing completed the race, though with only three drivers (Marcus Schurig, Jethro Bovingdon and former MotoGP rider Alex Hofmann) after BMW development driver Alex Mies was excluded from the race after the race organisers deemed him not to have heeded flag signals resulting in an incident where a marshal had to leap over the barriers to avoid the #235 entry, suffering leg injuries which necessitated him being taken to hospital.

“I am very sorry about this incident,” said Mies. “I did not see the yellow flag and so did not slow down sufficiently. That was my mistake, and I apologise. I wish the marshal all the best for a speedy recovery.”

The Adrenalin Motorsport team of Daniel Zils, Norbert Fischer, Uwe Ebertz and Timo Schupp dominated the Cup class for the 235i Racing not only taking the class win in 29th overall but picking maximum points for lead through the six, 12 and 18 hour marks during the race.