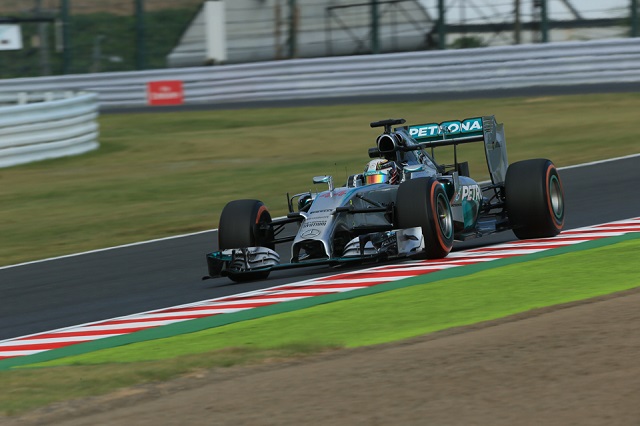 Rosberg topped the morning’s opening salvo, while Hamilton took over in free practice two that turned into a crash-fest after Kamui Kobayashi, Daniel Ricciardo and Esteban Gutierrez all ended their sessions in the Suzuka barriers.

In an unremarkable FP1, Rosberg set a best time of 1:35.461s to beat his team-mate by 0.151s, while Fernando Alonso was the only driver to get within a second of the Mercedes, putting his Ferrari third albeit 0.576s adrift of the sessions fastest time.

Valtteri Bottas was fourth fastest for the Williams Martini Racing team ahead of Kimi Raikkonen in the second Ferrari, while Kevin Magnussen was the fastest of the two McLaren drivers in sixth. Ricciardo and Sebastian Vettel were seventh and ninth for Infiniti Red Bull Racing, separated by the second McLaren of Jenson Button, while Daniil Kvyat was tenth for Scuderia Toro Rosso.

Many peoples focus however was not on the battle at the front but the arrival into Formula 1 of the youngest driver in F1 history Max Verstappen, with the seventeen-year-old making his first appearance in a practice session for Toro Rosso, replacing Jean-Eric Vergne, the driver he replaces in the team in 2015.

Verstappen set the twelfth fastest time of the session, running twenty-two laps and managed to set a lap time within half a second of team-mate Kvyat before an engine failure ended his session ten minutes early. The Dutchman took to F1 remarkably well, but will be disappointed to see his session cut short by a mechanical issue.

The only other noteworthy action in the opening session was a spin for Roberto Merhi, also just running in FP1 this weekend for Caterham, with the Spaniard losing control of his car on the exit of the Spoon Curve and was narrowly missed by Bottas’ Williams, who had to lock-up to avoid the stationary Merhi.

The second session was far more interesting. Hamilton managed to get the best of Rosberg with a lap time of 1:35.078s, which was 0.240s clear of his German team-mate, but the pace of the Mercedes was electric, with Bottas third but 1.201s slower.

Button was fourth ahead of Vettel, with Raikkonen just ahead of Alonso in sixth. Magnussen was eighth ahead of Kvyat and Ricciardo.

Home hero Kobayashi, who had stepped out of the Caterham for Merhi in the morning, spun into the barriers at turn four early in the session, but he was the first of three drivers to do the exact same thing, albeit in different parts of the circuit.

Ricciardo was next to crash, with the Red Bull driver running wide and hitting the barriers at the final corner that saw the session red flagged momentarily as the car was cleared up. This spell also helped the Toro Rosso of Vergne to be returned to the pits after the Frenchman stopped out on track with another mechanical issue for that car.

Once the session restarted after an eight-minute delay, Esteban Gutierrez crashed his Sauber into the Spoon Curve barriers, ending his day early.

The session eventually came to an early conclusion as Vergne once again stopped on track, and with his car in a dangerous position, the session was red flagged.

By Nick Golding
1 Mins read
It was not the home grand prix Aston Martin were hoping for with Lance Stroll being the only Aston Martin in the points in eighth after Sebastian Vettel was forced to retire.
Formula 1

By Nick Golding
2 Mins read
Lance Stroll was the star driver for Aston Martin at the British Grand Prix, after making up six places from his starting spot to finish in eighth. Sebastian Vettel retired with cooling issues.
Formula 1

"It was a very well-managed race" - Alpine's Marcin Budkowski

By Nick Golding
1 Mins read
The Alpine F1 Team had a much needed double points finish at the British Grand Prix, after Fernando Alonso and Esteban Ocon finished seventh and ninth respectively.