Artur Janosz: “My expectation is to improve race by race” 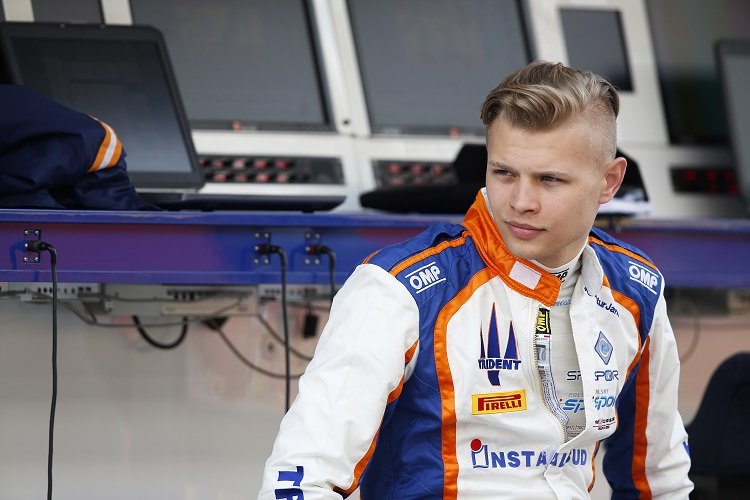 Artur Janosz is competing in his first season of the GP3 Series in 2015 with Trident Racing, with the Polish driver hoping to show his pace and have a strong, points-laden season with the Italian team.

Janosz moved up from finishing as runner-up in the EuroFormula Open championship with the RP Motorsport team in 2014 to race in GP3, with the twenty-two-year-old revealing in an exclusive interview with The Checkered Flag that he started his motorsport career relatively late at the age of fourteen.

“I’ve loved motorsport since I was a child,” revealed Janosz. “[But] I had not had anybody around to show me the world of motorsport, therefore I started to race very late; I was 14 years old.

“I spent four years in karting and moved to EuroFormula Open in 2013. In 2014 I was second overall doing my second season in single seaters.

“The season spent with RP Motorsport was fantastic. I like to work with Italian teams. I had a very good support from the team and worked hard along with my team-mate Sandy Stuvik and our engineer and learnt a lot.

“In 2014 we won the constructors’ championship and the driver’s championship so it was really strong year for the team and for myself.”

Janosz feels that moving into the GP3 Series in 2015 proves that his career is heading in the right direction, and is happy that his main rivals from 2014 in EuroFormula Open Sandy Stuvik and Alex Palou are also in GP3 this year.

“I try to make big steps every year and my coming to GP3 proves that my career is developing to the right direction,” said Janosz. “I think it was the right move.

“In EuroFormula Open during my second season I was fighting for the Championship. I improved qualifying performance and had very a good race rhythm. In GP3 all these things are important and you have to master them.

“I am happy that all three fastest drivers from EuroFormula Open 2014 season moved to the same series. It proves that my decision was right. Sandy and Alex are very fast drivers but we all need time to learn new things and gain experience.”

Janosz did not originally test for Trident in the post-Abu Dhabi tests of 2014, instead running with ART Grand Prix and Arden International, but the Pole revealed he was contacted by Trident manager and former GP2 Series racer Giacomo Ricci, who convinced him to drive for his team this year.

“First of all I and my manager decided to do three days of GP3 testing in Abu Dhabi but we did not do it with Trident,” said Janosz. “After testing, Trident manager Giacomo Ricci contacted us regarding the 2015 season.

“My manager knew Giacomo that is why it was easier to prepare the background for me to join the team.

“I was impressed with many things, not only one. I like the way the team communicate between the drivers and engineers as we all work to make the cars faster.

“We have also a big support from Giacomo who has an incredible experience and is a big help for driver like me. I feel supported by all within the team what is important for me as a rookie driver.”

Janosz felt that the 2015 pre-season testing with Trident was not easy, but felt it was positive as he learned more about the GP3 car and the Pirelli tyres.

“The testing went well but it was not easy,” revealed Janosz. “We worked hard what helped me to improve and understand many things regarding the new car and new tyres.

“In GP3 the track time is limited so I am learning how to optimise my work efficiency outside the racecar with the team.”

Janosz made his GP3 race debut at the Circuit de Catalunya in May, and felt it was a positive weekend, despite finishing outside the top ten in both races. He admitted that he continued his learning of the Pirelli tyres in Spain, and feels that with a bit more confidence in qualifying he could begin to attack for points.

“My first race in Barcelona was a great experience for me,” said the Polish driver. “That was a real race weekend environment that showed me how the race weekend looks like and how to work having different weekend schedule comparing to my last years in motorsport.

“My race pace was very good but I still miss a few tenths during qualifying.

“I also learnt that I will work more with my engineer and the team this year rather than drive the car but I really like it.

“My expectation is to improve race by race and especially to be faster during qualifying. My goal is to finish all races in top eight.”

Janosz feels he can be competitive in GP3 this year, and feels this year is the most special of his career so far. He feels he has now mastered the characteristics of the Pirelli tyre, and hopes to show more competitiveness for the remainder of the season.

“Each season is important but this one is a special one,” said Janosz. “I made a big step moving to GP3 and I feel that I can be competitive. I really like Pirelli tyres especially during the race.

“I understood how to manage the tyres and I want to master this ability for the future races. I am sure that after I improve my qualifying pace I will be more competitive during the race.”