Oliver Rowland overcame the challenge of Matthieu Vaxiviere to secure the 2015 Formula Renault 3.5 Series, and thus become its last champion before Renault pull it’s backing from the championship.

Rowland and Vaxiviere were the two to be genuine championship contenders all year long, but it was the Briton who triumphed over the Frenchman at the end of the season.

Rowland won a record breaking eight races during the season, winning once at every venue except Monaco, and scored points in every race. The Fortec Motorsports driver, who had finished fourth in the championship in 2014, started the year amongst the favourites for the title, and ultimately was the driver to beat throughout 2015.

Of course there were other drivers who played their part in the season, with Jazeman Jaafar, Egor Orudzhev, Tio Ellinas and Nyck de Vries all finding themselves on the top step of the podium, but ultimately they were the supporting cast to Rowland and Vaxiviere.

The Race for the Prize

Whereas Rowland’s challenge for the championship was expected, not many people were thinking Vaxiviere would be his chief challenger throughout 2015.

The first sign of the Frenchman’s pace was seen in the opening qualifying session of the season at Motorland Aragon, when Vaxiviere secured his maiden series pole position, but a sluggish start saw him finish only fourth, with Rowland leading Jaafar to a Fortec Motorsports 1-2 finish with Dean Stoneman third. Ironically,

Meindert van Buuren saw the chequered flag first, but the Dutchman, team-mate to Vaxiviere, was penalised for a jump start that saw him relegated to fifth. Van Buuren had contributed to Vaxiviere’s bad start by pushing the Frenchman wide at the first corner!

Vaxiviere made amends for his race one effort in the second race of the weekend, securing his first victory with a last lap pass on Nyck de Vries in a race affected heavily by the weather, with the DAMS driver not defending his position robustly enough heading into the penultimate corner, while Rowland secured the third position on the podium.

Vaxiviere returned to Monaco, the scene of his backbreaking crash in 2014, but suffered his only retirement of the season when he was involved in a first corner crash, leaving Jaafar to secure his maiden victory and assume the championship lead, with Rowland only sixth behind Dean Stoneman, Tom Dillmann, Orudzhev and Pietro Fantin.

Vaxiviere returned to the top step of the podium in the opening race of the weekend at Spa-Francorchamps with Rowland only fifth, before the British driver secured his second victory of the season in race two ahead of de Vries and Vaxiviere.

Orudzhev secured his own maiden victory in race one at the Hungaroring, with Roberto Merhi finding a way passed Rowland for second on the final lap for Pons Racing’s best result of the season.

Rowland and Vaxiviere were the stars of the field in race two, with the Briton coming out on top ahead of the Frenchman, with Gustav Malja securing his maiden podium in third for Strakka Racing.

The Red Bull Ring saw Rowland secure win number four of the season in race one, but Merhi was disqualified from second place after being found guilty of dangerous driving after slowing significantly just beyond the finish line and causing a crash with Nicholas Latifi, with Stoneman being promoted to second as a result and de Vries to third, while Vaxiviere could only muster sixth.

Race two saw Vaxiviere secured victory in race two ahead of Rowland, while Roy Nissany secured his maiden podium finish and Tech 1 Racing’s only visit to the top three all season.

Ellinas took his first victory of the season in race one at Silverstone, the home event for his Strakka Racing team, while Rowland and Vaxiviere filled the podium, while race two saw Rowland on top after a good battle with Vaxiviere, while Fantin secured a podium finish for International Draco Racing.

Win number six for Rowland was secured in the opening race of the Nurburgring weekend, with de Vries and Jaafar on the podium, while the weather contributed to a crazy second race, with Ellinas leading Mallya to a Strakka Racing 1-2, with de Vries again on the podium. Vaxiviere could only finish fourth in race one, while Rowland beat the Frenchman to the final point in tenth during race two.

Rowland moved to the verge of the title in race one around the Bugatti circuit at Le Mans, with Vaxiviere being penalised for track limits offences, relegated the Frenchman from a podium finish to tenth, with Orudzhev and Dillmann completing the top three, while the title was won in race two despite Rowland only finishing eighth – Orudzhev secured his second victory of the season ahead of Vaxiviere and Ellinas, which was enough to give Rowland an unassailable lead.

With the title won, Rowland headed to Jerez hopeful of completing a double victory for the first time, but was only able to secure one victory in race one, ahead of Orudzhev and Vaxiviere, while de Vries secured his maiden victory in terrific fashion in race two, confirming himself into third in the championship, while Rowland and Vaxiviere completed the final podium of the Renault era.

The Best of the Rest

Whereas all eyes were on the championship battle, a number of drivers excelled in the series in 2015, with the battle for third going down to the final race of the year.

Nyck de Vries secured the spot with his maiden victory in DAMS’ final race in the series before departing to join the GP3 Series, with Ellinas denying Orudzhev fourth by just two points, with Stoneman a further three points back in sixth.

Tom Dillmann was also in contention, but despite securing pole position in race one at Jerez was out of luck, suffering first a puncture and then a retirement. His sixth place in race two however was enough to see him finish four points clear of Jazeman Jaafar.

Podium finishes for Gustav Malja and Pietro Fantin saw them finish inside the top ten in the championship, although Fantin left International Draco Racing after the weekend at the Nurburgring.

Yu Kanamaru made his series debut at the Nurburgring for Pons Racing, and almost immediately showed good pace, with the Japanese racer able to secure two points finishes in his six starts, while both Nick Yelloly and Marlon Stockinger returned to the series mid-season at Lotus in place of Van Buuren, who fell out with the squad after the race weekend in Austria. 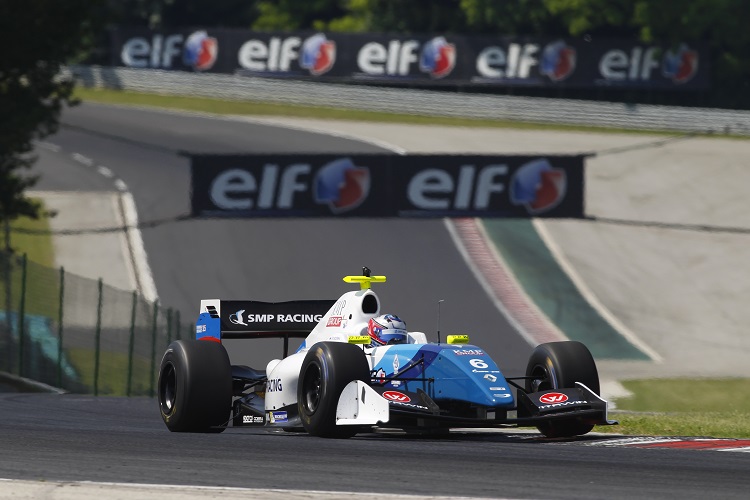 What next for the Series?

2016 will see a big change for the championship, with Renault having withdrawn its backing for the series, with the series being renamed Formula 3.5 V8 as a result, with Jaime Alguersuari Snr’s RPM Racing now taking sole responsibility for the series from 2016.

The championship will not see the return of former championship-winning team DAMS, who have withdrawn, but all the other teams who raced in 2015, including Comtec Racing who raced only at the Red Bull Ring with Louis Deletraz, while three new teams arrive – RP Motorsport, Spirit of Race and Teo Martin Motorsport.

The one-off race at Monaco has gone from the calendar as a result, with a completely re-profiled calendar being announced that will support primarily the International GT Open rather than the World Series by Renault promotion.