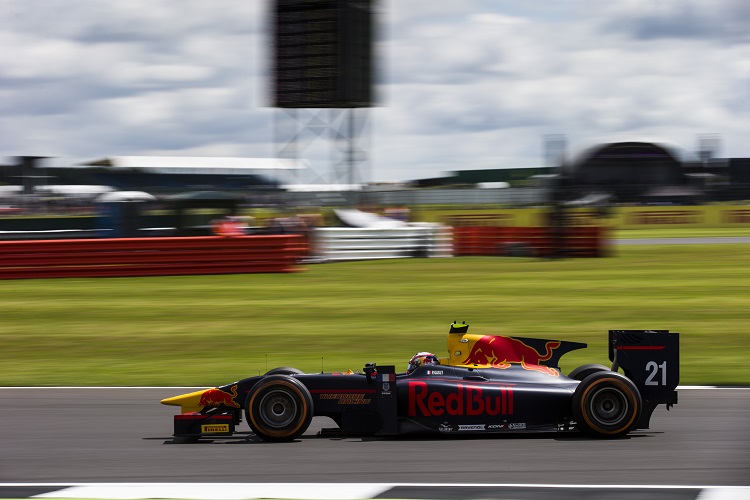 Pierre Gasly finally took his maiden GP2 Series victory after a strong drive on the right pit strategy enabling him to lead a Prema Racing 1-2 in the Feature race at Silverstone on Saturday.

The Frenchman started on the front row on the softer of the two tyre compounds available, and made his mandatory pit stop on lap seven to switch to the harder compound, and then drove strongly to move into contention.

He took over at the front of the field when those who started on the harder compound made their stops, and eventually crossed the line to secure his first victory in the series.

Antonio Giovinazzi made it a Prema 1-2, the second time in their rookie season that the team have finished first and second, with the Italian robbing Oliver Rowland of second place with an excellent move around the outside of Luffield corner on the final lap.

The MP Motorsport driver completed the podium despite being under investigation for track limit offences, but the top three took the correct gamble to take the start on the softer tyres, whereas fourth placed Mitch Evans started on the harder tyres.

The Campos Racing driver was one of the stars of the final phase of the race however, making a number of moves, the last of which was on the Trident of Luca Ghiotto, who had driven an amazing race of his own having started twenty-first after an engine issue during qualifying.

Ghiotto held off ART Grand Prix’s Nobuharu Matsushita at the end of the race, with the Japanese racer securing sixth, while pole sitter Norman Nato, who led the majority of the race but started on the harder tyre, could only finish seventh for Racing Engineering after making his pit stop, just ahead of team-mate Jordan King.

Pre-race championship leader Raffaele Marciello was another to lose out by starting on the harder tyre, with the Russian Time driver making his pit stop with the front left tyre showing through to the canvas, while his team-mate Artem Markelov will be left to rue a slow pit stop having been one of the stars of the race, making a number of impressive overtakes before dropping down to tenth after the stops.

Nicholas Latifi was running inside the top three early in the race but dropped outside of the points due to his strategy call to eleventh, while his DAMS team-mate Alex Lynn was never in points contention, finishing down in sixteenth.