Fernando Alonso: “I’m disappointed not to finish the race” 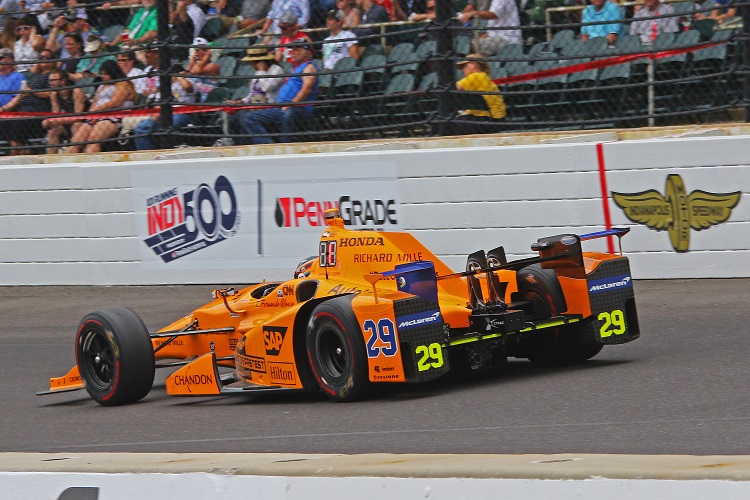 Fernando Alonso was in contention for the win in Indianapolis before his engine failed - Credit: Mike Harding / IndyCar

Fernando Alonso looked right at home driving around the Indianapolis Motor Speedway on Sunday but was unfortunately the recipient of a Honda engine failure with just twenty-one laps to go.

The Spaniard had led twenty-seven laps of his first Indianapolis 500 and was in contention for a top ten result, possibly even better, but for his engine failure, which was the third of the afternoon for Honda after Ryan Hunter-Reay and Charlie Kimball.

Alonso came to Indianapolis wanting to prove to himself if he could match the best of the Verizon IndyCar Series field, and by leading the race, he felt that he achieved this with his McLaren Honda Andretti team.

“I’m disappointed not to finish the race because obviously, every race you compete in, you want to be at the chequered flag,” said Alonso. “Today that was not possible.

Seeing his number on top of the pylon gave Alonso a thrill, and he admitted he wanted a picture of that for his home, but more than that, he admitted his pride to have participated in the Indianapolis 500.

“It was nice to have this competitive feeling, even leading the Indy 500, you know,” said Alonso. “One lap you put on the lead there, it was already a nice feeling. I was passing, watching the tower, saw the 29 on top of it. I was thinking at that moment if Zak (Brown) or someone from the team was taking a picture, because I want that picture at home.

“Thanks to IndyCar, amazing experience. Thanks to Indianapolis. Thanks to the fans. I felt at home. I’m not American, but I felt really proud to race here.”

Alonso admitted he was cheering on team-mate Takuma Sato in the closing laps as he closed on the victory, and he praised the Japanese racer for giving him some assistance during the month of May.

“The last two laps I was on my knees really pushing Sato. Extremely happy for the final result.”

By Griffin Schmoyer
2 Mins read
A.J. Foyt Enterprises announces the signing of Tatiana Calderón to race a road and street course program for the team in 2022, the first woman to drive for the team in their history.
IndyCar

By Justin Nguyen
1 Mins read
Conor Daly will run the full IndyCar season for the third straight year. This time, however, it will be as a full-time driver for Ed Carpenter Racing.