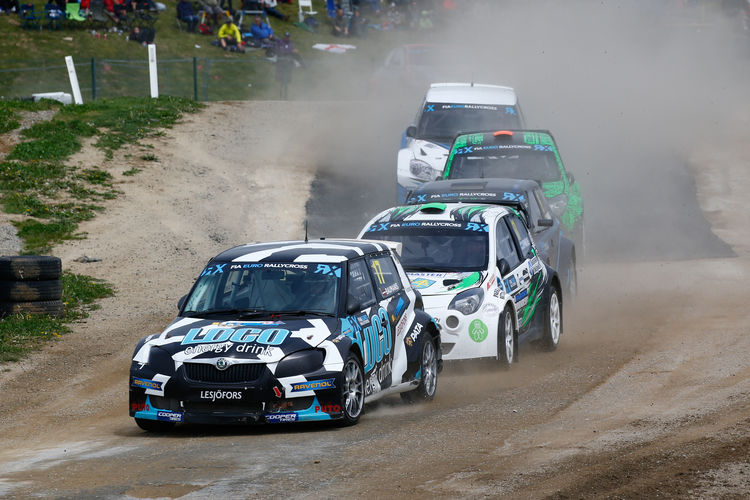 After his win in the first round at Portugal, Ulrik Linnemann led the Super1600 Drivers Championship with an aim to extend that lead over the weekend. However it would be Volland Racing‘s Artis Baumanis who dominated the running in Belgium as he emerged as Top Qualifier.

The Latvian driver won Semi-Final One to start on pole position for the Final. The grid for the Final saw Baumanis on pole with Linnemann alongside him. The Middle row had Kasparas Navickas and Set Promotion’s Jussi-Petteri Leppihalme whilst Janno Ligur and Timur Shigaboutdinov completed the grid.

Baumanis led the race until he crashed into the tyre barrier on the outside of the first corner on lap four and later rolled his Skoda Fabia in the joker lap section on the same lap.

Janno Ligur just missed out on the win after the race was red-flagged. Credit: Steve White / Fueltopia

Ligur took the lead at this point but the race was stopped and as Ligur hadn’t taken his joker lap, the organisers added the expected joker time due to the race being stopped. As the results were finalised this handed victory to Navickas.

Leppihalme survived contact with Baumanis after his first crash on lap four to finish third and take his first podium of the year. Shigaboutdinov was the last of the cars running as he came in fourth place.

Linnemann, who had suffered a difficult qualifying but made it through to the Final, retired on lap three with mechanical problems. 2016 Champion Krisztián Szabo who scored a podium in Portugal, missed out on a spot in the Final after coming home fourth in Semi-Final One.

With two rounds complete, Navickas takes the lead of Super1600 Drivers Championship on fifty points with Linnemann now in second place a further five points back. Leppihalme and Baumanis are tied for third place whilst Szabo completes the top five.

Round three of the The 2017 FIA European Rallycross Championship for Super1600 takes place at the iconic “Carnival of Rallycross” at Holjes in Sweden on June 30 – July 2.

Star-Studded Line Up For Euro RX Opener In Hungary

Marklund Teams Up With SET Promotion