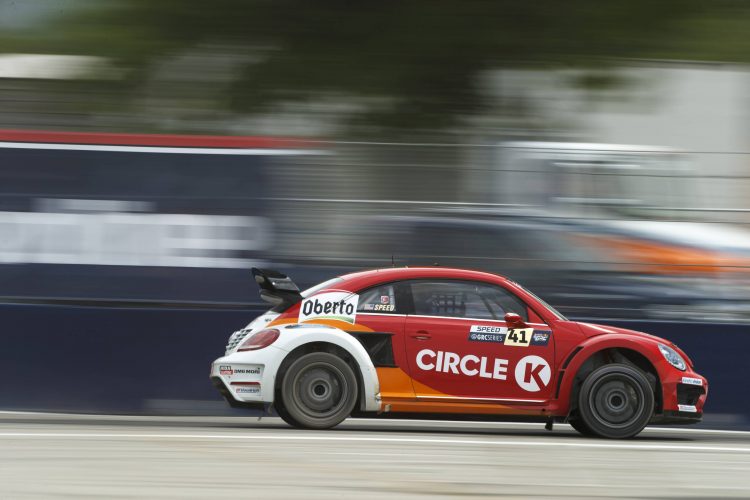 The reigning double champion passed Patrik Sandell in the closing stages of the race to retake the championship lead. His team mate Tanner Foust meanwhile, slipped to second in the points after a disastrous event.

The Vokswagen Andretti Rallycross pair swept the semi finals for the sixth time in this season but collided in the first turn of the final, with Speed forcing Foust wide. That allowed Sandell and Sebastian Eriksson to sneak through. Speed meanwhile recovered and held off Steve Arpin for third and set his sights on the leaders.

Foust was shuffled to the back of the pack, but pulled off course a couple of turns later, retiring from the race.

With Eriksson choosing the use his joker on the second lap, Speed resisted, using it at the halfway point to get by the Olsbergs Honda driver. That allowed him to spend the second half of the race to close in on race leader Sandell.

With three laps to go Speed was right on the back of Sandell’s Subaru, and on lap nine of the 10 lap race the pair made contact in the dirt section. Speed’s tidier driving style as opposed to Sandell’s rally-derived technique proved to be an advantage, allowing him to pass on the inside as they headed towards the jump.

Over the jump, Sandell was able to put his nose in front, before Speed reclaimed the lead once again upon landing. This time there was no looking back, as the Volkswagen Beetle‘s superior straight line speed advantage helped Speed pull away on the final lap.

Speed’s win, his 14th points-paying victory in Red Bull GRC, also allowed him to reclaim the all-time wins record from Foust. Sandell’s second place finish was his best result of what has been a trying first year with Subaru.

Third place went to Steve Arpin, who worked his way through the field, passing Sebastian Eriksson late on for the final podium spot.

Mitchell deJong recovered from the back row of the gird to complete the top five, finishing ahead of Oliver Erikson in the third Honda Civic. Austin Dyne was the finial finisher in seventh, while Cabot Bigham and Chris Atkinson joined Foust in failing to make the finish.

Speed now holds a slender seven point advantage over Foust, while Arpin sits 18 points behind the leader and remains the only realistic non-Volkswagen driver in the championship fight. Sebastian Eriksson’s fourth place finish helped him leapfrog team mate deJong for fourth in the points.