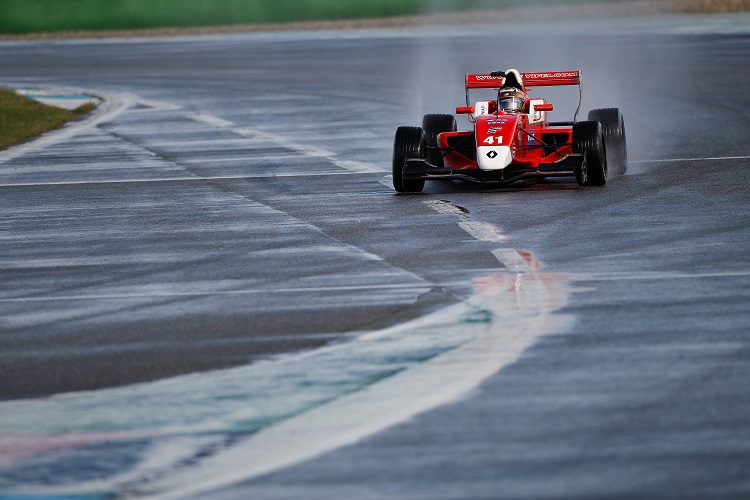 Yifei Ye will start both races of the season finale of the Formula Renault 2.0 Northern European Cup from pole position after coming out on top of a wet qualifying session at the Hockenheimring on Friday.

The Josef Kaufmann Racing driver secured the pole double ahead of team-mate Sacha Fenestraz, with the Chinese driver securing his first poles in Formula Renault ahead of the double race winner from the Nurburgring last month.

In the first qualifying session, Ye set the best time of 1:54.753s to take pole, 0.330 seconds ahead of Fenestraz, while Richard Verschoor was third for MP Motorsport, just 0.003 seconds further back.

Gabriel Aubry, in with an outside chance of the title this weekend sitting forty-four points behind Gilles Magnus with sixth points available, will start fourth for Tech 1 Racing, ahead of MP Motorsport’s Jarno Opmeer and Josef Kaufmann Racing’s James Pull.

American racer Logan Sargeant will start seventh in his first ever Formula Renault race, with the British Formula 4 racer joining the R-ace GP team this weekend, with Aleksandr Vartanyan of Arden Motorsport joining him on the fourth row.

Charles Milesi, who took his first NEC win last time out at Spa-Francorchamps, will start ninth for R-ace GP ahead of another debutant, with Australian Oscar Piastri joining Arden Motorsport.

The much faster second session saw Ye set the fastest lap of 1:52.959s, 0.084 seconds ahead of Fenestraz, with Opmeer moving up to third ahead of Aubry and Verschoor.

Mirecki will start sixth ahead of Piastri and Benyahia, with Vartanyan and Sargeant rounding out the top ten ahead of Pull, Coicaud, Neubauer, Magnus and Milesi, with the latter stopping on track mid-way through the session.

Formula Renault 2.0 Northern European Cup Will Not Return in 2019

By Paul Hensby
2 Mins read
Max Fewtrell moved further ahead in the championship after taking victory in race two in Germany as long-time leader Christian Lundgaard was forced into retirement.