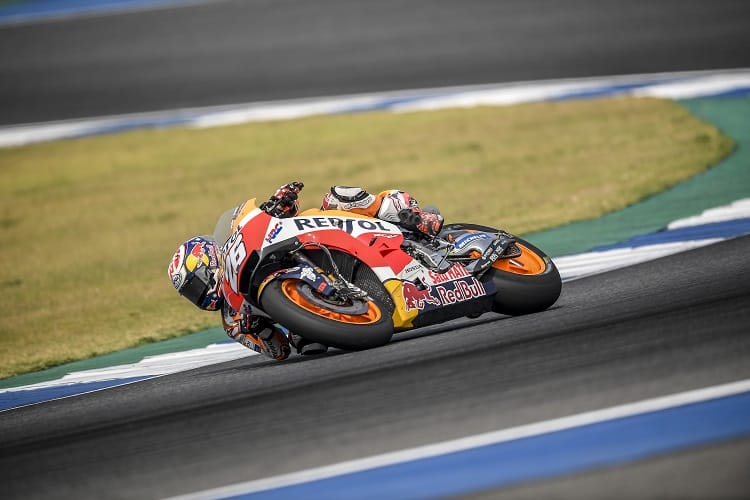 Dani Pedrosa left Buriram in positive mood as Honda topped all three days of the Thailand MotoGP test. The Spaniard set an unofficial track record on Sunday, 24 hours after seeing his team-mate Marc Marquez lead the way, with Honda appearing to have stolen a march on the competition with a month to go before the season opener.

Pedrosa has shown impressive pace throughout both winter tests, at Sepang and Buriram, and now hopes to confirm his and Honda’s competitiveness at next month’s final test at Losail.

“We leave Thailand with positive feelings. The test was quite tough as the temperatures were high, and we worked really hard over the three days. In the end we didn’t have many tyres left, so we had to carefully manage the planning of our work. We worked on many aspects of the bike’s setup, and step-by-step we improved our speed and pace. Among other things, today we tested a carbon swing arm that’s a new area for us to work on, so we’re still in the process of learning and of finding the feeling. I’m very happy with the job my team is doing at the track, and with what the engineers are doing back in Japan. They’re really helping us to improve, and this is good and gives us confidence. Hopefully we’ll be able to continue this trend at the final test in Qatar, which will be very interesting as conditions will be different.”

Just as he had at Sepang, Marquez showed ominously consistent pace without setting the ultimate headline lap times and the reigning champion, who was third fastest overall, was delighted with his long-run performance.

“I’m very, very happy with what we did today, as we completed many laps and were able to improve the bike’s setup in several areas. Our lap times today were slower than yesterday, but we worked differently and I didn’t push for a time attack. We completed a 20-lap long run with a strong pace, and I also felt good from a physical-conditioning point of view, which was very satisfying. Today we worked on some new things, including a carbon swing arm that we had actually already tried, so we were able to do some back-to-back tests. Of course we’re just starting our work on that, so we’re still in the phase where there are both positives and negatives and we need to understand it better. The new aerodynamics was quite positive, I liked it today. It requires a little bit different riding style, but I managed to be very consistent on used tyres with it so I’m happy about that as well.”