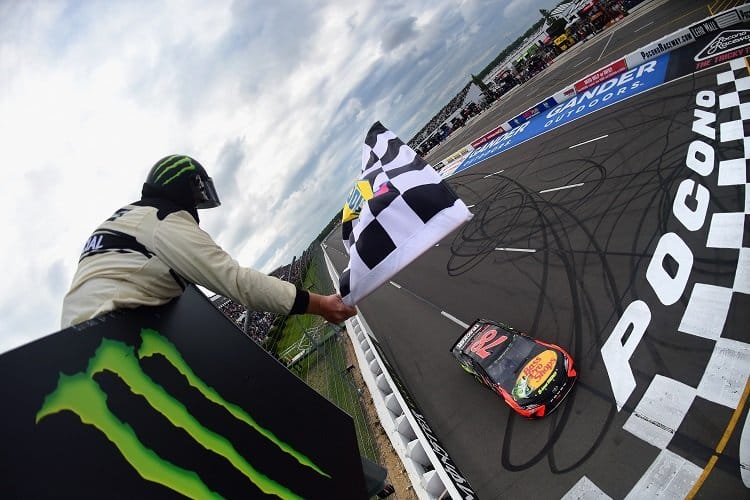 Martin Truex Jr. will be partying in the Poconos this week. The reigning Cup champion scored his first win since the Auto Club 400 in March as he held off Kyle Larson to win the Pocono 400 at Pocono Raceway.

Defending race winner Ryan Blaney started on the pole alongside Kevin Harvick. Blaney had a strong start to lead the race, while Kyle Busch quickly caught up and passed Harvick for second on lap six. However, Busch brushed the wall two laps later and lost the position back to Harvick; the #18 began to fall as Truex claimed third.

Harvick took the lead on lap 12 as Blaney suffered a drop of his own, falling to fourth by lap 13. Blaney pitted on lap 16 to begin the green flag stop cycle. Other drivers attempted various strategies, but the fuel window meant they had to pit before the end of Stage #1. Harvick pitted on lap 24 to give Jimmie Johnson the lead for two laps; it was the seven-time champion’s first laps led in 2018. Johnson hit pit road on lap 29 to cycle Brad Keselowski into first. Keselowski finished the cycle on lap 35 as Harvick became the leader once again.

Truex passed Harvick for the lead on lap 44. Five laps later, with two laps remaining until the end of Stage #1, Joey Logano‘s fuel strategy backfired as he ran out, forcing him to head to a closed pit road. At the front, Truex scored the stage win ahead of Harvick, Busch, Clint Bowyer, Denny Hamlin, Chase Elliott, Blaney, Kyle Larson, Johnson, and Keselowski.

Between stages, Keselowski took just two tires to become the leader for the start of Stage #2. Truex had a slow stop after his rear tire changer struggled to pull the left-side tire off the car as it was caught between the fender; he restarted fourteenth. 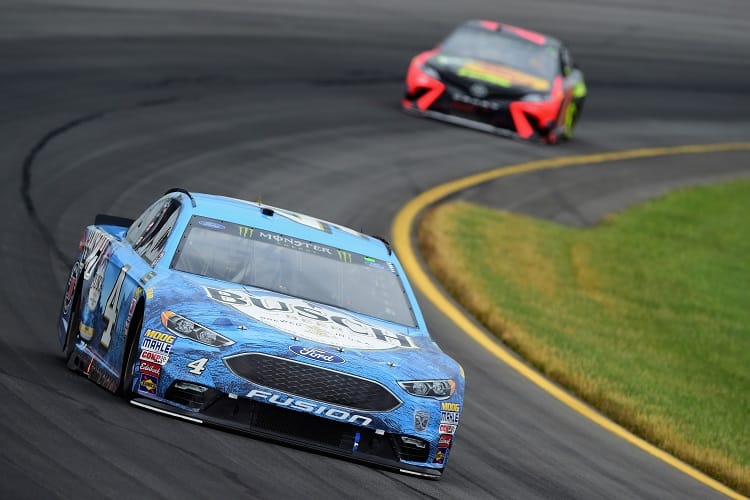 Stage #2 began on lap 56 as Keselowski and Harvick led the field to the green. Harvick, pushed by Keselowski’s Team Penske team-mate Blaney, quickly moved to the lead. After ten laps, Truex had moved up to ninth.

Keselowski pitted on lap 66, while Blaney and Harvick did so on laps 76 and 78, respectively. As the leaders pitted, Darrell Wallace Jr. inherited the top spot for his first laps led since the Food City 500 in April. Harvick reclaimed the lead on lap 83 as Wallace pitted three laps later, suffering a speeding penalty in the process.

Harvick’s stranglehold on the field continued until the green-checkered flag on lap 100 marked the end of Stage #2, recording his seventh stage win of the year. Behind Harvick were Busch, Bowyer, Truex, Elliott, Larson, Keselowski, Blaney, Johnson, and Alex Bowman.

Harvick remained the leader at the beginning of the final stage on lap 106, while Austin Dillon changed two tires to join him on the front row. After two laps, Wallace began reporting problems with his car, eventually retiring from the race with an engine failure; it is Wallace’s first DNF of the year. Matt DiBenedetto exited the race five laps later when his right front tire caught fire due to brake issues. On lap 120, Kasey Kahne joined the increasing list of DNFs as he experienced transmission problems.

On lap 124, Derrike Cope brought out the first incident-related caution when he was bumped by Larson in turn three. During the ensuing stops, Busch won the race off pit road ahead of Harvick. On the ensuing restart, Daniel Suárez suffered damage to his left rear, but continued. Truex took second from on the restart Harvick as Busch led, leading by nearly half a second when a caution for debris in turn one came out on lap 139.

Truex and Harvick stayed out, while Busch pitted. Blaney, Dillon, and Aric Almirola opted to take two tires, while Paul Menard was penalized for an uncontrolled tire.

The restart took place on lap 143 with Truex leading. Larson quickly jumped to second past Harvick. Three laps later, during a battle for eleventh, Hamlin bumped into Alex Bowman as they exited turn one; Bowman brushed the wall as Hamlin spun, taking him out of the race. Truex, Larson, Busch, and Harvick comprised the top two rows for the lap 150 green flag, but racing did not last long as Erik Jones was promptly hit from behind by Logano, causing the former to spin.

Another green flag waved with seven laps remaining. Truex retained the lead as Busch passed Harvick for third. Larson could not keep up with Truex, who led him by 2.496 seconds as he scored his seventeenth career Monster Energy NASCAR Cup Series win and second of 2018. Rounding out the top ten were Busch, Harvick, Keselowski, Blaney, Almirola, Johnson, Logano, and Elliott. Only eleven lead changes occurred among seven drivers, the fewest leader swaps in a Pocono race since the 1998 Pennsylvania 500, which saw just nine.

“You’re always concerned on restarts,” Truex stated in Victory Lane. “You just never know. So much can happen on those things. We were luckily able to get a good one.”

Other finishers of note include Cole Custer in twenty-sixth. Custer, a Stewart-Haas Racing development driver in the Xfinity Series and running his second career Cup race, scored Rick Ware Racing‘s first-ever lead-lap finish with his run.

Next week, the Cup Series travels to Michigan International Speedway for the FireKeepers Casino 400. Larson is the defending winner.

By Justin Nguyen
3 Mins read
NASCAR great-turned-IndyCar regular Jimmie Johnson will compete in the Race of Champions for the first time since 2007 for Team USA alongside Travis Pastrana.