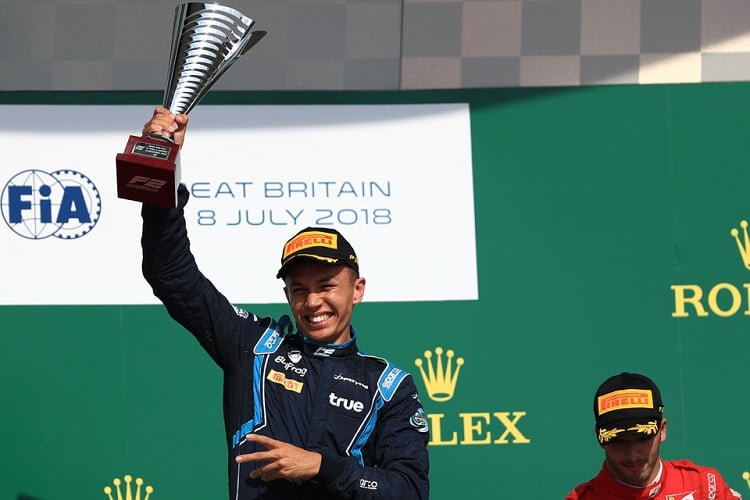 Alexander Albon was delighted to secure his second Feature race victory of the season at Silverstone on Saturday, with the Anglo-Thai racer capitalising on a slow pit stop from George Russell to triumph.

The DAMS racer had entered the pit lane behind his ART Grand Prix rival but came out ahead as Russell’s mechanics struggled with the attachment of his front left wheel, and from there on he was untroubled at the front of the field.

“It was quite clear for me on lap 2 that it’s a track where it’s very difficult to follow and it’s easy to overheat your tyres,” said Albon in the post-race press conference.  “We did go into the pits banking on that if we were to make a move, it would be there as the soft tyres were actually quite good.

“But then, we were very fortunate – George had an issue and my guys did a very good job, we were really fast and it’s been something we’ve been working on through the year. We realised it was something we needed to work on a little bit and every race we’ve been getting faster and faster.

“It was a race where my team made me win.”

Albon admitted that he had gone into the race knowing the degradation concerns that many drivers had were unfounded as both he and Russell had done some a long run in practice, and as a result he knew he could push on the tyres more than the majority of the field, who were left conserving their tyres unnecessarily.

“I think George and I were the only guys in free practice to do a long run and already by then, I knew that the tyres were going to be quite good,” said Albon.  “I heard other people talking about high deg, but I think I knew it wouldn’t be that bad.

“So with that information, I drove – pushing, but not killing the tyres, so I could relax. But I also saw that George was very quick, and he had the luxury that he could back off, cool the tyres down and go for fastest lap. I wanted to, but it was better to get the win than try to risk anything silly.”

Whereas he took victory on Saturday, Albon could do no better than eighth in the Sprint race on Sunday, with the Anglo-Thai driver unable to make the kind of gains that both Russell and Lando Norris did.  Russell and Norris started seventh and tenth respectively and climbed to the podium whereas Albon was left to rely on the retirement of Antonio Fuoco just to score a point.