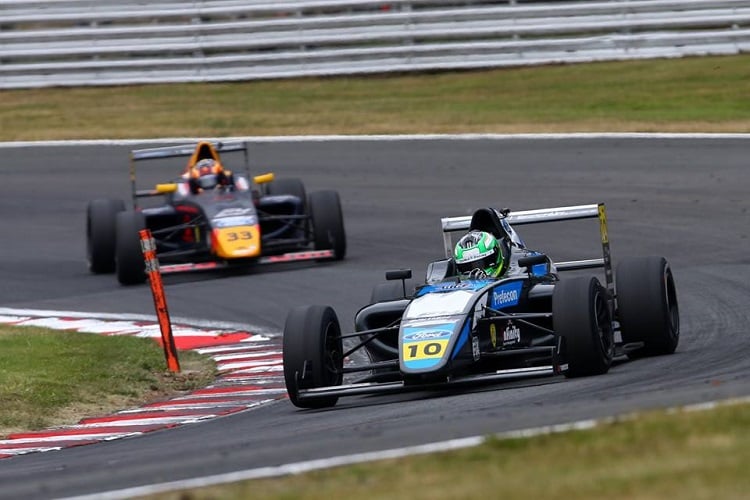 Paavo Tonteri claimed his first British Formula 4 victory in the second race of the weekend at Snetterton.

The Double R Racing driver snatched the lead from pole sitter Sebastian Alvarez off the line and was unchallenged through the remainder of the race.

Sebastian Priaulx, who moved up to second on the opening lap, tried to close the gap to the race leader, but Tonteri managed the distance and finished a comfortable 0.780s ahead of the Arden driver.

Ayrton Simmons began to catch Priaulx in the closing stages of the race, but the clock ticked to zero before the championship contender could make a move, and he had to settle for his second third place of the weekend.

Behind the leading trio, Jamie Sharp made a stunning start to climb up to fourth, just ahead of Jack Doohan. Doohan pushed Sharp hard and managed to find a way through, but a meatball flag for a damaged front wing forced him to come into the pits a handful of laps later and he dropped to the back of the field.

Kiren Jewiss, who had started from the back of the grid, wasted no time sitting behind Sharp. The championship leader continued his impressive recovery drive to take fourth, but was too far behind Simmons to challenge his championship rival for the victory.

The result meant Simmons closed the gap to Jewiss to 39 points ahead of the final race of the weekend.

Patrik Pasma also managed to pass Sharp before Sharp ran wide and dropped from sixth to P11. He was forced to come into the pits on the penultimate lap, bringing an end to what would have been his best race of the season to date.

Dennis Hauger, who was awarded a grid drop for driving unsafely in the opening race, was promoted to sixth, ahead of Josh Skelton and Jonathan Hoggard.

Alvarez dropped to ninth, with Luca Allen rounding out the top 10.

Ayrton Simmons Steps up to EuroFormula Open with Double R Racing in...

SEASON REVIEW: 2019 F4 British Championship – Maloney seals one of the...