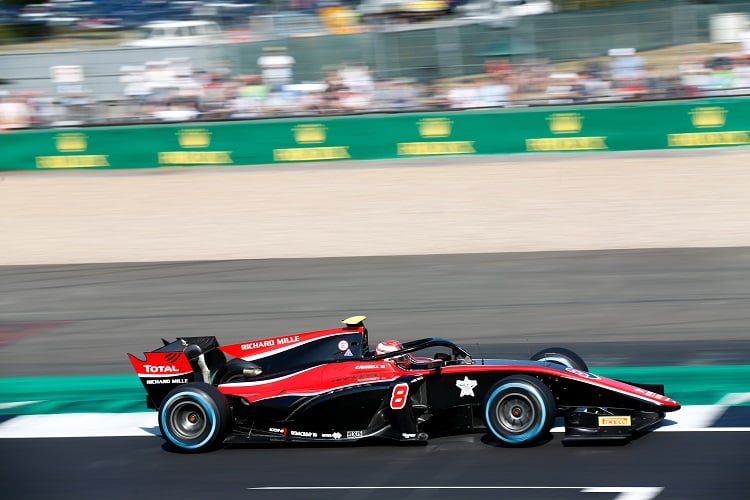 George Russell enjoyed his Sprint race at Silverstone as the Briton climbed from seventh on the grid to claim a third consecutive runners-up spot, although he ended up just over half a second short on the victory, which was taken by Maximilian Günther.

After losing victory to Alexander Albon in the Feature race on Saturday thanks to a slow pit stop, the ART Grand Prix driver was in great form again on Sunday, making good passes on Luca Ghiotto, Antonio Fuoco and Louis Delétraz to move up to fourth, before passing both Artem Markelov and Nyck de Vries to take second.

Russell had a significant pace advantage over Günther in the closing laps but ran out of time to put any pressure on the German for the victory, but he was happy to again show his skills in managing his tyres as others around him suffered.

The results at Silverstone means Russell heads to the Hungaroring at the end of the month with a thirty-seven point advantage at the top of the FIA Formula 2 Drivers’ Championship over compatriot Lando Norris.

“It was a great race, and I wanted to put on a little bit of a show for yesterday’s loss of the victory, you might say,” said Russell in the post-race press conference at Silverstone.  “I was looking after my tyres in the early stages before attacking quite hard after about six or seven laps.

“I had a really nice balance with the car, I felt really confident and I knew what I needed to do to save the tyres and we had great grip in the final stages – so that helped me to close the gap up to Maxi.

“The team were encouraging me to fight for the win, I thought they were joking, but I only finished half a second behind them. But it was a great race, congratulations to Maxi and also to Lando, who had a great race from P10.”

By Josh Disborough
4 Mins read
Mick Schumacher and Guanyu Zhou took home a win a piece in the Sochi round of the FIA Formula 2 Championship.
Formula 2

Yuki Tsunoda on pole by the smallest of margins