2018 Champion Jamie Bond: “We’ve Probably had the Worst Year Ever” 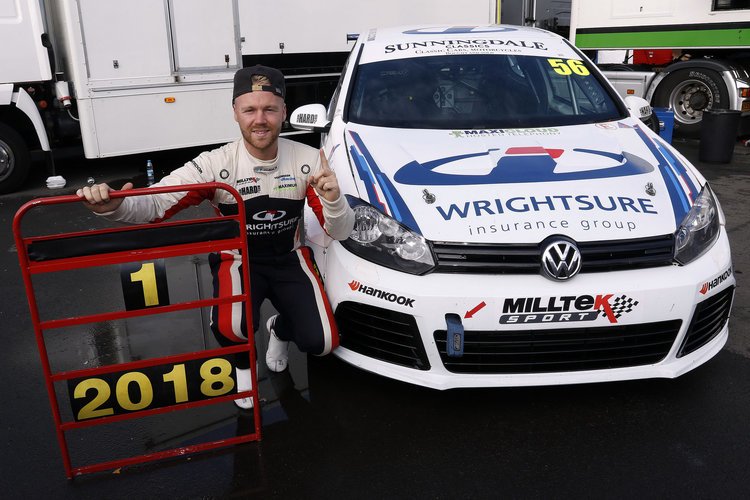 After the VW Racing Cup finale on Sunday, Jamie Bond leaped from his car, elated at the title that must have seemed to have slipped from his fingers after his steering went at the half-race point.

With two retirements from the first four races, you’d be mistaken to assume Bond was already out of the fight. The 24-year-old had other plans. Consistency and reliability for the remainder of the season slowly brought him back into the competition and as his rivals fell around him, it was the Team HARD. racer who was left on top going into the final round at Donington Park.

The weekend would not go as planned though. He’d come into the final round with a 52 point lead, but crossed the line on Sunday with only a 12 point advantage.

“We’ve dealt with loads of issues, not just the car. But everyone’s kept their head up, pushing on, and we’re here now 2018 champions!” said Bond, moment after stepping out of his Golf.

Qualifying had started well, lining up in front of his closest rival Ruaridh Clark, who needed a bout of luck in order to close the gap. He’d get exactly that come the first race as Bond slipped back from fifth.

“On Saturday with the gearbox problems, where we had no power or drive in the car, so we limped home in fifteenth and today (Sunday) we had no steering. I had to angle the cars into the corners, so I didn’t know where I was. All I had to do was keep it on the circuit.”

The weekend did go as planned for Bond, who suffered from gearbox and steering issues (Credit: VW Racing Cup)

The Wrightsure Insurance sponsored driver had been comfortably running in the top ten come a chilly Sunday morning, but with ten minutes to run, it almost slipped away from him with Clark running away in the lead.

“I’m over the moon. I just want to say thank you to Team HARD. Racing, Wrightsure Insurance, Oakleaf Heating, they’ve been the backbone of me and they deserve it as well, as much as me and the team, a great thank you to everyone.”

Despite his consistency, Bond had stood on the top step just once all season with his only 2018 win coming last time out at Croft, when the series supported the TCR UK package.

Perhaps as a result, Bond was surprisingly negative about how the year had gone.

“I don’t know about a great season, it’s over now. To be honest, we’ve probably had the worst year ever, but we’ve just been consistent.”

After catching his breath and letting his achievement set in, he responded again; “Don’t get me wrong, I’d have love more wins, more podiums, but overall, this is what matters.”

He becomes the second Team HARD. driver in a row to claim the crown after Bobby Thompson‘s success last season. As a result Thompson has spent 2018 racing for the team in the BTCC, but Bond was far more reserved about his progression. Though did not rule out a move away.

“I don’t know yet,” he said talking about his plans. “We’ll see what we can do with the team and the sponsors and see where we can go. We might be back, we might be somewhere else we just have to wait and see.”

Of the many mechanics and family members that embraced Jamie in the pit lane, it was Tony Gilham who seemed the proudest, having nurtured the Kent driver from debut to title.

“On our first scholarship competition we met Jamie,” said Gilham. “He’s a local lad, has amazing talent, as we’ve seen this year. He’s had a bit of bad luck, but he’s come through it, secured the championship.”

“This has been a tricky weekend for us, but he’s done what he needed to do. There’s several race winners, but you’ve only got one championship winner.”

Over the year, Bond has picked up six podiums, though closest rival Clark ended with just four during a season in which only Dennis Standberg won more than two races.

“We’ve ended on a high with the title, but on a weekend with a little bit of frustration with the car, as it had been really solid all year,” concluded Gilham. “He’s done what he needed to do, he drove well and we’ve got the job done.”

Browning joins Villagomez and Faria as Fortec look to make up for...