Johan Kristoffersson has equalled his own record for the number of wins in a World RX season after securing his seventh victory of the year in the 2018 World RX of France.

The PSRX Volkswagen Sweden driver didn’t have it all his own way though as he didn’t win in the Semi-Final stages and had to start from the middle row in the Supercar Final.

Until the final corner, it seemed that there might be a third winner in the 2018 FIA World Rallycross Championship.

Bakkerud held the lead of the race until the final corner, pushing hard for what would be second place. Credit: Flavien Duhamel/Red Bull Content Pool

Mattias Ekstrom and Andreas Bakkerud held an all EKS Audi Sport front row whilst Kristoffersson shared the middle row of the grid with Sebastien Loeb.

The Team Peugeot Total driver arguably gained the most places this weekend through on track overtakes, whilst Petter Solberg and Timmy Hansen occupied the back row.

Bakkerud beat Ekstrom off the line and the former DTM Champion fell in line behind his team-mate on the run down to the hairpin whilst Kristoffersson, Hansen, Solberg and Loeb fought it out behind them.

However the race would not be decided until the last corner.

Petter Solberg stepped onto the podium for the first time since Norway back in June. Credit: IMG / FIA World RX

Solberg blinked first and took his Joker on the first lap, followed by team-mate Kristoffersson who took his on the next lap. The order up front remained Bakkerud ahead of Ekstrom whilst Hansen stayed ahead of Loeb.

The Frenchman was the next man to take the Joker and by the end of lap three he would fall back to sixth place.

The strategy from EKS Audi Sport was to send both Bakkerud and Ekstrom into the Joker at the same time, however this would not work out in their favour.

Hansen followed the two Audi’s into the Joker and at the penultimate corner Kristoffersson just nipped ahead of Bakkerud and took the lead. 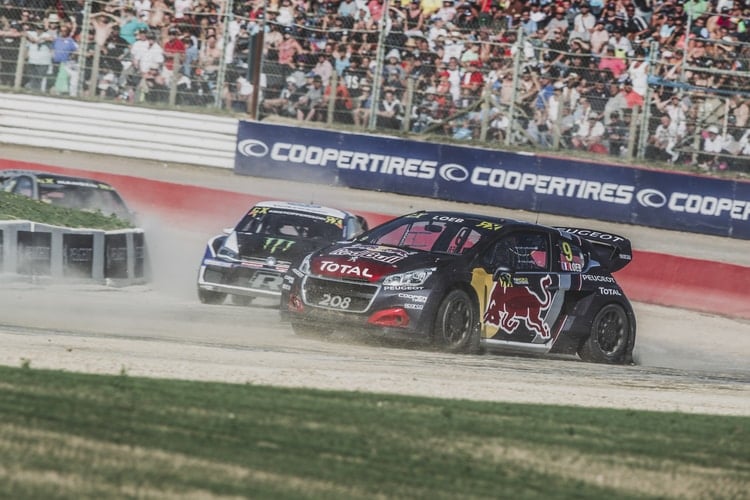 Loeb fought back in the Semi-Finals to secure his place in the Final but a home win eluded him. Credit: Flavien Duhamel/Red Bull Content Pool

Johan Kristoffersson took the win ahead of Andreas Bakkerud with Petter Solberg climbing to third place as Mattias Ekstrom settled for fourth position.

What looked like a possible home win for the two Team Peugeot Total drivers didn’t materialise with Timmy Hansen fifth ahead of Sebastien Loeb.

With four rounds of the 2018 FIA World Rallycross Championship left to go, Kristoffersson has a fifty-nine point lead of Bakkerud.

If he maintains the points gap then the PSRX Volkswagen Sweden driver could seal the title at the inaugural World RX of COTA at the end of this month.

By Ben Huntley
1 Mins read
The new all-electric era of WorldRX launched last night in Norway ahead of a thrilling weekend of motorsport in Hell.
FIA World Rallycross

By Ben Huntley
2 Mins read
After years of waiting, the electric era of the FIA World Rallycross Championship is finally ready to begin.