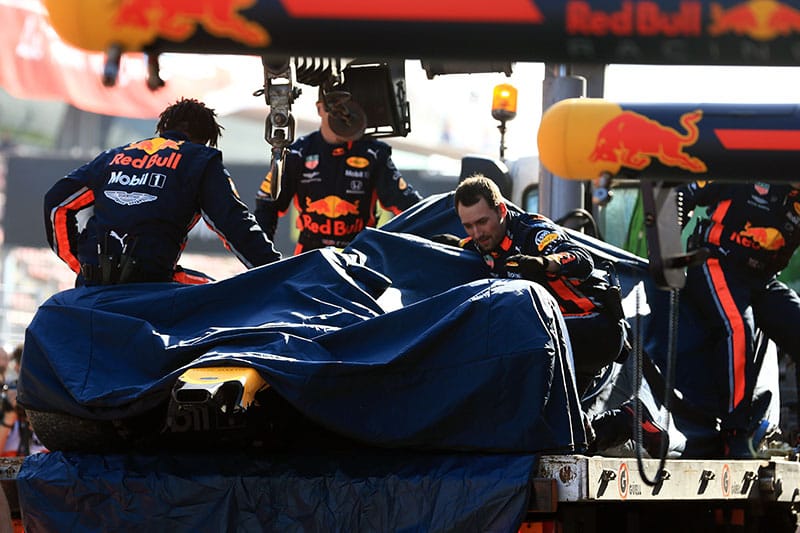 While Scuderia Ferrari‘s Charles Leclerc took the honours of being fastest driver of the day with his fastest lap of the morning session, a heavy crash from Red Bull Racing‘s Pierre Gasly was the story of the day in the penultimate test session before the 2019 FIA Formula 1 season gets underway in Melbourne.

Gasly had run the majority of the 65 laps completed on the C3 medium compound, along with a handful of laps on the soft C5 tyres before starting a long-run on harder C2 tyres. The Frenchman had only started his run on the harder compound when the accident happened at the fast Campsa right-hander.

As Gasly rounded Turn 9 he ran wide and lost control, the car spun and left the track backwards, skating over the gravel trap before being caught by the barriers. Both the front and rear wings were ripped off of the RB15, with what looked like heavy damage on the rear of the car. Following a visit to the medical centre the Frenchman was given the OK.

Leclerc’s fastest lap time of 1:16.231 set the benchmark for the day as he came within six tenths of Lewis Hamilton‘s 2018 Spanish Grand Prix pole time on the softest Pirelli tyre. 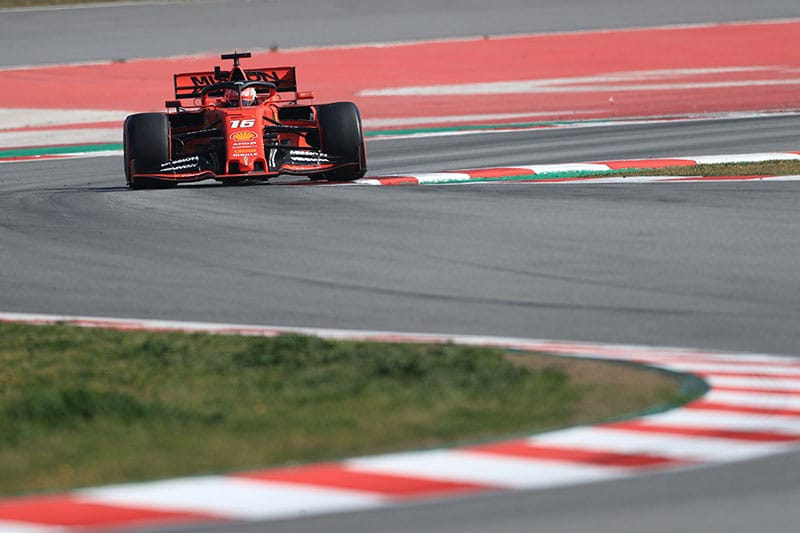 After completing a total of 138 laps, 56 in the morning and 82 in the afternoon, the Frenchman brought his day to an end with 20 minutes of the session remaining.

Early in the day it was Toro Rosso‘s Alexander Albon and McLaren F1 Team‘s Lando Norris that were setting the pace, swapping times throughout the session. Albon would end the day of the fastest, just over half a second slower than Leclerc with Norris two-tenths behind.

Gasly’s morning time of 1:17.091 was good enough to end the day in fourth place, despite his off, while Renault F1‘s Daniel Ricciardo and Nico Hulkenberg finished fifth and sixth.

Lance Stroll continued settling in with Racing Point F1 Team, recording a total of 103 laps throughout the day to finish seventh before his car came to a halt on the back straight with just over an hour remaining.

Alfa Romeo Racing‘s Antonio Giovinazzi recorded 71 laps, finishing ahead of Haas F1‘s Romain Grojean who lost track time due to an exhaust issue after Kevin Magnussen‘s morning run. Lewis Hamilton rounded out the top ten with a total of 85 laps.

After initial delays in getting the car to Barcelona, Williams Racing‘s George Russell recorded a total of 140 laps, the most of the thirteen drivers that took part to finish eleventh ahead of Kevin Magnussen and Valterri Bottas.

By Nick Golding
2 Mins read
Sebastian Vettel had a very positive opening day at the Sochi Autodrom ending the day in ninth, team-mate Lance Stroll was in a disappointing fifteenth.
Formula 1

"There's some graining on the front tyres" - Carlos Sainz Jr

By Nick Golding
1 Mins read
Leclerc to start from the back of the grid for the Russian Grand Prix after being fitted with an upgraded power unit. He ended the opening day tenth with Carlos Sainz Jr in seventh.
Formula 1

By Nick Golding
2 Mins read
Max Verstappen will start the Russian Grand Prix from the back of the grid after taking engine penalty for fourth engine unit. Verstappen ended the opening day in Sochi sixth with Pérez eleventh.