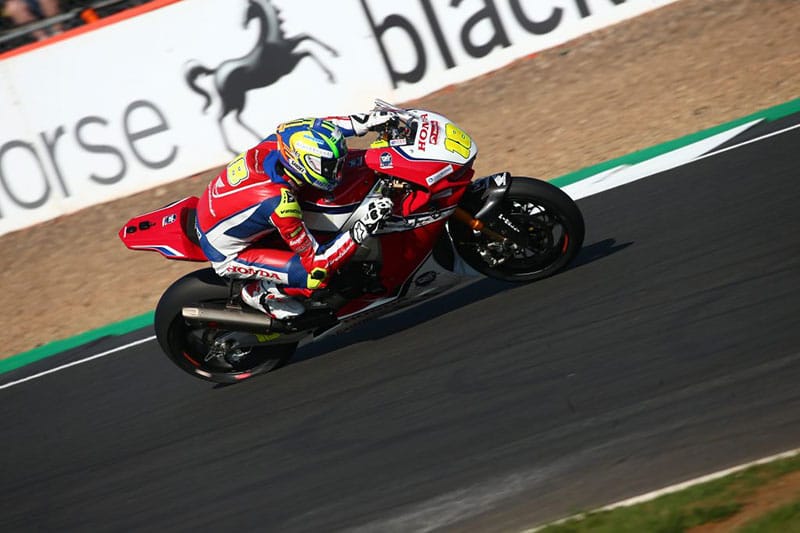 Andrew Irwin was pleased with his performance at Silverstone (Credit: Honda Racing)

Andrew Irwin believes that he has taken a step forward with his riding after a positive debut weekend with Honda Racing at Silverstone.

Irwin battled through to sixth in the opening race of the year, before taking seventh spot in race two. The result could have been even better for Irwin, but he was given a long lap penalty on lap 12 after clashing with Scott Redding. Irwin was fifth when he took to the penalty lane, rejoining the racing line down in eighth.

Despite that setback, Irwin was left feeling really positive about the opening round of the year:

“The races today have been really positive and I think from last year I have definitely taken a step forward in my riding, I put a lot of effort in over the winter and I think it is paying off. Sixth and seventh in the first weekend is positive and I know we’ll continue to take steps forward, of course the second race I feel could have been a lot better but we got the penalty lane and I committed to it!

“I tried to get around it as fast as I could not to lose any time, but when you go too hard sometimes you wreak the tyre and that’s what happened, and by the time the safety car came round we didn’t have anything to give back. But you know this is racing and I look forward to Oulton and getting a good test under our belts on Thursday.”

After the opening round, Irwin finds himself seventh in the championship standings – only one point behind Luke Stapleford in sixth.

“Of course you always want more, but where we finished in race two, if I’m honest that’s where I thought we’d be running around to start with. The test we had here the other week was waste of time really with the different weather conditions, so we had to go back to the drawing board when we got here with the warmer conditions.

“I’m happy with the progress and the direction we made over the weekend, as well as how the team are working and gelling together, that is such a key point and we can build on so much more. From a BSB/Superbike side I’m pleased with how we finished Race 2 and I think it bodes well moving to Oulton Park.”

Irwin and the Honda Racing team will now prepare for Thursday’s (25 April) one-day official test at Oulton Park,  before heading back to the Cheshire circuit for round two on 4-6 May 2019.