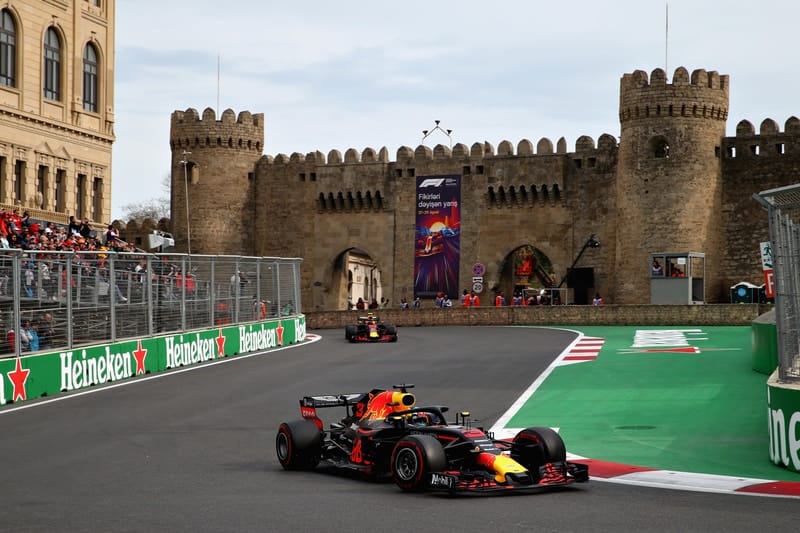 The Baku City Circuit will host the fourth round of the 2019 FIA Formula 1 World Championship this weekend (26 -28 April 2019). This will be the fourth running of the Azerbaijan GP at Baku, the capital of Azerbaijan.

The country is situated at the crossroads of Asia and Europe. The very first Grand Prix held here in 2016 was called the Grand Prix of Europe, before it was rebranded as the Azerbaijan GP in 2017. The inaugural race was won by Nico Rosberg for Mercedes.

Baku city is dotted by historic landmarks and is called the “City of Winds”. The race will end the first-leg of flyaway races as the championship returns to Europe with the Spanish Grand Prix in May.

What happened at the Chinese Grand Prix?

Lewis Hamilton won the 2019 Chinese Grand Prix for his second win of the season. Valtteri Bottas finished second as the Silver Arrows clinched the third consecutive 1-2 finish of the season.

The Mercedes duo locked out the front row in qualification with Bottas in pole position. The Ferrari drivers, Sebastian Vettel and Charles Leclerc, started on the second row. The Red Bull Racing drivers, Max Verstappen and Pierre Gasly, lined up on the third row.

On lap 1 at Turn 6, Daniil Kvyat first steered into Carlos Sainz and then hit his team-mate Lando Norris which dropped both McLaren drivers to the back of the field. The Virtual Safety Car was deployed and Kvyat was given a drive-through penalty.

Hamilton was serenely building a comfortable gap to Bottas in front. Meanwhile, Vettel had closed up to Leclerc and Ferrari team orders were deployed to let Vettel pass him. Leclerc was left out too long in both his stints which saw him finish in fifth position.

During the second set of pit stops, Mercedes double-stacked their drivers and executed a perfect pit stop. On a dominant day for the Silver Arrows in F1’s 1000th race, Hamilton and Bottas scripted a comfortable 1-2 finish for the team. Vettel joined them on the podium.

Verstappen finished ahead of Leclerc in fourth position. Gasly finished in sixth position and after a late pit stop stole the point for fastest lap on the final lap. Ricciardo finished in seventh-place for his first points of the season. Perez finished in eighth position to score points for the second race in a row.

What happened in the 2018 Azerbaijan Grand Prix?

The last two races on the tight Baku street circuit have thrown up unexpected results. In 2017, Ricciardo won the race from tenth position as carbon fiber flew all around him and tempers flared. Vettel incurred a penalty after running into Hamilton in anger because he felt the Briton had brake-tested him during a Safety car restart.

The 2018 Grand Prix was no less frantic than the previous year. Vettel was on pole for the third consecutive race of the 2018 season. Title-rival Hamilton joined the German on the front row. Bottas and Ricciardo were on the second row. Verstappen and Raikkonen lined up on the third row.

With the Safety Car deployed with only 11 laps to go, Bottas who had gambled by staying out pitted and emerged in the lead again. Vettel, Hamilton and Raikkonen also pitted and came out behind him.

As the Safety Car period stretched out in the cool conditions, the drivers complained about cold tyres and the lack of grip. Grosjean weaved around behind the Safety Car to keep his tyres warm and crashed into the barriers.

The Safety Car period was further extended as Grosjean’s car was on a part of the track where it was hard to retrieve. The laps wound down and the drivers bunched up in the front behind the SC, all on new tyres.

Finally on lap 48 of the 51 laps, the Safety Car came in. Bottas controlled the restart well. Vettel was determined to overtake Bottas for the win and overcooked his move and ran deep. Bottas, Hamilton and Räikkönen passed him. Vettel had flat-spotted his tyres and was overtaken by Perez.

Bottas ran over some debris on the track which caused a puncture and ended his race. Bottas had driven a well-crafted race and did not deserve the cruel end. Hamilton was now the race leader and clinched one of the most unlikely wins of his career.

Räikkönen had survived the first lap mayhem to finish in second position. Perez also a victim of the first lap melee completed the podium places. This was the Mexican’s second podium finish in three races at Baku.

Vettel finished a disappointing fourth. Sainz was fifth after a strong race. Leclerc, the then rookie driver in a Sauber, finished sixth and was voted the “Driver of the Day”.

A big finish for @Charles_Leclerc in Baku

The 6.003 km anti-clockwise Baku City Circuit is a tight street circuit created around the landmarks of Baku. Unlike the twisty street circuits in Monaco and Singapore, the circuit here has long high-speed straights. Overtaking is also possible.

The cars have to be setup for the high speed sections of Sector 1 and Sector 3 which require low downforce and the twisty Sector 2 which requires high downforce.

The teams that find the sweet spot in the setups of this technically challenging circuit will perform well.

The track features a series of twenty corners with two very long straights. The circuit demands a low to medium downforce setup. The brake wear is high and energy consumption is medium on this second longest track on the Formula 1 calendar.

Sector 1 (Turn 1 to Turn 4) offers good overtaking opportunities at turn 1 and will see the drivers jostling for positions at the start of the race. The sector includes a series of ninety-degree turns connected by straights.

Sector 3 (Turn 16 to Turn 20) features the longest straight of the circuit of two kilometers and leads to the start-finish line.

The long straights offer good overtaking opportunities. In the first race here, Rosberg won from pole. In the 2017 race, Ricciardo showed it was a good track to overtake as he won from tenth place.

Just a few reasons why the #AzerbaijanGP has become a modern classic!https://t.co/NrEPQS7YXv

The white-striped hard tyres (C2), the yellow-striped medium tyres (C3) and the red-striped soft tyres (C4) nominated for this race comes from the middle of the Pirelli range of tyres. The same set of tyres was nominated at the previous race in China.

Like all street circuits, the track offers low grip in the first practice sessions and improves as the track rubbers in. Last year a two pit stop strategy was the winning strategy. The Safety Cars in the races in the last two years has influenced the pit stop strategies of the teams.

The cooler track temperatures at this time of the year will influence the tyre degradation. Around the Baku street circuit the temperature varies around the track depending on the shady or sunny parts of the circuit. The smooth track surface also makes it a challenge to get heat into the tyres and get them into the right operating window.

What should we look out for this year?

In the last two years, the Azerbaijan Grand Prix has had Safety Cars and unexpected winners. The narrow track has caused collisions and crashes leading to unpredictable races. It will be interesting to see if the pattern will be repeated at this fast, but narrow street circuit this year.

Mercedes has won two of the three races held at Baku. After the winning start after the first three races of the season, they will go into this race as the favourites.

Ferrari will bring new updates to the SF90 car to improve the aerodynamic performance at the Baku Street Circuit. The long straights will play to the strengths of the Ferrari car and Power Unit.

Red Bull Racing was not close in performance to the top two teams in China. This track is unlikely to see them close the gap. The Red Bull and Toro Rosso drivers will have an upgraded Honda engine for this race. The Japanese manufacturer will introduce a new internal combustion engine to improve reliability and performance. Renault was the “best of the rest” in the last race, but reliability issues saw just one car finish.

Alfa Romeo Racing has performed well on the back of just one driver Räikkönen delivering all the points. Haas F1 team has struggled in the last two races with tyre management. The midfield teams will be in a tight battle once again.

Hamilton (68 points) is now leading team-mate Bottas by six points in the drivers’ championship. Mercedes (130 points) has a comfortable 57-point lead over Ferrari (73 points) in the constructors’ championship. The reigning world champions are setting the early season pace. The other teams and drivers have a lot of catching up to do.

How can I keep up with the action?

Follow all the action at the Checkered Flag with our extensive coverage, quotes and analysis of every session of the Azerbaijan Grand Prix.